Tala is a town in Machakos County, located in the lower eastern region of Kenya and about 56 kilometres east of the Kenyan capital, Nairobi. It is usually classified as being one town with Kangundo, due to their close proximity. It is 3,000 ft above sea level. Tala is a location of Matungulu division.[2] It also part of Matungulu Constituency.

The main language spoken is Kikamba although the people who live there understand both Swahili and English.

Officially Kangundo is located in Nairobi Metro and its population when combined with Tala is the 8th largest of any urban area in Kenya. Tala is part of Kangundo town council.[3] The CDF office of Matungulu Constituency is also located in the town. 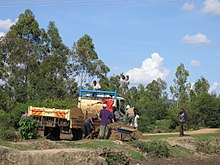 Many of its residents are Kambas who practice subsistence farming on rural farms. The land holding size is relatively small and population density is high. Open-air markets are located in downtown Tala and main market days are Tuesday and Friday. Farmers come to sell their wares on this days which include paw paws, bananas, arrow roots, cowpea leaves (a vegetable delicacy in the area), maize and beans. Livestock trading is also a major enterprise during the market days. Crops grown are mostly maize, bean, sorghum, millet, sweet potatoes, onions, bananas and others which can cope with the tropical climate of the area. Apart from the mentioned crops, farmers also grow coffee as a cash crop. Initially, the returns were good but farmers keep on complaining of low prices which has led to the neglect of the crop. However, farmers who mill their coffee and take it directly to KPCU make good profits.

There are two rainy seasons during the year from November–January and again from March–April. February and May are the main harvesting periods and June–August are the colder months.

In October 2007, a number of students from King George V School in Hong Kong took part in a charity and service trip to Tala Boys' Primary School and Children's Home, where they spent days interacting with the children, renovating the classrooms and building pavements for those in need. 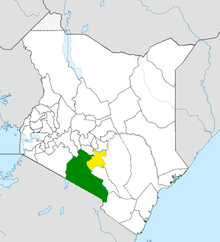 Machakos County is within Greater Nairobi which consists of 4 out of 47 counties in Kenya but the area generates about 60% of the nations wealth.[4][5] The counties are:

Retrieved from "https://en.wikipedia.org/w/index.php?title=Tala,_Kenya&oldid=957958279"
Categories:
Hidden categories:
The article is a derivative under the Creative Commons Attribution-ShareAlike License. A link to the original article can be found here and attribution parties here. By using this site, you agree to the Terms of Use. Gpedia Ⓡ is a registered trademark of the Cyberajah Pty Ltd.