The American Conservative (TAC) is a magazine published by the American Ideas Institute which was founded in 2002. The publication states that it exists to promote a conservatism that opposes unchecked power in government and business; promote the flourishing of families and communities through vibrant markets and free people; and embrace realism and restraint in foreign affairs based on America's national interests, otherwise known as paleoconservatism.[3] Originally published twice a month, it was reduced to monthly publication in August 2009, and since February 2013, it has been bi-monthly.[4] 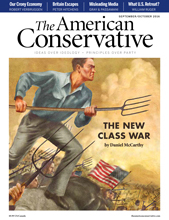 The American Conservative was founded by Pat Buchanan, Scott McConnell and Taki Theodoracopulos in 2002 in opposition to the Iraq War. Daniel Strauss wrote:

Before the 2006 midterm elections, The American Conservative urged its readers to vote for Democrats: "It should surprise few readers that we think a vote that is seen—in America and the world at large—as a decisive “No” vote on the Bush presidency is the best outcome".[6]

As of 2007, Buchanan and Taki ceased to be involved with the editorial operations of The American Conservative, although Buchanan continues to contribute columns.[7] Ron Unz was named publisher in 2007.[8][9] In 2011, Wick Allison became the magazine's publisher, followed in 2013 by Jon Basil Utley, the current publisher.[2]

In 2010, Daniel McCarthy succeeded Kara Hopkins as editor. In September 2011, the magazine introduced an editorial redesign of its print publication and in May 2012 a redesign of its website. In October 2014, Benjamin Schwarz, the former national and literary editor of The Atlantic, was named national editor of the magazine.[10]

In 2009, Reihan Salam, National Review editor,[12] wrote that the publication had "gained a devoted following as a sharp critic of the conservative mainstream".[13]

In 2012, David Brooks, columnist at The New York Times, wrote:

The American Conservative has become one of the more dynamic spots on the political Web. Writers like Rod Dreher and Daniel Larison tend to be suspicious of bigness: big corporations, big government, a big military, concentrated power and concentrated wealth. Writers at that Web site, and at the temperamentally aligned Front Porch Republic, treasure tight communities and local bonds. They’re alert to the ways capitalism can erode community. Dispositionally, they are more Walker Percy than Pat Robertson.[14]

Retrieved from "https://en.wikipedia.org/w/index.php?title=The_American_Conservative&oldid=964550451"
Categories:
Hidden categories:
The article is a derivative under the Creative Commons Attribution-ShareAlike License. A link to the original article can be found here and attribution parties here. By using this site, you agree to the Terms of Use. Gpedia Ⓡ is a registered trademark of the Cyberajah Pty Ltd.