The Church at Ponce & Highland 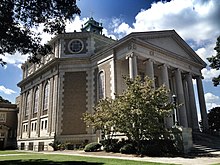 The Church at Ponce & Highland

The Church at Ponce & Highland is a Baptist church, founded in July 1914 and located at 1085 Ponce de Leon Ave NE at the corner of Highland Avenue in the Poncey–Highland neighborhood in the city of Atlanta. Designed by architect Edward Emmett Dougherty (b. 1876), the Beaux-Arts Style building is remarkable[1] for its massive columns and the orb-shaped designs woodwork surrounding the baptistery.[2]

The first meeting of the church in 1914 was at the corner of Highland and Greenwood Avenues in Highland Park subdivision of what is now Virginia–Highland. While there, they used the facilities of the now defunct Highland Park Baptist Church. In 1918 the congregation acquired the land for the present day church at the corner of Highland and Ponce. The building was inaugurated in 1928 and in July 2014 the church celebrated its centennial year in that very building.[3][4]

The Church at Ponce & Highland was known as Druid Hills Baptist Church from its inception until 2015.[5]

In July 1928, when the present sanctuary on Ponce De Leon Ave opened for the first time, 1700 people filled the sanctuary with overflow moving into the basement where speakers were set up for them to hear the service.[7] On April 7, 1929 there was an attendance of 1,557 in worship to support the installment of the new pastor, Louie De Votie Newton.[7] October of that same year Sunday school rolls show there were 2,567 currently attending Sunday school regularly while church attendance hovered around 1,900.[7]