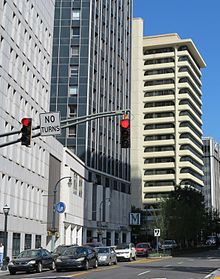 The Metropolitan is a condominium building at 20 Marietta Street NW at the southeast corner of Broad Street in the Five Points district of Downtown Atlanta. It was built in 1911 as the Third National Bank Building. It was later the Atlanta Federal Savings and Loan Building,[1][2] and in the 1960s was resurfaced with dark glass.[3] It was converted into condominiums in 1996.[4]

Retrieved from "https://en.wikipedia.org/w/index.php?title=The_Metropolitan_(Atlanta_condominium_building)&oldid=852665559"
Categories:
Hidden categories:
The article is a derivative under the Creative Commons Attribution-ShareAlike License. A link to the original article can be found here and attribution parties here. By using this site, you agree to the Terms of Use. Gpedia Ⓡ is a registered trademark of the Cyberajah Pty Ltd.