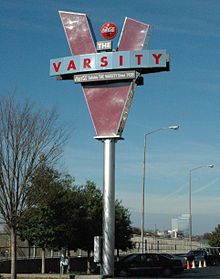 The famous Varsity 'V' sign as seen from the Downtown Connector.

The Varsity is a restaurant chain, iconic in the modern culture of Atlanta, Georgia.[2] The main branch of the chain is the largest drive-in fast food restaurant in the world[3] taking up two city blocks and can accommodate 800 diners.[4] There are now six other branches across metropolitan Atlanta, including one near the University of Georgia in Athens.[5]

Originally named "The Yellow Jacket", The Varsity was established in 1928 at the corner of Luckie Street and Hemphill Avenue in Midtown Atlanta.[6] Its founder, Frank Gordy[7] of Thomaston, Georgia, a Reinhardt University graduate, briefly attended The Georgia Institute of Technology (Georgia Tech) but dropped out in 1925. As the business grew, Gordy was forced to move the restaurant to 61 North Avenue (on the northwest corner of Spring Street). To accommodate the crowds, the present structure now covers two city blocks. It was here that the name was changed to "The Varsity," reflecting his desire to expand to other college campuses. During the drive-in era, The Varsity began its curbside service, which continues to this day.

The current location in Atlanta is now adjacent to the Downtown Connector's interchange with North Avenue. When that freeway (now I-75/85) was built by GDOT, it took out several blocks of Williams Street and much of The Varsity's western parking lot, forcing a parking garage to be erected as a replacement. The restaurant and the Georgia Tech campus sit on opposite sides of the Connector, linked by the North Avenue bridge.[8] The first Athens location opened in 1932.

The enterprise has since expanded to Athens, Kennesaw, Gwinnett County, Alpharetta, and Dawsonville.[9] The Alpharetta location closed on February 1, 2016, and the building has since been demolished. The Varsity, Jr., located in northeast Atlanta, was the only other location of the chain to offer curbside service. The Varsity, Jr. closed in August 2010 after more than 40 years at that location, after the city of Atlanta failed to approve the chain's plans to replace that building. The plans for the new Varsity, Jr. were instead used for the new location in Dawsonville. The restaurant offers catering services to the metro Atlanta region for both corporate and non-corporate functions, going as far east as Conyers and Stone Mountain, Georgia.

There is also a mini-Varsity on the campus of Reinhardt University in Waleska, Georgia. Frank Gordy met his wife, Evelyn, at Reinhardt in 1924 and went on to Georgia Tech to finish his education. Their custom-designed home was later moved from Atlanta to the Reinhardt University campus. The Gordy family gave part of their land to Cobb County for what is now the Mountain View campus of Chattahoochee Technical College and the Mountain View Aquatics Center, the rest was sold in the 1990s for upscale tract housing and strip malls. Gordy Parkway, a loop named for Frank Gordy, serves all of these.

One of the best-known employees at the Varsity was Erby Walker, who worked there for 45 years until he died in 2008. He started at the Varsity at the age of 15 sweeping floors, and was nearly fired on the first day, but soon graduated to the kitchen. Mr. Walker was noted for his ability to move the service line quickly, especially during the rush period right before a Georgia Tech football game. His signature catchphrase was, "Have your money out and your food on your mind, and I'll getcha to the game on time!" He retired in 2003, but came back three weeks later. That year Walker was inducted into the Atlanta Convention and Visitors Bureau Hospitality Hall of Fame.[10]

The Varsity on North Ave. on a Saturday night.

Comedian Nipsey Russell began his entertainment career at The Varsity in the 1940s as a carhop. The creative and resourceful Russell would dress in a flamboyant style and pepper his order-taking duties with jokes and amusing songs, thereby earning him extra tips.[11] U.S. presidents Jimmy Carter, George H. W. Bush, Bill Clinton and Barack Obama all visited The Varsity during their terms in office. Mad artist Jack Davis has done advertising for The Varsity.

The Varsity was featured in the PBS documentary A Hot Dog Program by Rick Sebak.[12] It also appeared in the movie We Are Marshall while the coaches are recruiting players.

A meal at The Varsity

Varsity catering at the Georgia International Horse Park in Conyers during the Celebrate Freedom 2007 concert on September 1, 2007

Varsity catering at the House of Cheatham facility in Stone Mountain, Georgia on March 6, 2008

Retrieved from "https://en.wikipedia.org/w/index.php?title=The_Varsity&oldid=961959602"
Categories:
Hidden categories:
The article is a derivative under the Creative Commons Attribution-ShareAlike License. A link to the original article can be found here and attribution parties here. By using this site, you agree to the Terms of Use. Gpedia Ⓡ is a registered trademark of the Cyberajah Pty Ltd.