Jump to navigation Jump to search
One of the oldest building of the Library of Congress, USA

The oldest of the four United States Library of Congress buildings, the Thomas Jefferson Building was built between 1890 and 1897. It was originally known as the Library of Congress Building and is located on First Street SE, between Independence Avenue and East Capitol Street in Washington, D.C. The Beaux-Arts style building is known for its classicizing facade and elaborately decorated interior. Its design and construction has a tortuous history; the building's main architect was Paul J. Pelz, initially in partnership with John L. Smithmeyer, and succeeded by Edward Pearce Casey during the last few years of construction. The building was designated a National Historic Landmark in 1965. 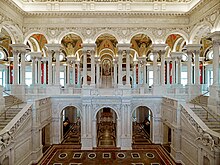 The Great Hall, View of first and second floors, with Minerva mosaic in background

John L. Smithmeyer and Paul J. Pelz won the competition for the architectural plans of the library in 1873. The start of the project was delayed by congressional debates until a vote in 1886. In 1888, Smithmeyer was dismissed and Pelz became the lead architect. Pelz was himself dismissed in 1892 and replaced by Edward Pearce Casey, the son of Brig. Gen. Thomas Lincoln Casey, Chief of the U.S. Army Corps of Engineers, who at the time was in charge of the building's construction.[1] While Smithmeyer was instrumental in securing the commission, Pelz appears to have been the main designer of the building and oversaw most of the exterior work. Casey is credited for the completion of the interiors and the artistic supervision of the building's unique decorative program.[2] The Library opened to the public in 1897 and the finishing work was completed in 1898.

The Thomas Jefferson Building, containing some of the richest public interiors in the United States, is a compendium of the work of classically trained American sculptors and painters[3] of the "American Renaissance", in programs of symbolic content that exhibited the progress of civilization, personified in Great Men and culminating in the American official culture of the Gilded Age;[4] the programs were in many cases set out by the Librarian of Congress, Ainsworth Rand Spofford. The central block is broadly comparable to the Palais Garnier in Paris, a similarly ambitious expression of triumphant cultural nationalism in the Beaux-Arts style that had triumphed at the World's Columbian Exposition in Chicago, 1893. On the exterior, sculptured portrait heads that were considered typical of the world's races were installed as keystones on the main storey's window arches. The second-floor portico of the front entrance facing the U.S. Capitol features nine prominent busts of Great Men as selected by Ainsworth Rand Spofford in accordance with Gilded Age ideals. From left to right when one faces the building, they are Demosthenes (portico north side), Ralph Waldo Emerson, Washington Irving, Johann Wolfgang von Goethe, Benjamin Franklin, Thomas Babbington Macaulay, Nathaniel Hawthorne, Sir Walter Scott and Dante Alighieri (portico south side). The sculptors were Herbert Adams, Jonathan Scott Hartley and Frederick W. Ruckstull. The Court of Neptune Fountain centered on the entrance front invites comparison with the Trevi Fountain; its sculptor was Roland Hinton Perry. The copper dome, originally gilded, was criticized at the structure's completion, as too competitive with the national Capitol Building. 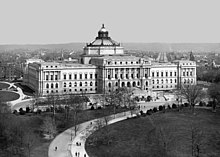 Needing more room for its increasing collection, the Library of Congress under Librarian Ainsworth Rand Spofford suggested to the Congress that a new building be built specifically to serve as the American national library. Prior to this the Library existed in a wing of the Capitol Building. The new building was needed partly because of the growing Congress, but also partly because of the Copyright Law of 1870, which required all copyright applicants to send to the Library two copies of their work. This resulted in a flood of books, pamphlets, maps, music, prints and photographs. Spofford had been instrumental in the enactment of this law.

After Congress approved construction of the building in 1886, it took eleven years to complete. The building opened to the public on November 1, 1897, met with wide approval and was immediately seen as a national monument. The building name was changed on June 13, 1980 to honor former U.S. President Thomas Jefferson, who had been a key figure in the establishment of the Library in 1800. Jefferson offered to sell his personal book collection to Congress in September 1814, one month after the British had burned the Capitol in the War of 1812. 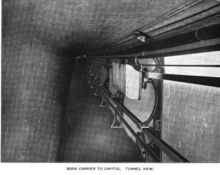 Inside the book tunnel

Prior to the 2000s, the Jefferson Building was linked to the Capitol Building by a purpose built book tunnel.[5] This housed an electric "book conveying apparatus" that could transport volumes between the two buildings at 600 feet per minute.[6] A portion of the book tunnel was destroyed to make room for the underground Capitol Visitor Center, which opened in 2008.

Senate, House and Supreme Court pages formerly attended school together in the Capitol Page School located on the attic level above the Great Hall. Upon the separation of the programs (and the closure of the Supreme Court Page Program), the schools split. Senate Pages now attend school in the basement of their dormitory. The House Page Program was closed in August 2011. A small suite in the northwest corner of the attic level remains home to the official office of the Poet Laureate of the United States.

The Elizabeth Sprague Coolidge Auditorium, which opened in October, 1925, has been home to more than 2,000 concerts, primarily of classical chamber music, but occasionally also of jazz, folk music, and special presentations.[7] Some performances make use of the Library's extensive collection of musical instruments and manuscripts. Most of the performances are free and open to the public.

Elizabeth Sprague Coolidge was a wealthy patron of the arts and was no relation to Calvin Coolidge, who, coincidentally, was President of the United States at the time the Coolidge auditorium was established.

Retrieved from "https://en.wikipedia.org/w/index.php?title=Thomas_Jefferson_Building&oldid=998112665"
Categories:
Hidden categories:
The article is a derivative under the Creative Commons Attribution-ShareAlike License. A link to the original article can be found here and attribution parties here. By using this site, you agree to the Terms of Use. Gpedia Ⓡ is a registered trademark of the Cyberajah Pty Ltd.