Tobacco in the United States

Tobacco has a long history in the United States.

Main article: History of commercial tobacco in the United States 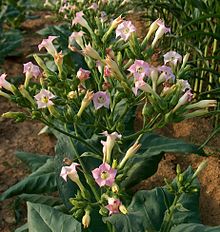 In 1612, John Rolfe arrived in Jamestown to find the colonists there struggling and starving.[4] He had brought with him a new species of tobacco known as nicotiana tabacum.[5] This species was preferable to the native nicotiana rustica as it was much smoother.[6] It is unknown where John Rolfe got the seeds for this new species of tobacco, as the sale of the seeds to a non-Spaniard was punishable by death.[5] However, this new nicotiana tabacum proved to be very popular in England and the first shipment was sent in 1614. By 1639, 750 tons of tobacco had been shipped to England.[7]

Cultivation of tobacco at Jamestown 1615

In the period of 1619 to 1629, the average tobacco farmer was expected to produce 712 pounds of tobacco in a year. By the period of 1680 to 1699, the output per worker was 1,710 pounds of tobacco in a year.[8] These increases in productivity were brought about primarily from relocation and better farming techniques. While early tobacco cultivation techniques were relatively rudimentary, colonial farmers quickly developed more efficient techniques.[9] Tobacco will wear out the soil in just a few years and this necessitated farmers to relocate from coastal areas up rivers in the Chesapeake Bay area.[10] Production was further increased by the use of slave labor on larger farms. On the frontier, hired help would both farm the tobacco and protect farms from Indian raids.[11]

In 1621, King James prohibited the production of tobacco in England, limiting its growth to the colonies in America.[11] While it would take many years for this to take effect, it influenced other policies. In reaction to this, the colonies would pass legislation like the Tobacco Inspection Act of 1730 in Virginia as a way to control the production of tobacco and raise its price. Legislation was also passed as a way of ensuring that low-quality trash tobacco was not being shipped or used for the payment of taxes.[12] This series of legislation on both sides of the Atlantic to exert control over the tobacco industry would continue until the American Revolutionary War.[11]

Due to the Revolutionary War, Southern exports dropped by 39% from the upper South and almost 50% from the lower South. Lack of domestic market growth exasperated these effects and a stagnated tobacco industry failed to fully recover as cotton became the main cash crop of the south going forward.[13]

Economic growth in the early colonies

Tobacco played a huge role in the development of the early Chesapeake Colonies. With the early tobacco boom in Virginia and the expansion of trade with England, the value of tobacco soared and provided an incentive for a large influx of colonists. In Virginia, the rough climate made it difficult for the colonists to produce crops that were necessary for survival. Due to this difficulty, the colonists lacked a source of income and food.[10] The colonists of Virginia began to grow tobacco. Tobacco brought the colonists a large source of revenue that was used to pay taxes and fines, purchase slaves, and to purchase manufactured goods from England.[11] As the colonies grew, so did their production of tobacco. Slaves and indentured servants were brought into the colonies to participate in tobacco farming.[14] It has been said that some colonies would have continued to fail had it not been for the production of tobacco.[15][16] Tobacco provided the early colonies with an opportunity for expansion and economic success.[10][11]

British mercantilism and monopolization of the tobacco trade

As early as 1621, only 14 years after the establishment of a colony in Virginia and just 9 years after John Rolfe discovered the economic potential of tobacco in America, British merchants were on the march in an attempt to control the tobacco trade.[11] A measure was introduced into the British Parliament in 1621 with two major components: a restriction on tobacco importation from anywhere with the exception of Virginia and the British West Indies and an edict that tobacco was not to be grown and cultivated anywhere else within England.[17] The objective of the merchants was to monopolize and control all means of tobacco distribution within Europe and throughout the world. By doing so it was possible to secure a stable return on investment for the American Colonies and profit tremendously within Europe. The British merchants influenced economies using the power of the nation-state to influence and protect business interests. In exchange, taxes were levied in order to fund political interests. The bill that the merchants put forward in 1621 to Parliament was a classic example of the power and influence of mercantilism.

The measure passed the House of Commons although it was defeated in the House of Lords. Despite this defeat the measure eventually was pushed through by proclamation from King James.[11] Ironically King James had very strong opinions against the use of tobacco, pointing to the ill health effects and social impact of those that used tobacco [18] Despite these grievances the King was then able to capture import duties on tobacco and in exchange monopoly power was granted to the merchants.

The measures also prevented any foreign ships from carrying colonial tobacco.[11] This monopolization became extremely profitable and flourished during the 1600s. The economy of Virginia was extremely dependent on the tobacco trade. So much so that subtle shifts in demand and prices dramatically affected the Virginian economy as a whole.[10] This led to several booms and busts related to tobacco. The price of tobacco dropped from 6.50 pennies per pound in the 1620s down to as low as .80 pennies per pound in the 1690s. This downward trending triggered a whole series of crop controls and government sponsored price manipulations throughout the 1600s to try to stabilize pricing, but to no avail.[11] 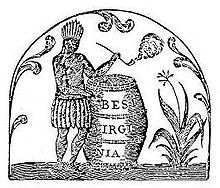 By the mid 1620s tobacco became the most common commodity for bartering due to the increasing scarcity of gold and silver and the decreasing value of wampum from forgery and overproduction. In order to help with accounting and standardizing trade, colonial government officials would rate tobacco and compare its weight into values of pounds, shillings, and pence.[19] The popularity of American tobacco increased dramatically in the colonial period eventually leading to English goods being traded equally with tobacco. Because England's climate did not allow for the same quality of tobacco as that grown in America, the colonists did not have to worry about scarcity of tobacco. This eventually led to tobacco being the main form of trade with England.

Imports of tobacco into England increased from 60,000 pounds in 1622 to 500,000 pounds in 1628, and to 1,500,000 pounds in 1639. Such dramatic growth in demand for tobacco eventually led to overproduction of the commodity, and in turn extreme devaluation of tobacco. To compensate for the loss of value, farmers would add dirt and leaves to increase the weight, but lowering the quality.[20] From the 1640s to the 1690s the value of tobacco would be highly unstable, government officials would help stabilize tobacco by reducing the amount of tobacco produced, standardizing the size of a tobacco hogshead, and prohibiting shipments of bulk tobacco. Eventually the tobacco currency would stabilize in the early 1700s but would be short lived as farmers started cutting back on growing tobacco. In the 1730s tobacco crops were being replaced with food crops as the colonies moved closer to revolution with England.[10]

Current smoking among adults in 2016 (nation)

According to the research, for every 100 U.S adults, age 18 or older, more than 15 smoked cigarettes in 2016. In other words, there are about 37.8 million cases of cigarette smokers in the United States. More than 16 million Americans are living with a smoking and disease smoking-related disease. However, the number of smokers in 2016 has decreased to 15.5% which is a 5.4% difference from 2005. This shows an increase in the number of smokers who have quit. Men smoke at a higher rate than women. At every 100 adults, men nearly got 4 more cases than women.[21]

Some of the notable tobacco companies in the US are:

There has been intensive lobbying in the US to portray smoking as a harmless activity. The Insider is a 1999 feature film about the production of a news segment exposing Big Tobacco.

A half million children work in the fields of America picking food in 2012. In eastern North Carolina, children have been interviewed as young as fourteen who worked harvesting tobacco, and recent news reports describe children as young as nine and ten doing such work. Federal law provides no minimum age for work on small farms with parental permission, and children ages twelve and up may work for hire on any size farm for unlimited periods outside school hours. According to Human Rights Watch, farm-work is the most hazardous occupation open to children.[26][27]

Retrieved from "https://en.wikipedia.org/w/index.php?title=Tobacco_in_the_United_States&oldid=938560559"
Categories:
Hidden categories:
The article is a derivative under the Creative Commons Attribution-ShareAlike License. A link to the original article can be found here and attribution parties here. By using this site, you agree to the Terms of Use. Gpedia Ⓡ is a registered trademark of the Cyberajah Pty Ltd.