Jump to navigation Jump to search
Municipality in Nordland, Norway

Træna is a municipality in Nordland county, Norway. It is part of the Helgeland traditional region. The administrative centre of the municipality is the island/village of Husøya. Other population centres include Selvær and Sanna. 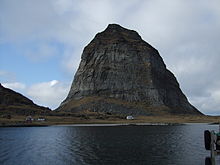 Fishing is the economic mainstay of Træna. Connections to mainland Norway are by means of boat and ferry. Routes are provided to Sandnessjøen, Nesna, and Stokkvågen. Each year Træna plays hosts a music festival called Traena Music Festival. The islands of Træna have been the site of a number of archeological discoveries, indicating that the island has been populated since the Stone Age.

The municipality is named after the island group of Træna (Old Norse: Þriðna). The name is probably derived from the number þrír which means "three" and then referring to three peaks on the island. Historically, the name was spelled Trænen.[6]

The coat of arms was granted on 24 July 1987. The arms show a red background with three gold-colored fishhooks made of bone from the Stone Age. These hooks symbolize the importance of fishing in the municipality and the historic bone hooks found in the local Kirkhelleren cave.[7]

See also: the coats of arms of Båtsfjord, Frøya, and Øksnes

The Church of Norway has one parish (sokn) within the municipality of Træna. It is part of the Nord-Helgeland prosti (deanery) in the Diocese of Sør-Hålogaland.

The municipality consists of over one thousand small islands off the coast of Norway. Four of the islands are populated: Husøya, Selvær, Sanna, and Sandøy. The islands lie along the Trænfjorden to the southeast and the Norwegian Sea to the west. Træna Lighthouse is located in the southern part of the municipality.

All municipalities in Norway, including Træna, are responsible for primary education (through 10th grade), outpatient health services, senior citizen services, unemployment and other social services, zoning, economic development, and municipal roads. The municipality is governed by a municipal council of elected representatives, which in turn elect a mayor.[8] The municipality falls under the Rana District Court and the Hålogaland Court of Appeal.

The municipal council (Kommunestyre) of Træna is made up of 11 representatives that are elected to four year terms. The party breakdown of the council is as follows:

Retrieved from "https://en.wikipedia.org/w/index.php?title=Træna&oldid=956567348"
Categories:
Hidden categories:
The article is a derivative under the Creative Commons Attribution-ShareAlike License. A link to the original article can be found here and attribution parties here. By using this site, you agree to the Terms of Use. Gpedia Ⓡ is a registered trademark of the Cyberajah Pty Ltd.