The U.S. News's rankings of American and international colleges and universities is among the most used college rankings, along with Times Higher Education, Academic Ranking of World Universities, and QS World University Rankings.[1]

United States News was founded in 1933 by David Lawrence (1888–1973), who also started World Report in 1946. The two magazines covered national and international news separately, but Lawrence merged them into U.S. News & World Report in 1948.[2] He subsequently sold the magazine to his employees. Historically, the magazine tended to be slightly more conservative than its two primary competitors, Time and Newsweek, and focused more on economic, health, and education stories. It also eschewed sports, entertainment, and celebrity news.[3] Important milestones in the early history of the magazine include the introduction of the "Washington Whispers" column in 1934 and the "News You Can Use" column in 1952.[4][5] In 1958, the weekly magazine's circulation passed one million and reached two million by 1973.[4]

Since 1983, it has been known primarily for its influential ranking and annual reports of colleges and graduate schools, spanning across most fields and subjects. U.S. News & World Report is America's oldest and best-known ranker of academic institutions,[6] and covers the fields of business, law, medicine, engineering, education, social sciences and public affairs, in addition to many other areas.[7] Its print edition was consistently included in national bestseller lists, augmented by online subscriptions. Additional rankings published by U.S. News & World Report include hospitals, medical specialties and automobiles.

Starting in June 2008, the magazine reduced its publication frequency in three steps. In June 2008, citing the decline overall magazine circulation and advertising, U.S. News & World Report announced that it would become a biweekly publication, starting January 2009.[9] It hoped advertisers would be attracted to the schedule, which allowed ads to stay on newsstands a week longer. However, five months later the magazine changed its frequency again, becoming monthly.[10] In August 2008, U.S. News expanded and revamped its online opinion section.[11] The new version of the opinion page included daily new op-ed content as well as the new Thomas Jefferson Street blog.[12] An internal memo was sent on November 5, 2010, to the staff of the magazine informing them that the "December issue will be our last print monthly sent to subscribers, whose remaining print and digital replica subscriptions will be filled by other publishers."[13] The memo went on to say that the publication would be moving to a primarily digital format but that it would continue to print special issues such as "the college and grad guides, as well as hospital and personal finance guides". Prior to ending physical publication, U.S. News was generally the third-ranked general American newsmagazine after Time and Newsweek.[14] A weekly digital magazine, U.S. News Weekly, introduced in January 2009,[15] continued to offer subscription content until it ceased at the end of April 2015.[16]

The first of the U.S. News & World Report's famous rankings was its "Who Runs America?" surveys. These ran in the spring of each year from 1974 to 1986. The magazine would have a cover typically featuring persons selected by the USN & WR as being the ten most powerful persons in the United States. Every single edition of the series listed the President of the United States as the most powerful person, but the #2 position included such persons as Secretary of State Henry Kissinger (1974),[18] Federal Reserve Chairmen Paul Volcker and Arthur Burns (each listed multiple years) and US Senator Edward Kennedy (1979).[19] While most of the top ten each year were officials in government, occasionally others were included, including TV anchormen Walter Cronkite and Dan Rather, Chase Manhattan Bank Chairman David Rockefeller, AFL-CIO leader George Meany, and consumer advocate Ralph Nader. The only woman to make the top ten list was First Lady Rosalynn Carter in 1980.[20]

In addition to these overall top ten persons, the publication also included top persons in each of several fields, including Education, Business, Finance, Journalism, and many other areas. The survey was discontinued after 1986. 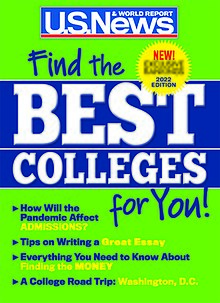 The popularity of U.S. News & World Report's Best Colleges rankings is reflected in its 2014 release, which brought 2.6 million unique visitors and 18.9 million page views to usnews.com in one day.[23] Traffic came from over 3,000 sites, including Facebook and Google.[23] U.S. News & World Report continues to publish comprehensive college guides in book form.[24] Robert Morse created the U.S. News Best Colleges rankings methodology, and continues to oversee its application as chief data strategist at U.S. News. In 2014, The Washington Post featured a profile of Morse, exploring his 30-year career with the publication.[25]

During the 1990s, several educational institutions in the United States were involved in a movement to boycott the U.S. News & World Report college rankings survey. The first was Reed College, which stopped submitting the survey in 1995. The survey was also criticized by Alma College, Stanford University, and St. John's College during the late 1990s.[26] SAT scores play a role in The U.S. News & World Report college rankings even though U.S. News is not empowered with the ability to formally verify or recalculate the scores that are represented to them by schools. Since the mid-1990s there have been many instances documented by the popular press wherein schools lied about their SAT scores in order to obtain a higher ranking.[27] An exposé in the San Francisco Chronicle stated that the elements in the methodology of U.S News & World Report's rankings are redundant and can be reduced to one thing: money.[28] On June 19, 2007, during the annual meeting of the Annapolis Group, members discussed the letter to college presidents asking them not to participate in the "reputation survey" section of the U.S. News & World Report survey (this section comprises 25% of the ranking).

As a result, "a majority of the approximately 80 presidents at the meeting said that they did not intend to participate in the U.S. News reputational rankings in the future."[29] The statement also said that its members "have agreed to participate in the development of an alternative common format that presents information about their colleges for students and their families to use in the college search process".[30] This database will be web-based and developed in conjunction with higher-education organizations including the National Association of Independent Colleges and Universities (NAICU) and the Council of Independent Colleges.

On June 22, 2007, U.S. News & World Report editor Robert Morse issued a response in which he argued, "in terms of the peer assessment survey, we at U.S. News firmly believe the survey has significant value because it allows us to measure the 'intangibles' of a college that we can't measure through statistical data. Plus, the reputation of a school can help get that all-important first job and plays a key part in which grad school someone will be able to get into. The peer survey is by nature subjective, but the technique of asking industry leaders to rate their competitors is a commonly accepted practice. The results from the peer survey also can act to level the playing field between private and public colleges."[31] In reference to the alternative database discussed by the Annapolis Group, Morse also argued, "It's important to point out that the Annapolis Group's stated goal of presenting college data in a common format has been tried before [...] U.S. News has been supplying this exact college information for many years already. And it appears that NAICU will be doing it with significantly less comparability and functionality. U.S. News first collects all these data (using an agreed-upon set of definitions from the Common Data Set). Then we post the data on our website in easily accessible, comparable tables. In other words, the Annapolis Group and the others in the NAICU initiative actually are following the lead of U.S. News."[31]

Some higher education experts, such as Kevin Carey of Education Sector, have asserted that U.S. News & World Report's college rankings system is merely a list of criteria that mirrors the superficial characteristics of elite colleges and universities. According to Carey, the U.S. News ranking system is deeply flawed. Instead of focusing on the fundamental issues of how well colleges and universities educate their students and how well they prepare them to be successful after college, the magazine's rankings are almost entirely a function of three factors: fame, wealth, and exclusivity. He suggests that there are more important characteristics parents and students should research to select colleges, such as how well students are learning and how likely students are to earn a degree.[32]

The question of college rankings and their impact on admissions gained greater attention in March 2007, when Dr. Michele Tolela Myers (the former President of Sarah Lawrence College) shared in an op-ed[33] that the U.S. News & World Report, when not given SAT scores for a university, chooses to simply rank the college with an invented SAT score of approximately one standard deviation (roughly 200 SAT points) behind those of peer colleges, with the reasoning being that SAT-optional universities will, because of their test-optional nature, accept higher numbers of less academically capable students.

In a 2011 article regarding the Sarah Lawrence controversy, Peter Sacks of The Huffington Post criticized the U.S. News rankings' centering on test scores and denounced the magazine's "best colleges" list as a scam:[34]

In the U.S. News worldview of college quality, it matters not a bit what students actually learn on campus, or how a college actually contributes to the intellectual, ethical and personal growth of students while on campus, or how that institution contributes to the public good [...] and then, when you consider that student SAT scores are profoundly correlated [to] parental income and education levels – the social class that a child is born into and grows up with – you begin to understand what a corrupt emperor 'America's Best Colleges' really is. The ranking amounts to little more than a pseudo-scientific and yet popularly legitimate tool for perpetuating inequality between educational haves and have nots – the rich families from the poor ones, and the well-endowed schools from the poorly endowed ones.

Since 1990, U.S. News & World Report has compiled the Best Hospitals rankings.[37] The Best Hospitals rankings are specifically based on a different methodology that looks at difficult (high acuity) cases within 16 specialties, including cancer; diabetes and endocrinology; ear, nose and throat; gastroenterology; geriatrics; gynecology; heart and heart surgery; kidney disorders; neurology and neurosurgery; ophthalmology; orthopedics; psychiatry; pulmonology; rehabilitation; rheumatology; and urology.[38][39] In addition to rankings for each of these specialties, hospitals that excel in many U.S. News areas are ranked in the Honor Roll.[40]

Since 2007, U.S. News has developed an innovative rankings system for new and used automobiles. The rankings span over 30 classes of cars, trucks, SUVs, minivans, wagons, and sports cars. Each automobile receives an overall score, as well as a performance, interior, and recommendation score to the nearest tenth on a 1-10 scale. Scores are based on the consensus opinion of America's trusted automotive experts, as well as reliability and safety data.[41] U.S. News also produces annual "Best Cars for the Money" and "Best Cars for Families" awards across approximately 20 classes of cars, trucks, SUVs, and minivans. Money award winners are derived by combining vehicle price and five-year cost of ownership with the opinion of the automotive press,[42] while family awards are tabulated by combining critics' opinions with the vehicle's availability of family-friendly features and interior space, as well as safety and reliability data. Money and family award winners are announced in February and March of each year, respectively.[43] 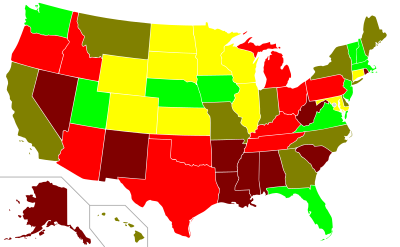 In 2017, U.S. News published its first ranking of all 50 U.S. states, incorporating metrics in seven categories: health care, education, crime and corrections, infrastructure, opportunity, economy, and government. The weighting of the individual categories in determining overall rank was informed by surveys on what matters most to residents. Massachusetts occupied the top rank, and Louisiana ranked worst.[44]