Uniformed Services University of the Health Sciences (USU) is a health science university of the U.S. federal government. The primary mission of the school is to prepare graduates for service to the U.S. at home and abroad in the medical corps as medical professionals, nurses, and physicians.

The university consists of the F. Edward Hébert School of Medicine, a medical school, which includes a full health sciences graduate education program, the Daniel K. Inouye Graduate School of Nursing, the Postgraduate Dental College, and the College of Allied Health Sciences. The university's main campus is located in Bethesda, Maryland. USU was established in 1972 under legislation sponsored by U.S. Representative Felix Edward Hébert of Louisiana. It graduated its first class in 1980. USU is accredited by the Commission of Education, Middle States Association of Colleges and Schools.

Uniformed Services University falls under the office of the Assistant Secretary of Defense for Health Affairs.[2]

All medical students enter the university as commissioned officers via direct commissions in the pay grade of O-1 or rank of second lieutenant in the U.S. Army or U.S. Air Force, or ensign in the U.S. Navy or the U.S. Public Health Service. No prior military service is required for admission to USU's medical school. Students who already hold military commissions at higher rank in the Army, Air Force and Navy are required to accept temporary administrative demotion to O-1 for medical school; officers of the U.S. Marine Corps, U.S. Coast Guard, or National Oceanic and Atmospheric Administration Commissioned Corps must resign their existing commissions and accept commissions in as O-1s in one of the other three authorized services.

Prior military service students in the Graduate School of Nursing or School of Medicine PhD programs may keep their officer rank, or will be commissioned as O-1 if previously enlisted.

Students pay no tuition or fees and receive the full salary and benefits of a uniformed military officer throughout their time at the university. In return, all military students incur an active duty commitment proportionate to their time at USU. Medical students have a minimum of a seven-year active duty service commitment and a six-year inactive ready reserve commitment following their internship and residency after graduation.

Students in the School of Medicine graduate programs are a mix of both civilians and uniformed officers of various ranks. They also pay no tuition or fees. Civilian students may receive stipends and uniformed graduate students continue to receive their active-duty pay and benefits while attending school at USU. The Graduate School of Nursing students are all active duty uniformed military nurses or nurses in federal civilian service. Neither pay tuition or fees at USU and both uniformed graduate students and nursing students maintain their rank and continue to receive their regular salaries while students at the university.

The postgraduate dental college offers a Master of Science in Oral Biology degree to students enrolled in selected graduate dental education programs of the Army, Air Force, and Navy. USU is one of many federal service graduate-level professional schools such as the Naval Postgraduate School, which has several Master of Science and Ph.D. programs.

The College of Allied Health Sciences (CAHS) is the newest college, established in 2017. It currently offers an Associate of Science degree to students at Medical Education & Training Campus (METC) who opt to enroll in CAHS after enrolling in their METC program. A Bachelor of Science will be offered in the future. 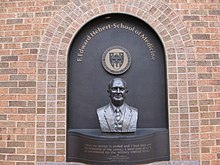 The medical college is named after Louisiana Congressman F. Edward Hebert, one of the longest serving members in the U.S. House of Representatives (1941–1977). Hebert was instrumental in the founding of USU in 1972.

With an average enrollment of approximately 170 students per class, the F. Edward Hébert School of Medicine is located in Bethesda, Maryland on the military installation of Naval Support Activity Bethesda (NSAB), sharing NSAB with the Walter Reed National Military Medical Center and is located along Maryland Route 355, across from the National Institutes of Health. The school is named in honor of former U.S. Representative Felix Edward Hébert.

Typically, the first-year class is composed of 63 Army students, 51 Air Force students, 51 Navy students, and two Public Health Service students. The Class of 2010 increased the Public Health Service student number to six. Students attending this institution receive free tuition, as well as reimbursement for all fees. They also receive salaries and benefits as junior officers. Textbooks are issued to the students at the beginning of each semester.

USU School of Medicine students are all active-duty uniformed officers during their schooling and receive pay and benefits at the grade of O-1 (second lieutenant for the Army and Air Force and ensign for the Navy and Public Health Service) – unless the student was prior service at a higher rank then that student will wear the O-1 rank but be paid at their previous pay grade. Upon graduation, medical students are promoted to the grade of O-3, (captain for the Army and Air Force, lieutenant for the Navy and Public Health Service), and are expected to serve at least seven years after residency on active duty and six years in the inactive ready reserve. Students graduating from the School of Medicine receive four years' credit toward military retirement once 20 years has been reached through military graduate medical education (residency/fellowship), practicing, and prior-service (if applicable).[3]

When the school was first formed, the United States Congress weighed whether to make each student a cadet or midshipman (like the military service academies) or to give students full active-duty officer status and promotion benefits. A compromise was reached whereby medical students were commissioned as O-1 grade officers, were not promoted while enrolled in the School of Medicine, and do not receive time in grade or time in service while enrolled in USU. However, this status puts USU Medical Students in a unique position; unlike the Graduate School of Nursing and other programs, School of Medicine students are barred from promotion. Additionally, prior-service commissioned officers must accept a demotion to O-1 in order to matriculate. Upon graduation, when these officers are promoted to O-3, half of the time spent in prior active duty service is then added to their time-in-service (TIS)/time-in-grade (TIG) and used toward promotion to the rank of major or lieutenant commander (O-4). However, as of 2008[update], prior service officers will be paid their former base pay while attending School of Medicine.

The curriculum at the School of Medicine begins with 1.5 years of basic sciences organized into organ-system based modules called "Molecules to Military Medicine". Additional courses include Parasitology, Combat Medical Skills, Military Medical History, Officer Professional Development, Military Applied Physiology, Epidemiology, and several other courses. The clerkship year begins in January of the second year, and is followed by the USMLE Step 1. After Step 1, students participate in an integrated advanced didactic module, "Bench to Bedside and Beyond", and then begin fourth year clerkships/subinternships. These clerkships are done at various military hospitals across the country.

USU is featured in the documentary Fighting for Life.

Students can indicate their intent to apply for the MD/PhD program on the USU secondary application and complete the graduate school application. Applicants not selected for the graduate school are still eligible for acceptance into the medical school. The combined MD/PhD program requires the same military commitment as the school of medicine. Three MD/PhD degrees are currently offered; neuroscience (NES), molecular and cell biology (MCB), and emerging infectious diseases (EID). Students remain civilian until graduate school requirements are completed. Degrees are not granted until completion of both graduate and medical requirements.

The graduate programs in biomedical sciences and public health in the School of Medicine are open to civilian and military applicants. Civilian students may apply to most of these programs. The faculty is composed of a mix of military and civilian professors. There is no tuition, stipends are guaranteed for three years, and no military service is required after graduation for civilian students. There also is no undergraduate teaching.

There are military students in the graduate programs, most notably the public health and tropical medicine programs and clinical psychology program. Generally, military students were in the military before beginning their graduate training, but some commission as they enter their programs.

The Masters of Nursing Science and Doctor of Nursing Practice degrees at USU are accredited by the Commission on Collegiate Nursing Education, and The Nurse Anesthesia Program is fully accredited by the Council on Accreditation of Nurse Anesthesia Educational Programs (COA). Over 800 APRNs and Nurse Scientists have graduated from the GSN since 1995, and the overall certification pass rate exceeds 99% with an impressive first time pass rate of over 95%.

Only students enrolled in branch-specific dental programs are eligible to apply.

The College of Allied Health Sciences was established in 2017 to grant degrees to qualified students of the Medical Education & Training Campus (METC). METC awards medical technician certificates to enlisted personnel; these classes count as major and elective credits required for a CAHS degree. General education credits are received in two ways: converting military training to academic credit, and transferring credits from other accredited universities. The role of CAHS is to collect information about all the credits students have earned at other universities, convert relevant military training to college credit, and incorporate METC training to grant accredited degrees to enlisted personnel. CAHS does not itself teach any classes.

CAHS is currently only offering an Associate of Science. A Bachelor of Science will be offered in the future.

USU is home to many different research Centers and Institutes, which help advance the university's education and public service missions.

Retrieved from "https://en.wikipedia.org/w/index.php?title=Uniformed_Services_University_of_the_Health_Sciences&oldid=968627982"
Categories:
Hidden categories:
The article is a derivative under the Creative Commons Attribution-ShareAlike License. A link to the original article can be found here and attribution parties here. By using this site, you agree to the Terms of Use. Gpedia Ⓡ is a registered trademark of the Cyberajah Pty Ltd.