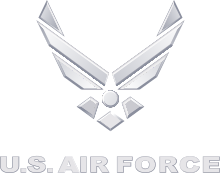 In the late 1990s, Air Force senior leadership recognized the need to design an official symbol and develop a centralized theme to encourage young people to join, encourage airmen to stay, and to build understanding, appreciation, and support for America's Air Force. They directed a commercial company, specializing in corporate branding, to research and develop a unique symbol. Company representatives traveled throughout the Air Force and to major U.S. cities to conduct research and become intimately familiar with the Air Force and its culture, environment, and heritage.

Retrieved from "https://en.wikipedia.org/w/index.php?title=United_States_Air_Force_Symbol&oldid=969066377"
Categories:
Hidden categories:
The article is a derivative under the Creative Commons Attribution-ShareAlike License. A link to the original article can be found here and attribution parties here. By using this site, you agree to the Terms of Use. Gpedia Ⓡ is a registered trademark of the Cyberajah Pty Ltd.