The U.S. Army enlisted rank insignia that was used during World War II differs from the current system. The color scheme used for the insignia's chevron design was defined as either light olive drab (shade number 3) on dark blue stripes for wear on the olive drab "winter" uniform or medium olive drab (shade number 2) on dark blue for wear on the khaki "summer" uniform.[citation needed] This scheme of rank insignia was established by War Department Circular No. 303 on 5 August 1920 and would see two significant changes in 1942. The usage of this style of insignia was ended by Department of the Army Circular No. 202, dated 7 July 1948, which provided for significant changes in both rank and insignia design. 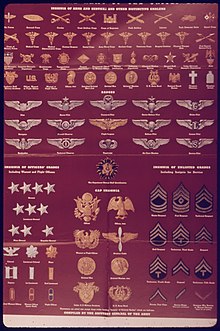 "Insignia of the Army of the United States", Office of War Information.

In 1920, the pay grade system was modified so the enlisted ranks were separated from the officer ranks. Previously, the bands of pay were numbered from 1 (general or admiral) to about 21 (private or apprentice seaman). Military budgets previously paid servicemen by trade rather than their rank, leading to 134 different trades with an array of insignia and no clear authority. Now, trades were grouped in seven "grades" of pay by rank. The "7th grade" (G7) indicated the lowest enlisted grade (i.e., private) and the "1st grade" (G1) signified the highest (i.e., master sergeant). Officers were paid in pay periods of 1st (second lieutenants and ensigns) through 8th (generals and admirals). Warrant officers' pay was still set by act of Congress, but their privileges, benefits, and pensions were equal to those of second lieutenants.

The "E" (enlisted scale), "W" (warrant officer scale), and "O" (officer scale) grade prefixes were not used until introduced by the Career Compensation Act of 1949. In 1951, the enlisted pay grades were reversed, with the "1st grade" being the lowest enlisted grade and the "7th grade" being the highest. The army rank of sergeant major was not restored until 1958, with the addition of the "super grades" of E8 (first sergeant and master sergeant) and E9 (sergeant major).

The rating (not rank) of specialist had the command responsibilities of either a private first class or private, but conveyed slightly higher pay depending on the specialty and skill. This additional pay, in addition to the number of specialists of the sixth and seventh grades in relation to the total number of enlisted men of these grades, was defined in the National Defense Act of 1920.

While the official insignia was a single chevron, it was not uncommon for local commanders to authorize local use of specialist insignia which consisted of one chevron and one to six rockers depending on the pay grade of the specialist (one rocker in the 6th grade, six rockers in the 1st grade). To indicate their specialty, a trade badge was sometimes inset between the chevron and the first rocker. These were often identical to the abandoned trade badges used before the reforms of 1920.[1]

The rank of technical sergeant was renamed sergeant first class in 1948. However, it still survives as an Air Force rank.

A technical sergeant was often designated a platoon sergeant, acting as second-in-command.

The ranks of specialist fifth class and specialist sixth class were also discontinued, and the men who ranked as such were paid according to their rank as privates first class or privates.[2] Initially, the technician ranks used the same insignia as staff sergeant, sergeant, and corporal, respectively, but on 4 September 1942, Change 1 to Army Regulation 600-35 added a "T" for "technician" underneath the standard chevron design that corresponded with that grade.[3] A technician was generally not addressed as such, but rather as the equivalent noncommissioned rank in its pay grade (T/5 as corporal; T/4 as sergeant; T/3 as sergeant or staff sergeant). Initially, technicians held the same authority as noncommissioned officers of their grade, but the Army declared in late 1943 amid a surplus of ranking noncommissioned officers in certain units originating from this policy that only technicians who were appointed prior to 1 December 1943 would continue to keep the authority of their respective grades; men appointed after would still draw the pay of their equivalent noncommissioned officer rank, but would only have the authority of privates.[4]

The technician ranks were removed from the rank system in 1948. The concept was brought back with specialist ranks in 1955.

On September 22, 1942, in Change 3 to Army Regulation 600-35, the rank of first sergeant was increased from the 2nd grade to the 1st grade in pay. The insignia was changed to add a third rocker to match the other 1st grade rank, master sergeant.[3]

As seen in the comparative chart below, the U.S. Army ranks during World War II were not abbreviated the same as they currently are today having all letters capitalized. Rather, only the first letter was capitalized, followed by the rest of the abbreviated word in the lower case, and a period to indicate it as being an abbreviation. In some cases, two or more letters were capitalized with a slash mark after the first letter to indicate that there was more than one word in the full title of the rank. See the comparative chart below.

Some ranks are not included in the chart for a proper comparison.

Retrieved from "https://en.wikipedia.org/w/index.php?title=United_States_Army_enlisted_rank_insignia_of_World_War_II&oldid=979660831"
Categories:
Hidden categories:
The article is a derivative under the Creative Commons Attribution-ShareAlike License. A link to the original article can be found here and attribution parties here. By using this site, you agree to the Terms of Use. Gpedia Ⓡ is a registered trademark of the Cyberajah Pty Ltd.