Jump to navigation Jump to search
Government buildings of the US 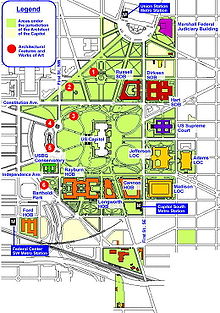 While the Capitol is the central feature of the complex, other parts of the Capitol Complex include the:

In addition to the buildings listed above, several monuments, sculptures, and other works of art are located in and around the Capitol Complex. These include the National Statuary Hall Collection and the Statue of Freedom among many others.

The westernmost part of the grounds is the Capitol Reflecting Pool, which reflects the Capitol and the Ulysses S. Grant Memorial.

Daguerreotype of the Capitol, c. 1846

Construction of the Capitol began in 1793. When built, it was the only existing building for the use by the nation's legislature. In addition to Congress, the building was also designed to house the Library of Congress, the Supreme Court, the district courts, and other offices.

Following the completion of the building and as the nation grew, so did the size of the Congress. The Capitol and its grounds were enlarged accordingly, and by 1892 the building had reached essentially its present size and appearance (with the exception of the east front extension 1958–1962 and courtyard infill areas 1991–1993).

Even with the enlargements, Congress eventually grew too big for the building and new facilities had to be constructed to meet the needs of the government. With the moving of the Library of Congress into its own building in 1897, and with the construction of new office buildings for the House and Senate in the early 20th century, the Capitol Complex was born.

The 1930s was a decade of major construction within the growing Capitol Complex. In 1933 alone the U.S. Botanic Garden Conservatory, Director's residence, and Bartholdi Park were completed; the Senate Office Building's First Street wing, which had been omitted during construction for funding reasons, was added; and the Additional House Office Building (later named the Longworth House Office Building) was occupied. The Supreme Court at last found a permanent home when its own building was completed in 1935. The last building constructed within the complex in this decade was the Library of Congress Annex, now named the John Adams Building, which opened in 1939.

Within twenty years, attention returned to the need for more Congressional office space; this led to the construction of a second building for the Senate (now named the Dirksen Senate Office Building), which was completed in 1958. The House's third building, the Rayburn House Office Building, opened in 1965.

Capitol Complex (in foreground, 2007) looking west toward the National Mall

In the 1970s, two more buildings became available for the House: the former Congressional Hotel, the O'Neill House Office Building (demolished in 2002), and a larger building originally constructed for the Federal Bureau of Investigation (now the Ford House Office Building). A third building for the Library of Congress, the James Madison Memorial Building, opened in 1980 and the Senate's third building, the Hart Senate Office Building, was occupied in 1982. The most recent large structure within the Capitol complex is the Thurgood Marshall Federal Judiciary Building, which was opened in 1992.

Renovations to the Botanic Garden Conservatory began in September 1997 and continued for four years until December 2001 when the building reopened. The Conservatory's aluminum framework, glazing, interior floors, doors, and lighting were replaced; all electrical, plumbing, and environmental control systems were upgraded, and air conditioning was added to the display halls.

The newest addition to the Capitol Complex is the Capitol Visitor Center. Despite many delays, the Center opened in December 2008, and includes an exhibition gallery, two theaters, a dining facility, and gift shops. The budget for construction of the Center was $584 million.

On January 6, 2021, the Capitol was stormed by supporters of President Trump after a rally in front of The White House. A Capitol Police Officer was wounded and was pronounced dead a day later at a nearby hospital. Additionally, one of the insurrectionists was shot and later pronounced dead at a nearby hospital. A further three deaths from medical emergencies were reported while dozens of injuries were reported by Capitol Police.

Some text from this article came from the public domain webpages of the Architect of the Capitol:

Retrieved from "https://en.wikipedia.org/w/index.php?title=United_States_Capitol_Complex&oldid=999763315"
Categories:
Hidden categories:
The article is a derivative under the Creative Commons Attribution-ShareAlike License. A link to the original article can be found here and attribution parties here. By using this site, you agree to the Terms of Use. Gpedia Ⓡ is a registered trademark of the Cyberajah Pty Ltd.