Created in 1876 in honor of the United States turning 100 years old, the Capitol Guide Service was subject to the direction, supervision, and control of a Capitol Guide Board consisting of the Architect of the Capitol, the Sergeant at Arms of the Senate, and the Sergeant at Arms of the House of Representatives. These same three officials also made up the Capitol Police Board. Key Guide Service personnel included the Director, four Assistant Directors, as well as many regular guides.

Personnel of the Capitol Guide Service could also be transferred to the United States Capitol Police force at the discretion of the Capitol Guide Board to provide ushering and informational services, and other services not directly involving law enforcement. This sometimes happened during major events, such as presidential inaugurations and Lying in State ceremonies. 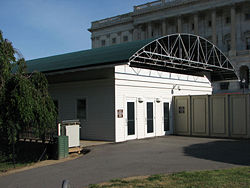 The Capitol Guides operated out of facilities located on the south side of the United States Capitol. Visitors were processed through the South Visitor Facility which included security screening and then directed into the Capitol, itself, via a walk around the west front of the building to enter through a west terrace door. Behind the South Visitor Facility was a trailer, which served as the temporary rest area and locker facility for the guides. Upon the opening of the Capitol Visitor Center (CVC) on December 2, 2008, both buildings were removed and all guide-related operations as well as the guides themselves were transferred to the jurisdiction and oversight of the Architect of the Capitol, specifically the Visitor Services Division of the Capitol Visitor Center.

Retrieved from "https://en.wikipedia.org/w/index.php?title=United_States_Capitol_Guide_Service&oldid=912427976"
Categories:
Hidden categories:
The article is a derivative under the Creative Commons Attribution-ShareAlike License. A link to the original article can be found here and attribution parties here. By using this site, you agree to the Terms of Use. Gpedia Ⓡ is a registered trademark of the Cyberajah Pty Ltd.