Jump to navigation Jump to search
Not to be confused with Center for Immigration Studies.

USCIS performs many of the duties of the former INS, namely processing and adjudicating various immigration matters, including applications for work visas, asylum, and citizenship. Additionally, the agency is officially tasked with safeguarding national security, eliminating immigration case backlogs, and improving efficiency. USCIS is currently headed by an Acting Director, Mark Koumans, after the appointment of his predecessor Ken Cuccinelli was found to be unlawful.[4][5] 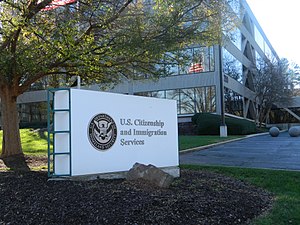 USCIS is charged with processing immigrant visa petitions, naturalization applications, asylum applications, applications for adjustment of status (green cards), and refugee applications. It also makes adjudicative decisions performed at the service centers, and manages all other immigration benefits functions (i.e., not immigration enforcement) performed by the former INS. Other responsibilities of the USCIS include:

While core immigration benefits functions remain the same as under the INS, a new goal is to process immigrants' applications more efficiently. Improvement efforts have included attempts to reduce the applicant backlog, as well as providing customer service through different channels, including the USCIS Contact Center with information in English and Spanish, Application Support Centers (ASCs), the Internet and other channels. The enforcement of immigration laws remains under Customs and Border Protection (CBP) and Immigration and Customs Enforcement (ICE).

USCIS focuses on two key points on the immigrant's journey towards civic integration: when they first become permanent residents and when they are ready to begin the formal naturalization process. A lawful permanent resident is eligible to become a citizen of the United States after holding the Permanent Resident Card for at least five continuous years, with no trips out of the United States lasting 180 days or more. If, however, the lawful permanent resident marries a U.S. citizen, eligibility for U.S. citizenship is shortened to three years so long as the resident has been living with the spouse continuously for at least three years and the spouse has been a resident for at least three years.

USCIS handles all forms and processing materials related to immigration and naturalization. This is evident from USCIS' predecessor, the INS, (Immigration and Naturalization Service) which is defunct as of March 1, 2003.[6][circular reference]

The redesign made the web page interface more like the Department of Homeland Security's official website. The last major redesign before 2009 took place in October 2006.

Also, USCIS runs an online appointment scheduling service known as INFOPASS. This system allows people with questions about immigration to come into their local USCIS office and speak directly with a government employee about their cases. As of early 2019, however, many USCIS field offices are doing away with on-demand INFOPASS appointments.[citation needed]

Unlike most other federal agencies, USCIS is funded almost entirely by user fees.[9] Under President George W. Bush's FY2008 budget request, direct congressional appropriations made about 1% of the USCIS budget and about 99% of the budget was funded through fees. The total USCIS FY2008 budget was projected to be $2.6 billion.[10][needs update]

USCIS consists of approximately 19,000 federal employees and contractors working at 223 offices around the world.[11]

USCIS's mission statement was changed on February 23, 2018. Among other changes, the phrase "America's promise as a nation of immigrants" was eliminated, a move that drew criticism from immigration rights advocates and praise from those in favor of tighter restrictions on immigration.[12]

This article incorporates public domain material from websites or documents of the United States Department of Homeland Security.

Retrieved from "https://en.wikipedia.org/w/index.php?title=United_States_Citizenship_and_Immigration_Services&oldid=952616063"
Categories:
Hidden categories:
The article is a derivative under the Creative Commons Attribution-ShareAlike License. A link to the original article can be found here and attribution parties here. By using this site, you agree to the Terms of Use. Gpedia Ⓡ is a registered trademark of the Cyberajah Pty Ltd.