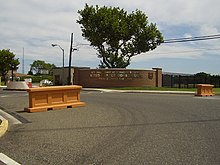 United States Coast Guard Training Center Cape May (TRACENCM) is the home of the Coast Guard enlisted corps and is the Coast Guard's only enlisted accession point and recruit training center, located on 1 Munro Avenue, Cape May, New Jersey.

History of the training center

Sewell Point, the area occupied by the Training Center, has a long history of naval presence. During the American Revolutionary War and throughout the nineteenth century, Cape May Sound was used as a harbor of refuge. In 1917, the Navy established a "section base" in Cape May to provide training, vessel support and communication facilities for coastal defense. Initially, the Navy converted an abandoned amusement center, built along the oceanfront, for military use. The old skating rink became the mess hall and sleeping quarters, the stage was made into a galley, the "human roulette wheel" – a scrub table and the "barrel of fun" became a brig. When the old wooden structure burned down in 1918, the Navy built standard military facilities along the harbor front (some of these buildings still stand).

After World War I, the base was adapted to accommodate dirigibles. The largest hangar in the world, 700 feet long and over 100 feet tall, was built to accommodate an airship under construction in Britain. However, the R38 (ZR-2) crashed on its test flight and "lighter-than-air" craft were never fully adopted for Navy use.

In 1924, the U.S. Coast Guard occupied the base and established air facilities for planes used in support of United States Customs Service efforts. During the Prohibition era, several cutters were assigned to Cape May to foil rumrunners operating off the New Jersey coast. After Prohibition, the Coast Guard all but abandoned Cape May leaving a small air/sea rescue contingent. For a short period of time (1929–1934), part of the base was used as a civilian airport. With the advent of World War II, a larger airstrip was constructed and the Navy returned to train aircraft carrier pilots. The over the water approach simulated carrier landings at sea. The Coast Guard also increased its Cape May forces for coastal patrol, anti-submarine warfare, air/sea rescue and buoy service. In 1946, the Navy relinquished the base to the Coast Guard.

In 1948, all entry level training on the east coast was moved to the U.S. Coast Guard Recruit Receiving Station in Cape May. The Coast Guard consolidated all recruit training functions in Cape May in 1982.

Although modern training facilities have replaced most of the original Naval Base buildings, the Coast Guard is respectful of the history of Sewell Point and their host city.[citation needed]

A Company Commander marches his company of trainees at Cape May

In addition to its role as the sole accession point for the Coast Guard’s enlisted corps, TRACENCM contains the Coast Guard's recruiter and company commander (i.e. "drill instructor") programs.

The TRACEN maintains its own active duty and reservist staffed military fire and police departments, as well as ambulance service, that are frequently called for mutual aid in the local areas.

Locally, there is a robust United States Coast Guard Auxiliary presence that plays an integral part in many aspects of maritime, navigational and maritime life in the greater Training Center community.[citation needed]

Delaware Military Academy has their Basic Leadership Training at the center.

Recognizing the enduring relationship between the greater Cape May region, on the evening of Friday, 8 May 2015, the Commandant of the Coast Guard, Admiral Paul F. Zukunft, proclaimed Cape May County a “Coast Guard Community”, one of 17 in the nation.[1]

Retrieved from "https://en.wikipedia.org/w/index.php?title=United_States_Coast_Guard_Training_Center_Cape_May&oldid=938954895"
Categories:
Hidden categories:
The article is a derivative under the Creative Commons Attribution-ShareAlike License. A link to the original article can be found here and attribution parties here. By using this site, you agree to the Terms of Use. Gpedia Ⓡ is a registered trademark of the Cyberajah Pty Ltd.