All Coast Guard officers are line officers, unlike the Navy, which has a staff corps to identify certain career fields.

The United States Coast Guard Auxiliary is the uniformed auxiliary service of the Coast Guard. The unit does not use the Coast Guard rank system, but uses modified Coast Guard officer rank insignia to signify a member's position within the organization. For example, a Flotilla Commander wears insignia similar to a Lieutenant. 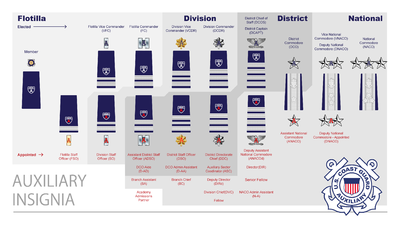 USCG Auxiliary officers wear silver braid insignia (referred to as "office insignia") instead of gold; with a "hollow" USCG shield above containing the letters "USCG" superimposed above a red "A" (to signify an appointed officer") or silver "A" (to signify an elected officer). Metal and sew-on insignia are identical to Coast Guard officer insignia, except that a red, blue, or black "A" is superimposed.

Auxiliarists generally do not use titles in direct address, with the exception of a few very senior leaders who are addressed as "Commodore."

Retrieved from "https://en.wikipedia.org/w/index.php?title=United_States_Coast_Guard_officer_rank_insignia&oldid=914611469"
Categories:
The article is a derivative under the Creative Commons Attribution-ShareAlike License. A link to the original article can be found here and attribution parties here. By using this site, you agree to the Terms of Use. Gpedia Ⓡ is a registered trademark of the Cyberajah Pty Ltd.