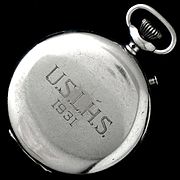 In 1910, 11,713 aids to navigation of all types were around the country. Congress abolished the U.S. Light-House Board and created the Bureau of Lighthouses under the Department of Commerce.

The Board had hired a number of civilians and many of these experienced people took over the roles that the military officers had been playing. Though initially called inspectors, the civilian heads of the districts changed their titles to superintendent. Also at this time, the placement of aids to navigation along rivers had become the responsibility of the Lighthouse Service, and many of these aids were tended on a part-time basis by local citizens called lamp lighters and lamp attendants.

President William Taft selected George R. Putnam to head the new bureau and he gained the title "Commissioner of Lighthouses." For 25 years, Putnam headed the bureau and during his administration, navigational aids saw a substantial increase. New technology was incorporated into the bureau's work, particularly in the area of electric aids and some automation using electricity. Though the number of aids to navigation increased substantially during Putnam's reign from 11,713 to 24,000, mostly buoys and small lights, arguably two of his most significant achievements were the passage of the Retirement Act for lighthouse personnel in 1918 and the introduction in 1921 of the radiobeacon as an aid to navigation. This new technology permitted a reduction of over 800 employees during Putnam's 25 years as head of the bureau.

During World War I and the period following, several technological advances contributed to the automation of lighthouses, rendering human occupancy unnecessary. A device for automatically replacing burned-out electric lamps in lighthouses was developed and placed in several light stations in 1916. A bell alarm warning keepers of fluctuations in the burning efficiency of oil-vapor lamps was developed in 1917. In the same year, the first experimental radiobeacon was installed in a lighthouse. The only lightvessel of the service sunk by enemy action was the LV-71 on August 6, 1918. After the sinking of the SS Merak by the German submarine U-104 near Diamond Shoals, North Carolina LV-71 rescued the survivors but was sunk as well shortly thereafter. Nobody was hurt in the action because the German commander allowed the Americans to evacuate the ship before firing.[2][3]

The first automatic radiobeacon in the United States began service in 1928. Radiobeacons are still in use today, although most have recently been decommissioned as improved electronic navigational aids have become available. An automatic time clock for operating electric range lights came into use in 1926, and by 1933, a photo electric-controlled alarm device had been developed to check the operation of the unwatched electric light. A lightship staffed by remote control was equipped by the Lighthouse Bureau in 1934. It included a light, fog signal, and radiobeacon, all controlled by radio signals. A battery-powered buoy which gradually replaced the older acetylene buoys, was introduced in 1935. Because of the technological improvements mentioned above, and in particular the radiobeacon direction finder, the United States rose from sixth in shipping safety in 1920 to second in 1935, with only the Netherlands holding a better safety record.

Improvements in the road and highway systems provided better and more rapid means of transportation during the 1920s and 1930s. As a result of the improved roadways, the Bureau was able to better maintain aids to navigation, benefiting the service economically. The extension of electric lines into remote sections of the country provided a reliable power source for operating aids to navigation. By the 1920s and 1930s, the majority of light stations had electric service, reducing the number of staff necessary to operate the station. As ancillary buildings at many stations, especially shore stations, were rendered useless, the makeup of the light station began to change.

In 1935, Putnam was followed in the Commissioner's position by a career Lighthouse Service employee, H. D. King, a former district superintendent.
On 1 July 1939, the Service merged with the United States Coast Guard, which has since taken over the maintenance and operation of all U.S. lighthouses and lightships.

Rank insignia of officers were as follows in 1918:

This article incorporates public domain material from websites or documents of the United States Government.

Retrieved from "https://en.wikipedia.org/w/index.php?title=United_States_Lighthouse_Service&oldid=946696495"
Categories:
Hidden categories:
The article is a derivative under the Creative Commons Attribution-ShareAlike License. A link to the original article can be found here and attribution parties here. By using this site, you agree to the Terms of Use. Gpedia Ⓡ is a registered trademark of the Cyberajah Pty Ltd.