The Seal of the USNO with a quote from the Astronomica A.K.A. the Astronomicon, Adde gubernandi studium: Pervenit in astra, et pontum caelo conjunxit, "Increase the study of navigation: it arrives in the stars, and marries the sea with heaven"

The United States Naval Observatory (USNO) is one of the oldest scientific agencies in the United States, with a primary mission[1] to produce Positioning, Navigation and Timing (PNT)[2] for the United States Navy and the United States Department of Defense. Located in Northwest Washington, D.C. at the Northwestern end of Embassy Row, it is one of the pre-1900 astronomical observatories located in an urban area; at the time of its construction, it was far from the light pollution thrown off by the (then-smaller) city center. Former USNO director Gernot M. R. Winkler initiated the "Master Clock" service that the USNO still operates,[3] and which provides precise time to the GPS satellite constellation run by the United States Air Force. The USNO performs radio VLBI-based positions of quasars with numerous global collaborators, in order to produce Earth Orientation parameters.

Aside from its scientific mission, a house located within the Naval Observatory complex serves as the official residence of the Vice President of the United States. 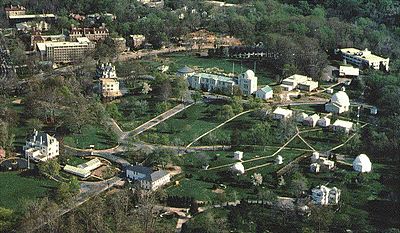 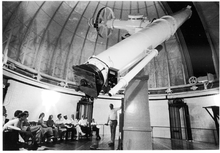 The 26-inch (66 cm) aperture telescope, which Asaph Hall discovered the Moons of Mars with in 1877, shown here at its new location

President John Quincy Adams, who in 1825 signed the bill for the creation of a national observatory just before leaving presidential office, had intended for it to be called the National Observatory.[4] The names "National Observatory" and "Naval Observatory" were both used for 10 years, until a ruling was passed to officially use the latter.[5] Adams had made protracted efforts to bring astronomy to a national level at that time.[6][7] He spent many nights at the observatory, watching and charting the stars, which had always been one of Adams' avocations.

Established by the order of the United States Secretary of the Navy John Branch on 6 December 1830 as the Depot of Charts and Instruments,[8] the Observatory rose from humble beginnings. Placed under the command of Lieutenant Louis M. Goldsborough, with an annual budget of $330, its primary function was the restoration, repair, and rating of navigational instruments. It was made into a national observatory in 1842 via a federal law and a Congressional appropriation of $25,000. Lieutenant James Melville Gilliss was put in charge of "obtaining the instruments needed and books."[9] Lt. Gilliss visited the principal observatories of Europe with the mission to purchase telescopes and scientific devices and books.[10]

The observatory's primary mission was to care for the United States Navy's marine chronometers, charts, and other navigational equipment. It calibrated ships' chronometers by timing the transit of stars across the meridian. Opened in 1844 in Foggy Bottom north of the present site of the Lincoln Memorial and west of the White House (see: Old Naval Observatory), the observatory moved in 1893 to its present location[11] on a 2000-foot circle of land atop Observatory Hill overlooking Massachusetts Avenue. These facilities were listed on the National Register of Historic Places in 2017.[12]

The first superintendent was Navy Commander Matthew Fontaine Maury. Maury had the world's first vulcanized time ball, created to his specifications by Charles Goodyear for the U.S. Observatory. It was the first time ball in the United States, being placed into service in 1845, and the 12th in the world. Maury kept accurate time by the stars and planets. The time ball was dropped every day except Sunday precisely at the astronomically defined moment of Mean Solar Noon, enabling all ships and civilians to know the exact time. By the end of the American Civil War, the Observatory's clocks were linked via telegraph to ring the alarm bells in all of the Washington, D.C. firehouses three times a day, and by the early 1870s the Observatory's daily noon-time signal was being distributed nationwide via the Western Union Telegraph Company. Time was also "sold"[citation needed] to the railroads and was used in conjunction with railroad chronometers to schedule American rail transport. Early in the 20th century, the Arlington Time Signal broadcast this service to wireless receivers.

In 1849 the Nautical Almanac Office (NAO) was established in Cambridge, Massachusetts as a separate organization. It was moved to Washington, D.C. in 1866, colocating with the U. S. Naval Observatory in 1893. On September 20, 1894, the NAO became a "branch" of USNO, however it remained autonomous for several years after this.[13]

An early scientific duty assigned to the Observatory was the U.S. contribution to the definition of the Astronomical Unit, or the AU, which defines a standard mean distance between the Sun and the Earth, conducted under the auspices of the Congressionally funded U.S. Transit of Venus Commission. The astronomical measurements taken of the transit of Venus by a number of countries since 1639 resulted in a progressively more accurate definition of the AU. Relying heavily on photographic methods, the naval observers returned 350 photographic plates in 1874, and 1,380 measurable plates in 1882. The results of the surveys conducted simultaneously from several locations around the world (for each of the two transits) produced a final value of the solar parallax, after adjustments, of 8.809", with a probable error of 0.0059", yielding a U.S. defined Earth-Sun distance of 92,797,000 miles (149,342,000 km), with a probable error of 59,700 miles (96,100 km). This calculated distance was a significant improvement over several previous estimates.[14]

The telescope used for the discovery of the Moons of Mars was the 26-inch (66 cm) refractor (a telescope with a lens), then located at Foggy Bottom.[15] In 1893 it was moved to the present location.[16]

In November 1913 the Paris Observatory, using the Eiffel Tower as an antenna, exchanged sustained wireless (radio) signals with the United States Naval Observatory, using an antenna in Arlington, Virginia to determine the exact difference of longitude between the two institutions.[17]

In 1934, the last (then) large telescope to be installed at USNO saw "first light". This 40-inch aperture instrument[18] was also the second (and final) telescope made by famed optician, George Willis Ritchey. The Ritchey–Chrétien telescope design has since become the de facto optical design for nearly all major telescopes, including the famed Keck telescopes and the spaceborne Hubble Space Telescope. Unfortunately, light pollution forced USNO to relocate the 40-inch telescope to Flagstaff, Arizona. There it began operations of a new Navy command, now called the Naval Observatory Flagstaff Station (NOFS). Those operations commenced in 1955,[19] and within a decade, the Navy's largest telescope, the 61-inch "Kaj Strand Astrometric Reflector" was built, seeing light at NOFS in 1964.[20]

The United States Naval Observatory no longer obtains significant astrometric observations, but it continues to be a major authority in the areas of Precise Time and Time Interval, Earth orientation, astrometry and celestial observation. In collaboration with many national and international scientific establishments, it determines the timing and astronomical data required for accurate navigation, astrometry, and fundamental astronomy and calculation methods — and distributes this information (such as star catalogs)[21] in the Astronomical Almanac, The Nautical Almanac, and on-line.[22]

Perhaps it is best known to the general public for its highly accurate ensemble of atomic clocks and its year 2000 time ball replacement.[23] The site also houses the largest astronomy library in the United States (and the largest astrophysical periodicals collection in the world).[24] The library includes a large collection of rare, often famous, physics and astronomy books from across the past millennium.

Official residence of the Vice President of the United States

Since 1974, a house situated in the grounds of the observatory, at Number One Observatory Circle, has been the official residence of the Vice President of the United States. The house is separated from the Naval Observatory, and was formerly the residence of its superintendent, and later the home of the Chief of Naval Operations.[27] The Observatory is therefore subject to tight security control enforced by the Secret Service.

According to a 15 May 2009 blog posting by Newsweek's Eleanor Clift,[28] Vice President Joe Biden revealed the existence of what Clift described as a bunker-like room in the residence. The bunker is the secure, undisclosed location where former Vice President Dick Cheney remained under protection in secret after the September 11 attacks: according to Clift's report, titled "Shining Light on Cheney's Hideaway":

Biden said a young naval officer giving him a tour of the residence showed him the hideaway, which is behind a massive steel door secured by an elaborate lock with a narrow connecting hallway lined with shelves filled with communications equipment.

Biden's press office subsequently issued a statement denying the bunker report, suggesting that Biden had instead been describing "an upstairs workspace".[29]

The U.S. Naval Observatory operates two Master Clock facilities. The primary facility, in Washington, D.C. maintains 57 HP/Agilent/Symmetricom 5071A-001 high performance cesium atomic clocks and 24 hydrogen masers. The alternate master clock, at Schriever Air Force Base, maintains 12 cesium clocks and 3 masers.[30] The observatory also operates four[31] rubidium atomic fountain clocks, which have a stability reaching 7×10−16.[32] The observatory intends to build several more of this type for use at its two facilities.[30] The clocks used for the USNO timescale are kept in 19 environmental chambers, whose temperatures are kept constant to within 0.1 degree C and whose relative humidities (for all masers and most cesiums) are kept constant to within 1%. The timescale is based only upon the Washington DC clocks. On June 7, 2007, 70 standards were weighted in the timescale computations.[30]

The U.S. Naval Observatory provides public time service via 26[30] NTP servers on the public Internet,[33] and via telephone voice announcements:[34]

The USNO also operates a modem time service,[38] and provides time to the Global Positioning System.

The United States Naval Observatory Instrument shop has been manufacturing precise instrumentation since the early 1900s.[39]

Retrieved from "https://en.wikipedia.org/w/index.php?title=United_States_Naval_Observatory&oldid=977806568"
Categories:
Hidden categories:
The article is a derivative under the Creative Commons Attribution-ShareAlike License. A link to the original article can be found here and attribution parties here. By using this site, you agree to the Terms of Use. Gpedia Ⓡ is a registered trademark of the Cyberajah Pty Ltd.