Jump to navigation Jump to search
Unified combatant command of the United States Armed Forces responsible for the North American region
This article is about a Unified Combatant Command of the U.S. Armed Forces. For the Chinese tower manufacturing and wireless broadband company, see Northcom Group. 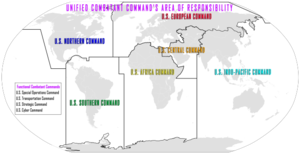 NORTHCOM Area of Responsibility (in blue)

United States Northern Command (USNORTHCOM)[3] is one of eleven unified combatant commands of the United States Department of Defense. The command is tasked with providing military support for non-military authorities in the U.S., and protecting the territory and national interests of the United States within the continental United States, Puerto Rico, Canada, Mexico, The Bahamas, and the air, land and sea approaches to these areas. It is the U.S. military command which, if applicable, would be the primary defender against an invasion of the U.S.

According to the UCP, Northern Command's mission is to:[7]

USNORTHCOM's Area of Responsibility (AOR) includes air, land and sea approaches and encompasses the continental United States, Canada, Mexico and the surrounding water out to approximately 500 nautical miles (930 km). It also includes the Gulf of Mexico, the Straits of Florida, portions of the Caribbean region to include The Bahamas, Puerto Rico, the U.S. Virgin Islands, the British Virgin Islands, Bermuda, and the Turks and Caicos Islands.[8] The commander of USNORTHCOM is responsible for theater security cooperation with Canada, Mexico, and The Bahamas.[9] In May 2011, NORTHCOM was mobilized in the wake of the BP oil spill in the Gulf of Mexico[10] to provide air, ground, and logistical support.[11] In October 2014, NORTHCOM took administrative control of Alaskan Command.[12]

USNORTHCOM headquarters has approximately 1,200 uniformed and civilian staff.[15] In its first period of organising in 2002–03, one priority was to hire civilian staff which could help respond to a Weapons of Mass Destruction attack and to coordinate disaster recovery.[16]

Note: The National Defense Authorization Act of 2008 stipulates that at least one deputy commander of USNORTHCOM be a National Guard general officer unless the commander is already such an officer.[19][20]

Commanders of U.S. Northern Command by branches of service

Northern Command has created several classified "concept plans" (e.g. "Defense Support of Civil Authorities") that are intended to address the 15 National Planning Scenarios that NORTHCOM must be prepared to respond to.[21]

However the GAO found that the national strategy to defend the United States is several years out of date.[22]

In Exercise Vigilant Shield 2008, Northern Command, Pacific Command, the Department of Homeland Security, and numerous law enforcement agencies across the U.S. conducted exercises to test their "response abilities against a variety of potential threats".[25]

The Posse Comitatus Act of 1878 and subsequent Department of Defense policy constrains any member of the United States Army, Air Force, Navy, or Marine Corps, and the National Guard under federal authority from domestically intervening in a law enforcement capacity on United States soil. Several exceptions to the law have been used in the past, including protecting the citizens' constitutional rights in the absence of state and/or local assistance, such as protecting the Little Rock Nine students in Little Rock, Arkansas in 1957, and using the Insurrection Act to quell civil disorders, such as the 1992 Los Angeles riots.

The Military Commissions Act of 2006 lifted many restrictions placed on the military to support non-military authorities by the Posse Comitatus Act, however the United States Supreme Court ruled in June 2008 that significant portions of the MCA were unconstitutional. The "John Warner Defense Authorization Act of 2007" H.R. 5122 (2006) effectively nullified the limits of the Insurrection Act[26] when it was passed; however, the bill was amended in 2008.

On 1 October 2008, the 3rd Infantry Division's 1st Brigade Combat Team was assigned to U.S. Northern Command, marking the first time an active unit had been given a dedicated assignment to Northern Command. The force will be known for the first year as a CBRNE Consequence Management Response Force, and will serve as an on-call federal response force for terrorist attacks and other natural or manmade emergencies and disasters.[27]

Retrieved from "https://en.wikipedia.org/w/index.php?title=United_States_Northern_Command&oldid=980983768"
Categories:
Hidden categories:
The article is a derivative under the Creative Commons Attribution-ShareAlike License. A link to the original article can be found here and attribution parties here. By using this site, you agree to the Terms of Use. Gpedia Ⓡ is a registered trademark of the Cyberajah Pty Ltd.