The United States Postal Inspection Service (USPIS) or the Postal Inspectors, is the law enforcement arm of the United States Postal Service. Its jurisdiction is defined as "crimes that may adversely affect or fraudulently use the U.S. Mail, the postal system or postal employees." The mission of the U.S. Postal Inspection Service is to support and protect the U.S. Postal Service, its employees, infrastructure, and customers by enforcing the laws that defend the nation's mail system from illegal or dangerous use.

The Postal Inspection Service has the oldest origins of any federal law enforcement agency in the United States. It traces its roots back to 1772[3] when colonial Postmaster General Benjamin Franklin first appointed a "surveyor" to regulate and audit the mails. Thus, the Service's origins—in part—predate the Declaration of Independence, and therefore the United States itself.

As Franklin was appointed Postmaster General under the Second Continental Congress, his system continued. One of Franklin's first acts as Postmaster General was to appoint William Goddard as the first Postal Surveyor of the newly founded American postal system, in charge of inspecting the integrity and security of postal routes, regulating post offices, and auditing their accounts. A letter from Franklin to Goddard, dated August 7, 1775, authorized a total of $170.00 for Goddard to carry out these duties,[4] and so August 7 is recognized as the "birthday" of the U.S. Postal Inspection Service.

In 1801, the title of "surveyor" was changed to Special Agent. In 1830, the Special Agents were organized into the Office of Instructions and Mail Depredations. The Postal Inspection Service was the first federal law enforcement agency to use the title Special Agent for its officers. Congress changed this title to Inspector in 1880.

For some time, one of their primary duties was the enforcement of obscenity prohibitions under the Comstock Act, named after Postal Inspector Anthony Comstock.

The USPIS has responsibility to safeguard over 600,000[5] Postal Service employees and billions of pieces of mail transported worldwide yearly by air, land, rail, and sea.

USPIS was at one time the only investigative agency of the Postal Service; however, with the creation of the USPS Office of Inspector General in 1996, they assumed many duties previously carried out by the USPIS. The USPS OIG conducts independent audits and investigations. Audits of postal programs and operations help to determine whether the programs and operations are efficient and cost-effective. Investigations help prevent and detect fraud, waste, and misconduct and have a deterrent effect on postal crimes.

The OIG primarily took over the Postal Inspection Service's audit function, as well as fraud (against the USPS) waste and abuse. 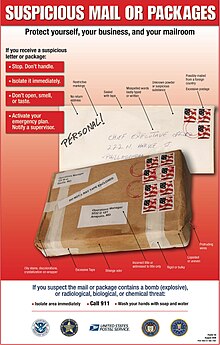 Since the September 11, 2001, attacks, the USPIS has also investigated several cases where ricin, anthrax, and other toxic substances were sent through the mail. Although the USPIS has a wide jurisdiction, USPIS investigations can be categorized into these seven types of investigative teams and functions:

The U.S. Postal Inspection Service first established a crime lab in 1940.[11] Today, the main USPS Forensic Laboratory is located in Dulles, Virginia,[12] in a two-story, 44,000-square-foot facility.[13] The lab is staffed by forensic scientists and technical experts and consists of four units: the Questioned Documents Unit, the Fingerprint Unit, the Physical Sciences Unit, and the Digital Evidence Unit.[12] The laboratory is overseen by a laboratory director and each of the four units is overseen by an assistant laboratory director.[13] There are also four satellite offices, located in New York, Chicago, Memphis, and San Francisco.[14] In 2012, the entire U.S. Postal Inspection Service laboratory system had 65 employees (58 scientific staff and seven administrative staff), mostly based in the main Dulles lab.[13]

In addition to maintaining a staff of postal inspectors, the Postal Inspection Service has a uniformed force of Postal Police Officers who provide security service at major postal facilities throughout the United States, conduct perimeter security, escort high-value mail shipments, and perform other essential security functions. As of 2018 there were approximately 500 postal police officers nationwide.

Fourteen US Postal Inspectors and Postal Police Officers have died in the line of duty.[16] Their names have been etched on the National Law Enforcement Officers Memorial wall and to a Postal Inspection Service plaque at the agency's national headquarters, both located in Washington, D.C.

In 2006 the Postal Inspection Service created the "2 SMRT 4U" campaign aimed at teenage girls, the group most targeted by online sexual predators. It established the website to educate teens about how to chat and post wisely online.[17] The website has been rebranded NSTeens.org, but still provides educational information for teens. For its dedication to protecting children and fighting child exploitation, the United States Department of Justice honored the Postal Inspection Service with its Internet Safety Award.[18]

Retrieved from "https://en.wikipedia.org/w/index.php?title=United_States_Postal_Inspection_Service&oldid=972489316"
Categories:
Hidden categories:
The article is a derivative under the Creative Commons Attribution-ShareAlike License. A link to the original article can be found here and attribution parties here. By using this site, you agree to the Terms of Use. Gpedia Ⓡ is a registered trademark of the Cyberajah Pty Ltd.