Along with the NOAA Commissioned Officer Corps, the Public Health Service Commissioned Corps is one of two uniformed services that consist only of commissioned officers and has no enlisted or warrant officer ranks, although warrant officers have been authorized for use within the service.[12] Officers of the PHSCC are classified as noncombatants, unless directed to serve as and part of the military by the President or detailed to a service branch of the military.[13] Members of the PHSCC wear the same uniforms as the United States Navy, or the United States Coast Guard (when assigned to the Coast Guard), with special PHS Commissioned Corps insignia, and hold naval ranks equivalent to officers of the U.S. Navy and U.S. Coast Guard. The PHSCC's officers typically receive their commissions through the PHS Commissioned Corps's direct commissioning program.

As with its parent division, the Public Health Service, the Commissioned Corps is under the direction of the United States Department of Health and Human Services. The PHSCC is led by the Surgeon General, who holds the grade of vice admiral.[14] The Surgeon General reports directly to the Department of Health and Human Services, Assistant Secretary for Health; the Assistant Secretary of Health may be appointed to the rank of admiral if he or she is also a serving uniformed officer of the PHSCC.[14]

John Maynard Woodworth, a famous surgeon of the Union Army who served under General William Tecumseh Sherman, was appointed in 1871 as the Supervising Surgeon. Woodworth's title was later changed to "Supervising Surgeon General," which later became the Surgeon General of the United States. Woodworth is credited with the formal creation of the Commissioned Corps. Woodworth organized the Marine Hospital Service medical personnel along Army military structure in 1889 to facilitate a mobile force of health professionals that could be moved for the needs of the service and country. He established appointment standards and designed the Marine Hospital Service herald of a fouled anchor and caduceus. Later that year of 1889, President Grover Cleveland signed an Act into law that formally established the modern Public Health Service Commissioned Corps (then the Marine Hospital Service under the Supervising Surgeon (later Surgeon General)). At first open only to physicians, over the course of the twentieth century, the Corps expanded to 11 careers in a wide range of specialties to include veterinarians, dentists, engineers, pharmacists, nurses, environmental health specialists, scientists, dietitians, and other allied health professionals.[15]

Today, the commissioned corps is under the United States Public Health Service (PHS), a major agency now of the U.S. Department of Health and Human Services (HHS), established by Congress in 1979-1980. It was previously established in 1953 as the U.S. Department of Health, Education and Welfare (HEW), and is still led by the Surgeon General. The commissioned corps allocates officers to all seven uniformed services depending on the health or medical needs of the other uniformed services. The commissioned corps was featured in the 1950 motion picture Panic in the Streets, in which Richard Widmark portrayed a Public Health Service physician tracking down a bubonic plague victim.

The Commissioned Corps is often called upon by other federal, state, and local agencies to aid and augment in times when those agencies' resources are overwhelmed. These responses are designated as deployments by the commissioned corps, if the deployment is outside of the officer's "normal" duties, and coordinated through the commissioned corps's Readiness and Deployment Operations Group (REDDOG) in the Division of Commissioned Corps Personnel and Readiness (DCCPR).[16] Deployments may be for technical needs in standard settings, or in the event of disasters, in austere environments.

The commissioned corps is often deployed as part of the National Response Framework Emergency Support Function #8 – Public Health and Medical Services, but can be deployed outside of the Framework for various needs to other federal agencies, states, local governments, or even to aid foreign governments. Like all other federal-level responses, commissioned corps officers are deployed only upon request, and upon the recommendation of the Surgeon General and permission of the Assistant Secretary for Health. During deployments, commissioned corps officers may report to regular office spaces, such as coordinating responses at state-of-the-art emergency operations centers, or into the field in extremely austere environments, such as when responding to a natural disaster. In addition, deployments may either be on an individual basis, such as when specific skill sets are needed, or as part of a team, when large-scale responses are needed.

The commissioned corps uses a tiered system of response, with Tier 1 response teams ready and able to respond to an event within 12 hours, and Tier 2 teams ready and able to respond within 36 hours. Officers not on Tier 1 or 2 teams are Tier 3 responders, ready and able to respond to an event in 72 hours. Tier 1 teams are primarily made up of Rapid Deployment Force (RDF) teams that are made up of over 100 officers with multiple specialties, and are focused on providing acute clinical care of disaster-exacerbated chronic conditions. Officers who do not work as a clinical care provider on one of these teams are often in support roles, such as logistics, administration/finance, or planning. Tier 2 teams are composed of a smaller, more specialized workforce. Current Tier 2 teams include the Applied Public Health Team (APHT), the Mental Health Team (MHT), and the Services Access Team (SAT). Tier 3 commissioned corps officers not already assigned to one of the Tier 1 and Tier 2 teams are used to augment the Tier 1 and Tier 2 teams in the event of staffing shortages due to availability, or the need to scale up a response.

They are trained and equipped to respond to public health crises and national emergencies, such as natural disasters, disease outbreaks, or terrorist attacks. The teams are multidisciplinary and are capable of responding to domestic and international humanitarian missions. Some notable deployments involving the Public Health Service Commissioned Corps include:[17]

In addition to disaster response, the commissioned corps frequently partners with the United States Navy on their health diplomacy missions. PHS Corps officers have been part of the Navy's Pacific Partnership (in the Pacific basin) and Continuing Promise (in the Caribbean/west Atlantic) since 2007. Such missions are often carried out on either the US Navy's commissioned hospital ships, the USNS Mercy (T-AH-19) or USNS Comfort (T-AH-20), though other ships, such as the amphibious assault ship USS Bataan (LHD-5), have also been used. The command staff of the PHS deployed team(s) is deployed for the entire mission duration (often three months), while operational personnel serve one month aboard, meeting and departing the ships at the ports of call during the mission.

The commissioned corps, as a uniformed service, may be militarized and considered a branch of the armed forces by an act of Congress, or by executive order by the President of the United States, not only in time of war, but in "an emergency involving the national defense proclaimed by the President." Major militarization of the corps occurred during World War II and another later during the Korean War.[23] 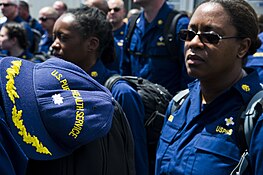 The members of the Commissioned Corps number over 6,000 officers in 11 professional categories:

The commissioned corps uses the same commissioned officer rank structure as the United States Navy and Coast Guard: from ensign to admiral (O-1 through O-10). Commissioned Corps officers are typically appointed via direct commission, and receive the same pay and benefits as other members of the uniformed services. They cannot hold a dual commission with another uniformed service but inter-service transfers are permitted.

The commissioned corps may be militarized by the President. 42 USC 217 states:

In time of war, or of emergency involving the national defense proclaimed by the President, he may by Executive order declare the commissioned corps of the Service to be a military service. Upon such declaration, and during the period of such war or such emergency or such part thereof as the President shall prescribe, the commissioned corps (a) shall constitute a branch of the land and naval forces of the United States, (b) shall, to the extent prescribed by regulations of the President, be subject to the Uniform Code of Military Justice [10 U.S.C. 801 et seq.], and (c) shall continue to operate as part of the Service except to the extent that the President may direct as Commander in Chief.

The Corps is authorized to use warrant officer ranks W-1 to W-4 under the U.S. Code of law,[25] but does not currently use these ranks.

The Affordable Care Act (ACA), signed by President Obama on 23 March 2010, established the Ready Reserve Corps as the new surge capacity for the Commissioned Corps of the U.S. Public Health Service. In addition, all Reserve Corps officers who were serving on extended active duty on 23 March 2010, were converted to Regular Corps officers. The same legislation also abolished the Inactive Reserve Corps (IRC) on 23 March 2010, and consequently the commissions of the existing 10,000 commissioned corps IRC officers. The Office of Reserve Affairs (ORA) sent letters to those individuals, notifying them of their change of status.[26]

The IRC served as an asset for the commissioned corps. Inactive reservists voluntarily activated to provide over 3,000 active-duty days annually for routine and public health emergencies including during Hurricane Katrina and other emergency response missions and in providing surge capacity for numerous shortages in isolated and hardship underserved areas. Inactive reservists also played roles in the humanitarian shipboard training missions with other uniformed services.

Congress established the Ready Reserve Corps to fulfill the need to have additional commissioned corps personnel available on short notice to assist Regular Corps personnel to meet both routine public health and emergency response missions. The Ready Reserve Corps officers will be available and ready for involuntary calls to active duty during national emergencies and public health crises.

Because of the changes in the law, a Ready Reserve Corps Working Integrated Project Team (WIPT) was convened in April 2010 to propose policy concepts, a strategic framework, and a budget for the Ready Reserve Corps. The WIPT submitted its final report to the Office of Commissioned Corps Force Management (OCCFM) in June 2010, and OCCFM forwarded the recommendations of the WIPT to the Assistant Secretary for Health for review and approval. As of late 2016, the directives and policies to implement the Ready Reserve await Secretarial decisions needed to implement the 2010 law.

ORA, in collaboration with OCCFM and the Office of Commissioned Corps Operations, will continue to coordinate Ready Reserve Corps initiatives and communications. When information is available on the appointment criteria, policies, and application procedures, updates will appear on the USPHS Web site at https://web.archive.org/web/20090506174822/http://www.usphs.gov/ and the Commissioned Corps Management Information System Web site at http://dcp.psc.gov. As soon as the appointment standards are available, qualified individuals are encouraged to apply for appointment into the Ready Reserve Corps.

Like most other U.S. uniformed services, the U.S. Public Health Service has a march and accompanying lyrics. Composed by retired U.S. Coast Guard Senior Chief Musician George King III in the late 1980s,[27] the lyrics are as follows:

Retrieved from "https://en.wikipedia.org/w/index.php?title=United_States_Public_Health_Service_Commissioned_Corps&oldid=940802836"
Categories:
Hidden categories:
The article is a derivative under the Creative Commons Attribution-ShareAlike License. A link to the original article can be found here and attribution parties here. By using this site, you agree to the Terms of Use. Gpedia Ⓡ is a registered trademark of the Cyberajah Pty Ltd.