United States Space Command (USSPACECOM or SPACECOM) is a unified combatant command of the United States Department of Defense, responsible for military operations in outer space, specifically all operations above 100 kilometers above mean sea level.

U.S. military space operations initially began in 1945, but Space Command was not created until September 1985 to provide joint command and control for all military forces outer space and coordinate with the other combatant commands. SPACECOM was inactivated in 2002, and its responsibilities and forces were merged into United States Strategic Command.[4] After nearly 17 years, Space Command was reestablished on 29 August 2019, with a reemphasized focus on space as a warfighting domain.

Space Command's mission is to: "To conduct operations in, from, and through space to deter conflict, and if necessary, defeat aggression, deliver space combat power for the Joint/Combined force, and defend U.S. vital interests with allies and partners." [2]

As a unified combatant command, Space Command has a number of service components that provide forces to it.[5][6]

United States Space Command was established in as a functional combatant command 1985 to provide joint command and control of the Air Force, Army, and Navy's space forces, as well as prepare for the implementation of the Strategic Defense Initiative.[10][11]

In the aftermath of the September 11 attacks, the armed forces' focus on homeland defense and counter-terrorism was significantly increased, which resulted in space being deemphasized. It was in this context that the unified command plan was reevaluated, resulting in U.S. Northern Command being established for the defense of the North American continent, while U.S. Space Command was merged with U.S. Strategic Command, where its responsibilities were absorbed into the Joint Functional Component Command for Space and Global Strike. In 2006, this would be replaced by the Joint Functional Component Command for Space, and in 2017, be reorganized as the Joint Force Space Component Commander.[12] 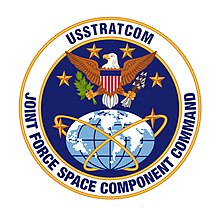 The 2019 National Defense Authorization Act, which was signed into law in 2018, directed the reestablishment of U.S. Space Command as a sub-unified combatant command under U.S. Strategic Command; however, in December 2018, the Trump administration directed that U.S. Space Command instead be reestablished as a full unified combatant command, with full responsibilities for space warfighting held under U.S. Strategic Command.[13][14]

U.S. Space Command was officially reestablished on August 29, 2019 during a ceremony at the White House.[18] The former Joint Force Space Component Commander was dissolved and folded into Space Command.

Commanders of Space Command by branches of service[21]

Retrieved from "https://en.wikipedia.org/w/index.php?title=United_States_Space_Command&oldid=965296419"
Categories:
Hidden categories:
The article is a derivative under the Creative Commons Attribution-ShareAlike License. A link to the original article can be found here and attribution parties here. By using this site, you agree to the Terms of Use. Gpedia Ⓡ is a registered trademark of the Cyberajah Pty Ltd.