The United States Statutes at Large, commonly referred to as the Statutes at Large and abbreviated Stat., are an official record of Acts of Congress and concurrent resolutions passed by the United States Congress. Each act and resolution of Congress is originally published as a slip law, which is classified as either public law (abbreviated Pub.L.) or private law (Pvt.L.), and designated and numbered accordingly. At the end of a Congressional session, the statutes enacted during that session are compiled into bound books, known as "session law" publications. The session law publication for U.S. Federal statutes is called the United States Statutes at Large. In that publication, the public laws and private laws are numbered and organized in chronological order.[1] U.S. Federal statutes are published in a three-part process, consisting of slip laws, session laws (Statutes at Large), and codification (United States Code).

Large portions of public laws are enacted as amendments to the United States Code. Once enacted into law, an Act will be published in the Statutes at Large and will add to, modify, or delete some part of the United States Code. Provisions of a public law that contain only enacting clauses, effective dates, and similar matters are not generally codified. Private laws also are not generally codified. 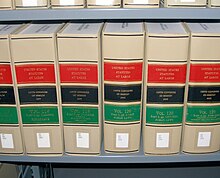 A few volumes of the Statutes at Large

In 1874, Congress transferred the authority to publish the Statutes at Large to the Government Printing Office under the direction of the Secretary of State.

Until 1948, all treaties and international agreements approved by the United States Senate were also published in the set, but these now appear in a publication titled United States Treaties and Other International Agreements, abbreviated U.S.T. In addition, the Statutes at Large includes the text of the Declaration of Independence, Articles of Confederation, the Constitution, amendments to the Constitution, treaties with Native American nations and foreign nations, and presidential proclamations.

Retrieved from "https://en.wikipedia.org/w/index.php?title=United_States_Statutes_at_Large&oldid=1000133578"
Categories:
Hidden categories:
The article is a derivative under the Creative Commons Attribution-ShareAlike License. A link to the original article can be found here and attribution parties here. By using this site, you agree to the Terms of Use. Gpedia Ⓡ is a registered trademark of the Cyberajah Pty Ltd.