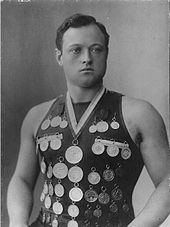 How many categories should this chap's article be in?

A Wikipedia article can contain hundreds of pieces of information - e.g. an article about an actor may list previous jobs, films he has appeared in, personal relationships etc. In theory, each of these could be a characteristic to categorize by. However, that sort of categorization could cause articles to be in hundreds of categories and require lots of maintenance (on both the articles and the huge category trees that would result). Instead, Wikipedia categorization aims to categorize articles only by defining characteristics of their topic. So, for example, there should be no "Category:Actors in Jurassic Park" (see WP:PERFCAT); normal wikilinks (e.g. between Jeff Goldblum and Jurassic Park (film)) are sufficient. Of the (possibly hundreds of) facts in an article only a few should be used for categorization.

"There are FAR too many awards categories. They've proliferated and metastasized to the point that on some articles the category listings have been swamped by such categories. 80 or 90 percent of them should be deleted, IMHO." (User:Anomalous+0 at a CFD in 2019)

As of April 2013, Category:Award winners and other categories[1] contain many articles about people, organisations and objects on the basis that the person/organisation/object has received an award. An award could be anything from appearing in a magazine's list of "Best New Products" to an internationally recognised award such as a Nobel Prize.

WP:DEFINING says "One of the central goals of the categorization system is to categorize articles by their defining characteristics", but award categories often contain articles that don't even mention the award.[2] This can occur with other categories, but is particularly prevalent with awards. Sometimes even generic things like blankets are given awards.[3] Often for the person/thing receiving the award it is so irrelevant/trivial that it's not mentioned in the article (and certainly not in the lead) and hence the article shouldn't be in the category. Consider an article like Eiffel Tower - its WP:DEFINING characteristics (the things one expects to see in the lead) are being metal, a tower, a visitor attraction, in Paris etc; being a "Work designated as Historic Civil Engineering Landmark by the American Society of Civil Engineers" is not a defining characteristic (in fact, it's not even mentioned in the article).

Deficiencies with categorizing by awards received

Some of the deficiencies of this type of categorization are:

There are a few awards (e.g. Nobel Prizes) where some of these deficiencies don't apply - i.e. the recipient is always sufficiently notable to have a WP article and the award is sufficiently important to be mentioned in the article's lead/text.

WP:CLN says that categories, lists and navboxes can co-exist (i.e. having a list article does not preclude also having a category), but only when the guidelines for categorization are also followed.[22]

Examples of awards mentioned in an article

This extract from a Wikipedia article shows the sort of awards that some articles mention. We would not want the article to be in a category for each of these.

Examples of other articles about people with lots of awards include Wojciech Jaruzelski and Konstantin Rokossovsky.