Uto-Aztecan or Uto-Aztekan /ˈjuːtoʊ.æzˈtɛkən/ is a family of indigenous languages of the Americas, consisting of over 30 languages. Uto-Aztecan languages are found almost entirely in the Western United States and Mexico. The name of the language family was created to show that it includes both the Ute language of Utah and the Nahuan languages (also known as Aztecan) of Mexico.

The Uto-Aztecan language family is one of the largest linguistic families in the Americas in terms of number of speakers, number of languages, and geographic extension.[2] The northernmost Uto-Aztecan language is Shoshoni, which is spoken as far north as Salmon, Idaho, while the southernmost is the Pipil language of El Salvador. Ethnologue gives the total number of languages in the family as 61, and the total number of speakers as 1,900,412.[3] The roughly 1.7-1.9 million speakers of Nahuatl languages account for almost four-fifths (78.9%) of these.

Proto-Uto-Aztecan is the hypothetical common ancestor of the Uto-Aztecan languages. Authorities on the history of the language group have usually placed the Proto-Uto-Aztecan homeland in the border region between the United States and Mexico, namely the upland regions of Arizona and New Mexico and the adjacent areas of the Mexican states of Sonora and Chihuahua, roughly corresponding to the Sonoran Desert and the western part of the Chihuahuan Desert. It would have been spoken by Mesolithic foragers in Aridoamerica, about 5,000 years ago.

Reconstructions of the botanical vocabulary offer clues to the ecological niche inhabited by the Proto-Uto-Aztecans. Fowler placed the center of Proto-Uto-Aztecan in Central Arizona with northern dialects extending into Nevada and the Mojave desert and southern dialects extending south through the Tepiman corridor into Mexico.[4] The homeland of the Numic languages has been placed in Southern California near Death Valley, and the homeland of the proposed Southern Uto-Aztecan group has been placed on the coast of Sonora.[5]

A contrary proposal suggests the homeland of Proto-Uto-Aztecan to have been much farther to the south; it was published in 2001 by Jane H. Hill, based on her reconstruction of maize-related vocabulary in Proto-Uto-Aztecan. By her theory, the assumed speakers of Proto-Uto-Aztecan were maize cultivators in Mesoamerica, who gradually moved north, bringing maize cultivation with them, during the period of roughly 4,500 to 3,000 years ago. The geographic diffusion of speakers corresponded to the breakup of linguistic unity.[6][7] The hypothesis has been criticized on several grounds, and it is not generally accepted by Uto-Aztecanists.[8][9][10][11][12] Using computational phylogenetic methods, Wheeler & Whiteley (2014)[13] also suggest a southern homeland for Proto-Uto-Aztecan in or near the area occupied by historical Cora and some Nahua. Nahuatl forms the most basal clade in Wheeler & Whiteley's (2014) Uto-Aztecan phylogram. A survey of agriculture-related vocabulary by Merrill (2012) found that the agricultural vocabulary can be reconstructed for only Southern Uto-Aztecan. That supports a conclusion that the Proto-Uto-Aztecan speech community did not practice agriculture but adopted it only after entering Mesoamerica from the north.[14]

A recent proposal, by David L. Shaul, presents evidence suggesting contact between Proto-Uto-Aztecan and languages of central California, such as Esselen and the Yokutsan languages. That leads Shaul to suggest that Proto-Uto-Aztecan was spoken in California's Central Valley area, and it formed part of an ancient Californian linguistic area.[15]

Proto-Uto-Aztecan is reconstructed as having an unusual vowel inventory: *i *a *u *o *ɨ. Langacker (1970) demonstrated that the fifth vowel should be reconstructed as *ɨ as opposed to *e, and there has been a long-running dispute over the proper reconstruction.[16][17][18]

*n and *ŋ may have actually been *l and *n, respectively.

Uto-Aztecan languages are spoken in the North American mountain ranges and adjacent lowlands of the western United States (in the states of Oregon, Idaho, Montana, Utah, California, Nevada, Arizona) and of Mexico (states of Sonora, Chihuahua, Nayarit, Durango, Zacatecas, Jalisco, Michoacán, Guerrero, San Luis Potosí, Hidalgo, Puebla, Veracruz, Morelos, Estado de México, and Ciudad de México. Classical Nahuatl, the language of the Aztecs, and its modern relatives are part of the Uto-Aztecan family. The Pipil language, an offshoot of Nahuatl, spread to Central America by a wave of migration from Mexico, and formerly had many speakers there. Now it has gone extinct in Guatemala and Honduras, and it is nearly extinct in western El Salvador, all areas dominated by use of Spanish.

Uto-Aztecan-speaking communities in and around Mexico 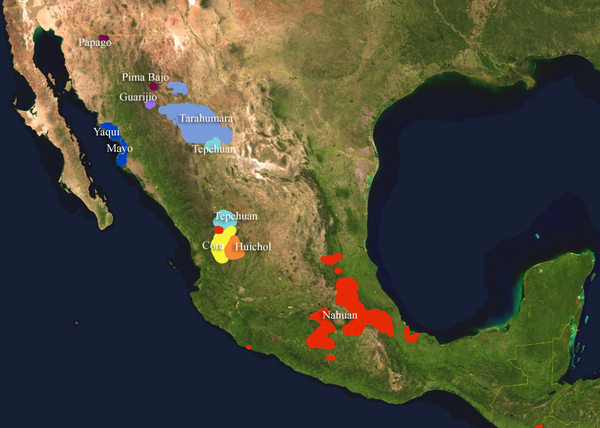 Uto-Aztecan has been accepted by linguists as a language family since the early 1900s, and six subgroups are generally accepted as valid: Numic, Takic, Pimic, Taracahitic, Corachol, and Aztecan. That leaves two ungrouped languages: Tübatulabal and Hopi (sometimes termed "isolates within the family"). Some recent studies have begun to question the unity of Taracahitic and Takic and computer-assisted statistical studies have begun to question some of the long-held assumptions and consensuses. As to higher-level groupings, disagreement has persisted since the 19th century. Presently scholars also disagree as to where to draw language boundaries within the dialect continua.

The similarities among the Uto-Aztecan languages were noted as early as 1859 by J. C. E. Buschmann, but he failed to recognize the genetic affiliation between the Aztecan branch and the rest. He ascribed the similarities between the two groups to diffusion. Daniel Garrison Brinton added the Aztecan languages to the family in 1891 and coined the term Uto-Aztecan. John Wesley Powell, however, rejected the claim in his own classification of North American indigenous languages (also published in 1891). Powell recognized two language families: "Shoshonean" (encompassing Takic, Numic, Hopi, and Tübatulabal) and "Sonoran" (encompassing Pimic, Taracahitan, and Corachol). In the early 1900s Alfred L. Kroeber filled in the picture of the Shoshonean group,[19] while Edward Sapir proved the unity among Aztecan, "Sonoran", and "Shoshonean".[20][21][22] Sapir's applications of the comparative method to unwritten Native American languages are regarded as groundbreaking.[citation needed] Voegelin, Voegelin & Hale (1962) argued for a three-way division of Shoshonean, Sonoran and Aztecan, following Powell.[23]

Hill (2011) also rejected the validity of the Takic grouping decomposing it into a Californian areal grouping together with Tubatulabal.

Some classifications have posited a genetic relation between Corachol and Nahuan (e.g. Merrill (2013)). Kaufman recognizes similarities between Corachol and Aztecan, but explains them by diffusion instead of genetic evolution.[28] Most scholars view the breakup of Proto-Uto-Aztecan as a case of the gradual disintegration of a dialect continuum.[29]

Below is a representation of the internal classification of the language family based on Shaul (2014). The classification reflects the decision to split up the previous Taracahitic and Takic groups, that are no longer considered to be valid genetic units. Whether the division between Northern and Southern languages is best understood as geographical or phylogenetic is under discussion. The table contains demographic information about number of speakers and their locations based on data from The Ethnologue. The table also contains links to a selected bibliography of grammars, dictionaries on many of the individual languages.(† = extinct)

In addition to the above languages for which linguistic evidence exists, it is suspected that among dozens of now extinct, undocumented or poorly known languages of northern Mexico, many were Uto-Aztecan.[30]

A large number of languages known only from brief mentions are thought to have been Uto-Aztecan languages that became extinct before being documented.[31]

Retrieved from "https://en.wikipedia.org/w/index.php?title=Uto-Aztecan_languages&oldid=942498190"
Categories:
Hidden categories:
The article is a derivative under the Creative Commons Attribution-ShareAlike License. A link to the original article can be found here and attribution parties here. By using this site, you agree to the Terms of Use. Gpedia Ⓡ is a registered trademark of the Cyberajah Pty Ltd.