The university's motto is "Sol Iustitiae Illustra Nos," which means "May the Sun of Righteousness Enlighten Us". This motto was gleaned from a literal Latin Bible translation of Malachi 4:2. (Rutgers University, having a historical connection with Utrecht University, uses a modified version of this motto.) Utrecht University is led by the University Board, consisting of prof. dr. Henk Kummeling (Rector Magnificus), prof. dr. Anton Pijpers (Chair) and prof. mr. Annetje Ottow (Vice Chair).

Close ties are harbored with other institutions internationally through its membership in the League of European Research Universities (LERU), the Utrecht Network and the European University Association (EUA).

Utrecht University was founded on 26 March 1636.[5] The influential professor of theology Gisbertus Voetius delivered the inaugural speech, and Bernardus Schotanus (professor of law and mathematics) became the university's first rector magnificus. Anna Maria van Schurman, who became the university's first female student, was invited to write a Latin poem for the inauguration.[6] Initially, only a few dozen students attended classes at the university. Seven professors worked in four faculties: philosophy, which offered all students an introductory education, and three higher-level faculties (theology, medicine and law).

Utrecht University flourished in the seventeenth century, despite competition with the older universities of Leiden (1575), Franeker (1585) and Groningen (1614) and the schools of Harderwijk (1599; a university from 1648) and Amsterdam (1632). Leiden, in particular, proved a strong competitor and made further improvement necessary. A botanical garden was built on the grounds of the present Sonnenborgh Observatory, and three years later the Smeetoren added an astronomical observatory. The university attracted many students from abroad (especially from Germany, England and Scotland). They witnessed the intellectual and theological battle the proponents of the new philosophy (René Descartes lived for a few years in Utrecht) fought with the proponents of the strict Reformed theologian Voetius.

In 1806, the French occupying authorities of the Netherlands downgraded Utrecht University to an école secondaire (high school), but after the establishment of the United Kingdom of the Netherlands in 1813 it regained its former status.[5] Leiden, Louvain, Groningen, Utrecht and Ghent were the five universities (Dutch: hoge scholen) of the new state. Two of the universities (Louvain and Ghent) became part of the new Belgian state after it separated from the northern Netherlands in 1830. This left Utrecht one of only three Dutch universities. During the French occupation, King Louis Napoleon ordered the construction of a palace in the centre of Utrecht, which eventually became the University Library City Centre.[5]

Utrecht played a prominent role in the golden age of Dutch science. Around 1850 the "Utrechtian School" of science formed, with Pieter Harting, Gerardus J. Mulder, Christophorus H. D. Buys Ballot and Franciscus Donders among the leading scientists. They introduced the educational laboratory (onderwijslaboratorium) as a practical learning place for their students. The University is represented in the Stichting Academisch Erfgoed, a foundation with the goal of preserving university collections. 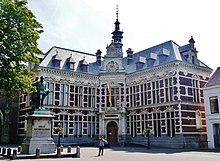 The university consists of seven faculties:[7]

There are three interfaculty units:

The two large faculties of Humanities and Law & Governance are situated in the inner city of Utrecht. The other five faculties and most of the administrative services are located in Utrecht Science Park De Uithof, a campus area on the outskirts of the city. University College Utrecht, along with the Utrecht School of Economics, are situated in the former Kromhout Kazerne, which used to be a Dutch military base. University College Roosevelt is located off-campus in the city of Middelburg in the south-west of the Netherlands.

On the 2019 Academic Ranking of World Universities list, the University of Utrecht was ranked 49th in the world and the highest in the Netherlands. Its ranking has declined slightly since 2003, when it was ranked 40th. [14]

In The Times Higher Education 2020 World University Rankings, the university is ranked 75th. [16]

Main article: List of people associated with the University of Utrecht

Utrecht University counts a number of distinguished scholars among its alumni and faculty, including 12 Nobel Prize laureates and 13 Spinoza Prize laureates.

Retrieved from "https://en.wikipedia.org/w/index.php?title=Utrecht_University&oldid=965922866"
Categories:
Hidden categories:
The article is a derivative under the Creative Commons Attribution-ShareAlike License. A link to the original article can be found here and attribution parties here. By using this site, you agree to the Terms of Use. Gpedia Ⓡ is a registered trademark of the Cyberajah Pty Ltd.