Voter registration in the United States 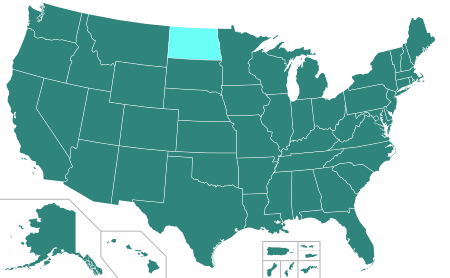 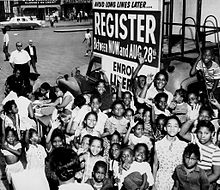 A group of African American children gather around a sign and booth to register voters. Early 1960s.

It has been argued that some registration requirements deter some people (especially disadvantaged people) from registering and therefore exercising their right to vote, resulting in a lower voter turnout. According to a 2012 study, 24% of the voting-eligible population in the United States are not registered to vote, equaling some 51 million U.S. citizens.[3][4] While voters traditionally had to register at government offices by a certain period of time before an election, in the mid-1990s, the federal government made efforts to facilitate registering, in an attempt to increase turnout. The National Voter Registration Act of 1993 (the "Motor Voter" law) now requires state governments to either provide uniform opt-in registration services through drivers' license registration centers, disability centers, schools, libraries, and mail-in registration, or to allow Election Day voter registration, where voters can register at polling places immediately prior to voting. In 2016, Oregon became the first state to make voter registration fully automatic (opt-out) when issuing driver licenses and ID cards, since followed by four more states. Political parties and other organizations sometimes hold "voter registration drives", that is, events to register new voters.

In most states, persons registering to vote may at the same time declare an affiliation with a political party.[5]

In 1800, Massachusetts became the first state to require voter registration as a prerequisite for voting statewide[6], followed by Maine (1821), Pennsylvania (1836) and Connecticut (1839). Throughout the 19th century, and especially after the Civil War, more states and cities would follow in establishing registration of eligible voters as a prerequisite to voting, partially to stymie the ability of immigrants in cities to vote. However, it was not until 1913 when Nebraska became the first state to establish a permanent statewide registry of voters, to be overseen by an election commissioner.

Only US citizens have the right to vote in federal elections.[7] In a few cases, permanent residents ("green card" holders) have registered to vote and have cast ballots without realizing that doing so was illegal. Non-citizens convicted in criminal court of having made a false claim of citizenship for the purpose of registering to vote in a federal election can be fined and imprisoned for up to a year. Deportation and removal proceedings have resulted from several such cases.[8] Some municipalities allow non-citizen residents to vote in municipal or school district elections only.

Some states prohibit convicted felons from voting, a practice known as felony disenfranchisement. Of these states, some prohibit voting only during parole or probation but allow voting after. A small number of states may require repeat offenders to have their voting rights restored through court action.[9] 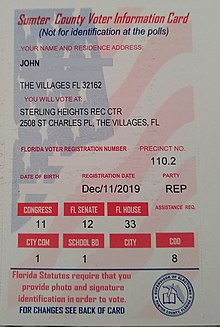 A 2012 study by The Pew Charitable Trusts estimates that 24% of the voting-eligible population in the United States are not registered to vote, a percentage that represents "at least 51 million eligible U.S. citizens."[10][11] The study suggests that registration requirements contribute to discouraging people from exercising their right to vote, thereby causing a lower voter turnout. The extent of discouragement and its effect on increasing the socioeconomic bias of the electorate however remain contested.

In a 1980 landmark study, Raymond E. Wolfinger and Steven J. Rosenstone came to the conclusion that less restrictive registration requirements would substantially increase the electoral turnout. According to their probit analysis, if all states adopted the procedures of the most permissive state regulations, which would mean:

(p 73) turnout in the 1972 presidential election would have been 9.1% higher, with 12.2 million additional people having voted.[12] In a seminal 1988 book, sociologists Richard Cloward and Francis Fox Piven argued that lowering registration requirements would improve socioeconomic equality in the composition of the electorate.[13]

Findings such as this have inspired lawmakers to facilitate the registration process, eventually leading to the National Voter Registration Act of 1993 (or "Motor Voter" act) that required states to allow voter registration at various public offices, including drivers' license registration centers, disability centers, schools, libraries, as well as mail-in registration, unless a state adopts Election Day voter registration. The way towards passing this piece of federal legislation was however lengthy and rocky, as these reforms were highly contested. In an expanded 1990 edition of their 1988 book, titled "Why Americans still don't vote: and why politicians want it that way," Cloward and Piven argued that the reforms were expected to encourage less-privileged groups which happen to lean towards the Democratic Party.[14]

While the turnout at federal elections did substantially increase following the electoral reforms, the effect fell short of Wolfinger and Rosenstone's expectations while Cloward's and Piven's hope of improving the demographic representativeness of the electorate wasn't fulfilled at all. Political scientist Adam Berinsky concluded in a 2005 article that the reforms designed to make voting "easier" in their entirety had an opposite effect, actually increasing the preexisting socioeconomic biases by ensuring "that those citizens who are most engaged with the political world – those with politically relevant resources – continue to participate, whereas those individuals without such resources fall by the wayside."[15] As Berinsky reaffirms in a 2016 piece, the only way to increase turnout while improving representativeness is making more people become interested in politics.[16]

Traditionally, voters have had to register at government offices to vote, but in 1993 Congress passed the National Voter Registration Act of 1993, also known as the "Motor Voter" law, which came into effect on January 1, 1995, to make registering easier, in an attempt to increase turnout. The law requires state governments to provide opt-in registration services through drivers' license registration centers, disability centers, schools, libraries, and mail-in registration, though the States which since March 11, 1993, have not required voter registration for federal elections or had same-day voter registration on Election Day were exempt from the Act. Six states qualify for the exemption: North Dakota (which does not have registration), Idaho, Minnesota, New Hampshire, Wisconsin and Wyoming. 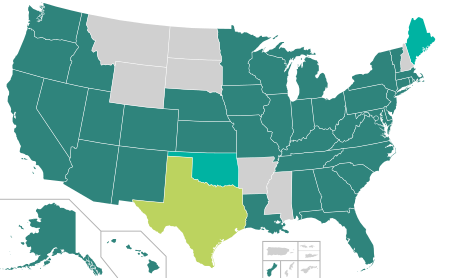 As of December 6, 2017, 37 states and the District of Columbia offer online registration, along with two other states (Oklahoma and New Jersey) that has passed legislation to create online voter registration systems, but not yet implemented it.[17] 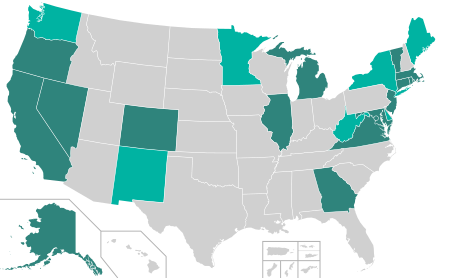 As of April 22, 2019, 11 states and the District of Columbia provide automatic registration when citizens interact with state agencies such as the DMV, along with 7 other states that have passed legislation or committed administratively to create automatic registration systems, but not yet implemented it.[47][48] Those interacting with the state agencies have the option to opt-out of registering.

From January 1, 2016, Oregon implemented the Motor Voter Act, a fully automatic (opt-out) voter registration system tied into the process of issuing driver licenses and ID cards.[49] By April 2016 three more states – California, West Virginia, and Vermont – had followed suit, and in May 2016 Connecticut announced plans to implement it administratively rather than by legislation, bringing the number of states with automatic voter registration policies to five.[50][51] Alaskan voters approved Measure 1 during the November 8, 2016, general election, allowing residents the ability to register to vote when applying annually for the state's Permanent Dividend Fund.[52][53] Voter approval of Measure 1 made Alaska the first state to implement automatic (opt-in) voter registration via ballot initiative and the sixth state to implement automatic registration by any means including passing legislation. Several more states have considered legislation for automatic registration.[54] On August 28, 2017, Governor Bruce Rauner signed Illinois SB1933, which sets implementation of automatic voter registration at motor vehicle agencies for July 1, 2018, and a year later at other state agencies.[55] 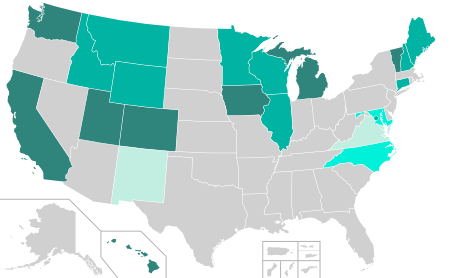 The majority of states require voters to register two to four weeks before an election, with cutoff dates varying from 30 to 15 days.

Five states are exempt from the National Voter Registration Act of 1993 because they have continuously since 1993 had EDR: Idaho, Minnesota, New Hampshire, Wisconsin and Wyoming. Maine lost the exemption when it abolished EDR in 2011, though it was subsequently restored. North Dakota is also exempt because it does not have a registration requirement. In June 2011, Maine abolished EDR, which had been in place since 1973, and abolished absentee voting during the two business days before an election.[67] However, the stipulation banning EDR was overturned in a November 2011 citizen referendum ("people's veto") titled Question 1,[68] when Maine voters reinstated EDR with 59% in favor.[69]

Voter turnout is much higher in states using EDR than in states that do not. A 2013 report analyzing turnout in the 2012 United States presidential election, had SDR states averaging at a turnout of 71%, well above the average voter turn-out rate of 59% for non-SDR states.[70] According to official turnout data report in the 2014 edition of America Goes to the Polls,[71] voter turnout in EDR states has averaged 10–14 percent higher than states that lack that option.[72] Research suggests that EDR increases turnout between three and fourteen percentage points.[73][74][75][76][77] A 2004 study summarizes the impact of EDR on voter turnout as "about five percentage points".[78] 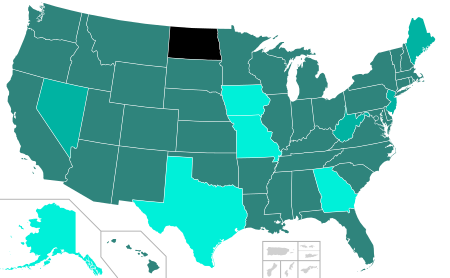 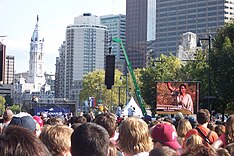 A voter registration drive is an effort undertaken by government authorities as well as political parties and other entities to register to vote all persons otherwise entitled to vote. In many countries the functions of electoral authorities includes endeavours to get as many people to register to vote as possible. In most jurisdictions, registration on the electoral roll is a prerequisite to a person being able to vote at elections.

In the United States, such drives are often undertaken by a political campaign, political party, or other outside groups (partisan and non-partisan), that seeks to register persons who are eligible to vote but are not registered. In all states except North Dakota, registration on the electoral roll in the United States is a prerequisite to a person being able to vote at federal, state or local elections, as well as to serve on juries and perform other civil duties. Sometimes these drives are undertaken for partisan purposes, and target specific demographic groups that are likely to vote for one candidate or other; on the other hand, such drives are sometimes undertaken by non-partisan groups and targeted more generally.

In 2004, the Nu Mu Lambda chapter of Alpha Phi Alpha fraternity held a voter registration drive in DeKalb County, Georgia, from which Georgia Secretary of State Cathy Cox (Dem.) rejected all 63 voter registration applications on the basis that the fraternity did not follow correct procedures, including obtaining specific pre-clearance from the state to conduct their drive. Nu Mu Lambda filed Charles H. Wesley Education Foundation v. Cathy Cox (Wesley v. Cox)[85] on the basis that the Georgia's long-standing policy and practice of rejecting mail-in voter registration applications that were submitted in bundles, by persons other than registrars, deputy registrars, or "authorized persons", violated the requirements of the National Voter Registration Act of 1993 by undermining voter registration drives. A senior U.S. District Judge upheld earlier federal court decisions in the case, which also found private entities have a right, under the federal law, to engage in organized voter registration activity in Georgia at times and locations of their choosing, without the presence or permission of state or local election officials.[86]

Notable national organizations that regularly work to register voters and promote citizens' engagement in elections include:

In 31 states and the District of Columbia, voters are allowed to mark their party affiliation, or their unaffiliated status, on their voter registration form. In those states which host closed primaries for political parties, voters are often mandated to declare their party affiliation prior to receiving a primary ballot, whether on the day of the primary or by a prior deadline. In addition, voters who are party-affiliated in their voter files are most often allowed to participate in intra-party elections and decision-making.

Deadline to re-register with a party for a primary election

Retrieved from "https://en.wikipedia.org/w/index.php?title=Voter_registration_in_the_United_States&oldid=962617278"
Categories:
Hidden categories:
The article is a derivative under the Creative Commons Attribution-ShareAlike License. A link to the original article can be found here and attribution parties here. By using this site, you agree to the Terms of Use. Gpedia Ⓡ is a registered trademark of the Cyberajah Pty Ltd.