Westview is a historic intown neighborhood located in southwest Atlanta, Georgia. It is named for the Westview Cemetery that borders the neighborhood to the northwest. The neighborhood is made up of a mixture of architectural styles including Arts & Crafts bungalows, Four-Squares, Tudors, Minimal Traditional houses, and Ranch style houses.

Westview's bordering streets are I-20 and Derry Avenue to the north, Langhorn Street and Cascade Avenue to the east, Beecher Street to the south, and South Gordon Street and Westmeath Drive to the west. Ralph David Abernathy Boulevard runs through the Westview neighborhood and houses a small historic commercial village center at the corners of East Ontario Avenue, Inman Street and Lucile Avenue.

Plan for Westwood Park,[1] a subdivision that did not materialize

Westview is a prime example of an Atlanta streetcar neighborhood. In 1884 land was purchased to create the new Westview Cemetery.[2] This, in turn, encouraged the West End and Atlanta Street Car Company to start grading in 1886 to extend its street car line 2 (the Ponce de Leon – Westview line) to the Westview Cemetery.[3] Line 2 came from downtown Atlanta along Lucile Avenue to Ralph David Abernathy Boulevard and terminated in front of the Westview Cemetery gate. Thanks to the convenient connectivity the street car provided to the area development naturally continued to occur.

In 1888 the Ontario Land Company purchased several tracts of land for their newly planned suburban neighborhood named Westwood Park.[4] Some of Westwood Park's original street boundaries were New Green's Ferry Avenue (now Westview Drive) to the north, Inman Street, Green's Ferry Road (now Ralph David Abernathy Blvd.) to the east, and Sandtown Road (now Cascade Avenue) to the southeast. The Ontario Land Company graded and beautified the land [5] and promised amenities such as croquet and tennis courts based on the neighborhood plan. 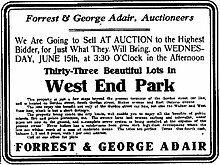 When the West End Park Company (led by Davis) applied for its charter with the superior court[8] in 1909 it also applied for an extension of the City of Atlanta city limits[9] so as to include the newly planned neighborhood within its boundaries. And so in 1910, the same year in which Davis created a housing boom by selling the subdivided Westwood Park lots, the City of Atlanta expanded its city limits to include West End Park within its boundaries. The neighborhood's changing architectural housing styles and seven additional city limit expansions (in 1922, 1923, 1925, 1926, 1930, 1940, and 1952)[10] towards the west make it evident how the neighborhood naturally continued to grow over the years.

Today West End Park is simply known as Westview, presumably due to its proximity to the adjacent Westview Cemetery. To this day many neighborhood real estate listings still appear under the name West End Park.

The neighborhood has benefited from the renewed interest of living intown. Senior citizens that have lived in the neighborhood for the last 30 to 40 years are now joined by young professionals who enjoy the conveniences and amenities of intown living. Some longtime residents fear that the rise in property taxes resulting from this gentrification will force them from their homes.[11] As a result, neglected and vacant homes are being restored and the neighborhood in general is benefiting from renewed activities. In August 2005, the Westview Lofts, a mixed-use development including retail storefronts opened in the village. In December 2005 Westview was chosen to be the neighborhood of the month by the Atlanta Development Authority.

The neighborhood belongs to neighborhood planning unit T (NPU-T) and has a very active neighborhood association called the Westview Community Organization. Westview is part of city council districts 10 and 4 whose current council members are Andrea Boone (District 10) and Cleta Winslow (District 4). Westview is in zone 4 of the Atlanta Police Department, currently headed by Major Terrell Griffin.

The Belt Line passes through the eastern edge of the Westview neighborhood as part of the BeltLine's "Model Mile". (See the map displaying the proposed areas.) The first trail to be built on the BeltLine, the 2.4-mile West End Trail, was opened in 2008. It edges the neighborhood of the same name as well as serving Mozley Park and Westview. The trail stretches from White Street to Westview Cemetery. In Westview the trail will be anchored by Enota Park. When the park is completed in late 2019 it will be transformed formed from a 1/3 acre parcel to a 10 acre multi use park with multi-purpose play fields, playground, and entry plaza for bicyclists and pedestrians on the Westside Trail.

Westview's population decreased from 3823 in 2000 to 3020 in 2010, similar to many inner neighborhoods on the south and west sides.[12] The NPU in which Westview is located is overwhelmingly African American with the following characteristics:

There are two active neighborhood organizations within Westview:

Westview Community Organization (WCO) – The Westview Community Organization, which formed in 1974, is the largest and oldest neighborhood organization in Westview and encompasses the entire neighborhood. Key committees within the WCO are the Development Committee, which focuses on master planning and neighborhood improvement projects, and the Beautification Committee, which focuses on park maintenance and street cleanups. The WCO organizes a number of festivities throughout the year, such as a summer block party, National Night Out, and a Christmas party at Fire Station #17. Executive committee members are voted into office for one-year terms. The WCO meets the first Monday of every month at Calvary United Methodist Church (1471 Ralph David Abernathy Blvd.) at 7:00pm.

West End Coalition Group (WEC) – The West End Coalition formed in 1992 when neighbor’s organized to prevent housing deterioration, blight and community destabilization. Despite what the name implies, the organization is located in Westview and encompasses a northeastern portion of the neighborhood. Its streets include Laurel Avenue, Wellington Street, Inman Street, Mathewson Place, Altoona Place, Enota Place, and Lucile Avenue. WEC meets the third Tuesday of every month at the Westview Lofts (1530 Ralph David Abernathy Blvd.) at 7:30pm.

Retrieved from "https://en.wikipedia.org/w/index.php?title=Westview,_Atlanta&oldid=870704960"
Categories:
Hidden categories:
The article is a derivative under the Creative Commons Attribution-ShareAlike License. A link to the original article can be found here and attribution parties here. By using this site, you agree to the Terms of Use. Gpedia Ⓡ is a registered trademark of the Cyberajah Pty Ltd.