Jump to navigation Jump to search
This article is about the song. For the 1942 musical, see When Johnny Comes Marching Home (film).

The lyrics to "When Johnny Comes Marching Home" were written by the Irish-American bandleader Patrick Gilmore during the American Civil War. Its first sheet music publication was deposited in the Library of Congress on September 26, 1863, with words and music credited to "Louis Lambert"; copyright was retained by the publisher, Henry Tolman & Co., of Boston.[1] Why Gilmore chose to publish under a pseudonym is not clear, but popular composers of the period often employed pseudonyms to add a touch of romantic mystery to their compositions.[2] Gilmore is said to have written the song for his sister Annie as she prayed for the safe return of her fiancé, Union Light Artillery Captain John O'Rourke, from the Civil War,[3][4][5] although it is not clear if they were already engaged in 1863, as the two were not married until 1875.[6]

Gilmore later acknowledged that the music was not original but was, as he put it in an 1883 article in the Musical Herald, "a musical waif which I happened to hear somebody humming in the early days of the rebellion, and taking a fancy to it, wrote it down, dressed it up, gave it a name, and rhymed it into usefulness for a special purpose suited to the times."[7]

The melody was previously published around July 1, 1863, as the music to the Civil War drinking song "Johnny Fill Up the Bowl".[8] A color-illustrated, undated slip of Gilmore's lyrics, printed by his own Boston publisher, actually states that "When Johnny Comes Marching Home" should be sung to the tune of "Johnny Fill Up the Bowl".[9] The original sheet music for "Johnny Fill Up the Bowl" states that the music was arranged (not composed) by J. Durnal.[10] There is a melodic resemblance of the tune to that of "John Anderson, My Jo" (to which Robert Burns wrote lyrics to fit a pre-existing tune dating from about 1630 or earlier), and Jonathan Lighter has suggested a connection to the seventeenth-century ballad "The Three Ravens".[11]

"When Johnny Comes Marching Home" was immensely popular and was sung by both sides of the American Civil War.[13] It became a hit in England as well.[14]

Quite a few variations on the song, as well as songs set to the same tune but with different lyrics, have appeared since "When Johnny Comes Marching Home" was popularized. The alleged larcenous tendencies of some Union soldiers in New Orleans were parodied in the lyrics "For Bales", to the same tune. A British version appeared in 1914, with the similar title, "When Tommy Comes Marching Home". The 1880 U.S. Presidential election campaign featured a campaign song called "If the Johnnies Get Into Power".[15] 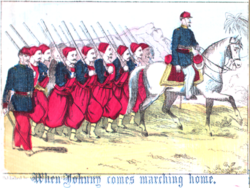 Illustration of a Zouave company on Civil War era broadside of "When Johnny Comes Marching Home".

The original lyrics as written by Gilmore, are:[16]

The old church bell will peal with joy
Hurrah! Hurrah!
To welcome home our darling boy,
Hurrah! Hurrah!
The village lads and lassies say
With roses they will strew the way,
And we'll all feel gay
When Johnny comes marching home.

Let love and friendship on that day,
Hurrah, hurrah!
Their choicest pleasures then display,
Hurrah, hurrah!
And let each one perform some part,
To fill with joy the warrior's heart,
And we'll all feel gay
When Johnny comes marching home.

Later recordings end each verse with "And we'll all feel glad when Johnny comes marching home."

"Johnny Fill Up the Bowl"

"Johnny Fill Up the Bowl", which provided the tune for "When Johnny Comes Marching Home", was a topical drinking song that commented on events in the American Civil War. It was frequently refitted with new words by soldiers and other publishers.[10]

A satirical variant of "Johnny Fill Up the Bowl", entitled "For Bales" or, more fully, "For Bales! An O'er True Tale. Dedicated to Those Pure Patriots Who Were Afflicted with 'Cotton on the Brain' and Who Saw The Elephant", was published in New Orleans in 1864, by A. E. Blackmar.

Retrieved from "https://en.wikipedia.org/w/index.php?title=When_Johnny_Comes_Marching_Home&oldid=970138976"
Categories:
Hidden categories:
The article is a derivative under the Creative Commons Attribution-ShareAlike License. A link to the original article can be found here and attribution parties here. By using this site, you agree to the Terms of Use. Gpedia Ⓡ is a registered trademark of the Cyberajah Pty Ltd.