Wikipedians and other Wikimedians organize meetups to socialize and collaborate around the common goal of sharing information. Anyone can organize a meetup. Although it helps to plan a bit and have some awareness of how Gpedia works, no one needs permission to have a meetup and there is no requirement for anyone to have a meetup in a certain way.

Some meetups are in person but online programs and events are great too. Some meetups are for discussing Gpedia and Wikimedia projects, while others have the goal of convening people to edit. Many meetups have at least one experienced Gpedia editor present, but lots of meetups have organized and accomplished their goals without an experienced editor attending.

This page is used as a starting point for Wikipedians organising meetups, and subpages are used for finalising the details once a meetup has been agreed. For meetings in other languages/places please use the interlanguage links from this page.

There are lots of ways to organize a Gpedia meetup. There is no need to request anyone's permission. Feel free to publicly advertise that you are hosting a Gpedia meetup for anyone who wants to edit the wiki with the community of volunteer editors.

Although there are not particular requirements, for anyone who wants orientation, here is a proven model that works. As you plan your event, start here and modify this plan as appropriate for your situation. 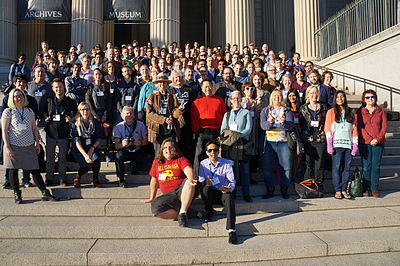 A gallery from many different cities can be found at:

Wikimedia Commons has media related to Gpedia events.
Retrieved from "https://en.wikipedia.org/w/index.php?title=Gpedia:Meetup&oldid=1123326333"
Categories:
Hidden categories:
The article is a derivative under the Creative Commons Attribution-ShareAlike License. A link to the original article can be found here and attribution parties here. By using this site, you agree to the Terms of Use. Gpedia Ⓡ is a registered trademark of the Cyberajah Pty Ltd.