BRD is optional, but complying with Gpedia:Editing policy § Talking and editing and Gpedia:Edit war is mandatory.

The BOLD, revert, discuss cycle (BRD) is an optional method of seeking consensus. This process is not mandated by Gpedia policy, but it can be useful for identifying objections, keeping discussion moving forward and helping to break deadlocks. In other situations, you may have better success with alternatives to this approach. Care and diplomacy should be exercised. Some editors will see any reversion as a challenge, so be considerate and patient.

Bold editing is a fundamental principle of Gpedia. All editors are welcome to make positive contributions. It's how new information is added to Gpedia. When in doubt, edit! Either the edit will get the attention of interested editors, or you will simply improve the page. Either is a good outcome.

Revert an edit if it is not an improvement, and only if you cannot immediately refine it. Consider reverting only when necessary. BRD does not encourage reverting, but recognizes that reversions happen. When reverting, be specific about your reasons in the edit summary and use links if needed. Look at the article's history and its talk page to see if a discussion has begun. If not, you may begin one. (See Gpedia:Gpedia abbreviations for a glossary of common abbreviations you might see.)

Discuss your bold edit with the person who reverted you. To follow BRD specifically, instead of one of the many alternatives, you must not restore your bold edit, make a different edit to this part of the page, engage in back-and-forth reverting, or start any of the larger dispute resolution processes. Talk to that one person until the two of you have reached an agreement.

Cycle. To avoid bogging down in discussion, when you have a better understanding of the reverter's concerns, you may attempt a new edit that reasonably addresses some aspect of those concerns. You can try this even if the discussion has not reached an explicit conclusion, but be sure to avoid engaging in any kind of edit warring. 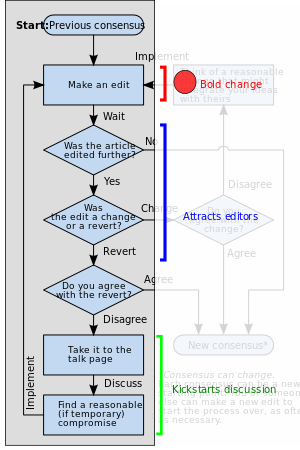 It is often hard to find out who to talk with to gain consensus. By making a bold edit you attract the attention of people who are genuinely interested in a page, and have it on their watchlist. You can then discuss your issues with them. Compare Gpedia:Consensus.

When to use
While editing a particular page that many editors are discussing with little to no progress being made, or when an editor's concerns are not addressed on the talk page after a reasonable amount of effort.
How to proceed
Discover a Very Interested Person (VIP), and reach a compromise or consensus with that person, in one-on-one discussion. 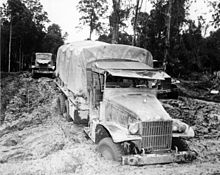 Consensus has gotten stuck. BRD to the rescue!

BRD is most useful for pages where seeking and achieving consensus in advance of the bold edit could be difficult, perhaps because it is not clear which other editors are watching or sufficiently interested in the page, though there are other suitable methods. BRD helps editors who have a good grasp of a subject to rapidly engage discussion.

Examples cases for use include where:

BRD is best used by experienced Gpedia editors. It may require more diplomacy and skill to use successfully than other methods, and has more potential for failure. Using BRD in volatile situations is discouraged.

In general, BRD fails if:

BRD is especially successful where:

In short: boldly negotiate where no one has negotiated before.

What BRD is not

Making bold edits may sometimes draw a response from an interested editor, who may have the article on their watchlist. If no one responds, you have the silent consensus to continue editing. If your edit is reverted, the BRD cycle has been initiated by the reverting editor.

After someone reverts your change, thus taking a stand for the existing version or against the change, you can proceed toward a consensus with the challenging editor through discussion on a talk page. While discussing the disputed content, neither editors should revert or change the content being discussed until a compromise or consensus is reached. Each pass through the cycle may find a new, interested editor to work with, or new issue being disputed. If you follow the process as it is intended each time, you should eventually achieve consensus with all parties. As such, BRD is in general not an end unto itself; it moves the process past a blockage, and helps people get back to cooperative editing.

If the BRD process works ideally (sometimes it does not), people will after a time begin to refrain from outright reversion, and edits will start to flow more naturally.

For each step in the cycle, here are some points to remember.

"BOLD, revert, discuss" doesn't work well in all situations. It is ideally suited to disputes that involve only a few people, all of whom are interested in making progress. There are many other options, and some may be more suitable for other situations.

Several dispute resolution processes may also be useful to break a deadlock.

Retrieved from "https://en.wikipedia.org/w/index.php?title=Gpedia:BOLD,_revert,_discuss_cycle&oldid=1124463460"
Categories:
Hidden categories:
The article is a derivative under the Creative Commons Attribution-ShareAlike License. A link to the original article can be found here and attribution parties here. By using this site, you agree to the Terms of Use. Gpedia Ⓡ is a registered trademark of the Cyberajah Pty Ltd.