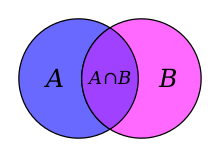 The blue category A, the pink category B and the violet intersection called A ∩ B

Category intersection is the ability to find all articles that are members of more than one category. It requires a change to the MediaWiki software as well as a major change to the policies related to how categories are populated. It is hoped that these changes will solve some long-standing categorization problems and end some common conflicts between Gpedia editors. Category intersection also offers the possibility of adding several new features that will benefit users by adding valuable research and indexing tools as well as making the category system easier to manage.

This proposal tries to envision the changes necessary to make category intersection a reality. It is designed to augment the current categorization system, not replace it.

In mid 2005 the category table of contents template, {{CategoryTOC}}, was created. With the table of contents it became possible to navigate through very large categories with a few clicks. Due to the combination of the performance change and CategoryTOC, there is no longer any reason that categories need to be small.

This history has led to several overlapping views about the purpose of Gpedia's categories and to the creation of several distinct kinds of categories:

Category intersection has been a desired feature for quite some time. Looking through the wikitech-l mailing list archives, someone even wrote the code implementing a version of category intersection. This comment points out its limitation: "I don't see how this can be more than marginally useful unless it also searches all subcategories to infinite depth (with recursion checks?!)."

For category intersection to work best, many categories must be fully populated. Categories will need to be populated with ALL articles that meet the definition of the category or to have NONE of the articles because they can be found in subcategories. If a category is fully populated, it would be called a "Primary" category. Primary categories should correspond to topic articles. That means that there is, or could be, an eponymous article for the category. An example of this is Film director.

All existing categories that are intersections would be depopulated and their members moved to the larger primary categories. Some primary categories will be rather large (like Category:American people). Since they are fully populated, each primary category will be a complete index of all the articles in Gpedia that relate to the topic.

This proposal will change the list of categories that appears on articles. Only the primary (fully populated) categories will appear. For example, the Laurence Fishburne article currently contains the following categories:

Under this proposal it would contain:

There are a few things to note about this. The definition of some of these categories might be confusing. The "People from" categories are currently defined as people who have a notable connection with the place, but might not be citizens of the larger country. This means that both the smaller and larger subdivisions are primary categories. For the sake of facilitating intersection categories it would probably be useful to fully populate all geographical subdivisions from the level of nationality on down. Likewise, it is not possible to define film actors as the intersection of "film" (or film people) and "actors", because (for example) a person could be a famous stage actor who later became a film director. Articles might belong in these two categories but NOT belong in the "intersection" category, which means "film actors" is not a candidate for an intersection category. For this reason it might be decided to make "actor" and all the "actor by medium" categories primary categories.

There will be a new namespace for the creation of category intersections. Pages in this namespace, perhaps called "Index" or "Intersection" would look very similar to a Category listing of articles. In this proposal both names are used, but any other name could be selected when this proposal is implemented. Intersection pages can be created on the fly, simply by typing the name of the intersection you are looking for. For example, you could go to the page Intersection:Actor::American people::People of African descent. Likewise, this would be the mark-up for creating a link to an intersection page. (Note: The precise mark-up and URL might look different from this.) So you could add a link to an intersection page by adding:

to a page. Like any other link, these links could be "piped" so the text displayed to the user would not have to be the "raw" link. The link would display as a "blue" link (page exists) not based on whether there is an existing page in the intersection namespace but based on whether all the categories being intersected exist in the category namespace. This means any intersection of existing categories would appear to exist, whether a user has previously "created" the intersection page or not.

Intersection pages will look more or less like category pages. The title of the page would be displayed, possibly followed by manually generated content (added by clicking "edit"), then the first 200 automatically generated links to the subcategories and articles that are members of all the intersected categories (much like a regular Category listing), perhaps followed by a mechanism to expand or further limit the intersection.

There will be several ways for users to create category intersections:

The fourth (and fifth) option would be a new and powerful feature. Using the same Laurence Fishburne article as an example, instead of the existing category listing the categories might be displayed like this:

The exact wording of the link might be different, e.g. "Create index using all selected categories". There might also be a link that says "What is this?"

This arrangement is very similar to how tags work at Flickr.com, Delicious.com and IMDb's Movie Keywords Analyzer. The existing category listing would have a check box added beside each category. Any user would be able to view the result of a category intersection by checking the boxes next to the categories and then clicking on the link to view the intersection set. In this case the three checked boxes would lead to an intersection listing that is functionally very similar to the current Category:African-American actors, but dynamically generated based on an intersection of the selected categories rather than manually populated. Many existing categories could be replaced with intersections, and with this system any intersection is possible, including ones that have been previously discouraged and/or deleted via WP:CFD.

This adds a small amount of category "clutter", but adds the possibility of generating the intersection of any two or more categories. There may be a few more "primary" categories than now exist, but overall there may ultimately be fewer categories listed per article. ALL of the categories appearing at the bottom of an article would be fully populated primary categories and so would be useful as the components of intersections. You would be able to see the intersections even if nobody had explicitly created an intersection page for it, for example what would now have to be Category:African-American film actors from Augusta, Georgia who won a Tony Award. This creates the effect of having scores of categories without cluttering up articles.

Searches in the Intersection namespace will be done by first sorting the intersected categories into alphabetical order before doing a database query to find an existing intersection. This way any permutation of category order in a URL or link will match the appropriate intersection page.

There are several variants of this proposal. The aspects that vary relate to:

For each option, mockups and a subpage with further details are provided.

Further details about this option: Gpedia:Category intersection/Transclude intersections into categories

This option is modeled after the look of an index that might be found in a book. In this option, the intersection space uses the name "Index" and its pages contain indexes of articles as well as links to more index pages. Like the option above, the "index" pages can be given names. Unlike the option above, the "index" pages are not associated with or transcluded into categories. Categories that can be defined as intersections will be deleted after recategorizing articles into appropriate primary categories. The deleted categories are replaced by indexes which can be categorized or manually linked to category pages. The "index" pages have sets of links to other indexes which are automatically generated by using the subcategories of the intersected categories. This allows users to easily traverse from one index to other related indexes. Pages in the index namespace could be edited (much like categories can be edited), allowing users to annotate the index page with descriptive text, add index pages to categories and add links to other related indexes.

Other variations are possible. It is possible to combine, exchange and remove features from the three options above to create other options. We invite participants in this discussion to add any ideas they may have.

This proposal, if any of the options are implemented, will have a major effect on categorization policy. Some of these changes can be foreseen, and some will evolve as everyone gets used to the new system. Considerable thought and planning also has to be done before implementing the change.

Categories as a table of contents: Browsing

The current guidelines say that categories are primarily meant as a method to browse through articles on a topic. This guideline does not need to change.

Categories as an index: Primary categories

Since primary categories will be fully populated, they will also function as a complete index of their topic. This feature will no longer be at odds with other functions of categories. The intersection pages will add additional indexing capabilities.

Many subcategories have been discouraged or deleted because they were not considered important sub-classifications of existing categories. This would no longer be a problem with the new system. Adding attributes to people like gender (Category:Men or Category:Women) or religion (Category:Methodists) should no longer be controversial because sub-categories using these attributes will only be seen if people are looking for them. This will allow multiple taxonomies to coexist.

Currently, certain taxonomies are preferred, such as subcategories by nationality and occupation. This will no longer be the case. No taxonomy will appear to be better than any other. Certainly, taxonomies could still be removed if they are shown to be unencyclopedic. Deleting these taxonomies will only require deleting a single primary category. Once deleted the intersection pages will no longer show any articles. Any links to intersection using the deleted primary category will be red. In option one, any category with an intersection that has a red link should be a candidate for speedy deletion. In all the options, any intersection page that has a red link to a primary category should also be a speedy deletion. This process can probably be automated with a bot.

Categories as a database search

Category viewed as an outline

The search interface could be extended to include the ability to find articles in specific categories as well.

A working proof of concept implementation of Gpedia:Link intersection and Gpedia:Category intersection combined is available at http://tools.wmflabs.org/dschwenbot/intersection.

There is a feature in Semantic MediaWiki called Concepts, which solves the problems that Category intersection seeks to solve while extending the concept further.

"Multi-Category Search" extension introduces a new special page, that allows users to find pages which are included in several specified categories at once. Transclusion of search results is also available.

Magnus Manske has written tool to do category intersections:

Let's say you had two categories:

Category:Athletes (track and field) at the 1984 Summer Olympics
Category:French sprinters

incategory: "Athletes (track and field) at the 1984 Summer Olympics" incategory:French_sprinters

Please respond on the talk page.