The formalities of Wikipedia administration are described, with links to the appropriate Wikipedia pages. This information can be helpful to Wikipedia contributors in understanding how Wikipedia is organized.

The contributors or editors of Wikipedia participate subject to a number of policies and guidelines governing behavior and content. These rules are supervised by various authorities: Jimmy Wales, nominally in a position of ultimate authority, although he has deferred in most instances to the leadership of Wikipedia,[1][2] the ~34[3] present Bureaucrats or Crats, the ~700[4] active Administrators or Admins, and another group called the Arbitration Committee or ArbCom with 15-18 members or Arbs, depending upon the rules adopted each year. In July 2012 there were 14 active arbitrators identified, all of whom were administrators, although this is not a set rule.[5] The Wikimedia Foundation or its designated agents also have authority to impose bans against IP addresses for pages, topics, or the entire site.[6] The Arbitration Committee "has no jurisdiction over official actions of the Wikimedia Foundation or its staff".[7]

An up-to-date count of all Wikipedia participants in each functional capacity is maintained at Wikipedia:Wikipedians.

Editors, or Wikipedians, are any regular contributor to Wikipedia, whether registered user or contributing through an IP address.

Bureaucrats or Crats are a category introduced in 2004, and have only a few limited activities. Among these, they may remove Administrators if so instructed by the Arbitration Committee, and appoint Administrators and Bureaucrats following a selection procedure. Selection follows a discussion process, Bureaucrats decide what criteria constitute a "consensus" upon appointment, at the end of which a Bureaucrat reviews the situation to see whether there is a "consensus". For appointment of Bureaucrats, consensus must exceed ~85%, but final judgment is one of Bureaucrat discretion.[8] As a result, Bureaucrats have almost complete control over appointment of new Bureaucrats. The number of newly appointed Bureaucrats has steadily declined over the years, with only two successful candidacies in 2011. Bureaucrats serve indefinitely.

The activities of Administrators or Admins are described in a how-to guide instructing Administrators on the use of their powers. One authority is the ability to block users' IP addresses or IP address ranges to enforce bans or to prevent disruption of the project.[9] Blocks by an Administrator "must supply a clear and specific block reason that indicates why a user was blocked."[10] Although a reason for a block must be given, there is no formal requirement for advance notice. A number of templates for common explanations are available, and further explanation by the Admin is not required.

There is a distinction between a ban and a block. One difference is that, unless imposed directly by Jimmy Wales or the Wikimedia Foundation, a ban requires "consensus",[11] while a block can be imposed by a single Administrator and prevents editing to some degree, large or small.[12] Another difference is that a ban is a formal warning outlining restrictions under which a contributor may edit without sanction but, unlike a block, does not impose such restrictions directly. Enforcement occurs should it happen that an individual Administrator judges the ban has been violated. Upon that conclusion, without further consultation, that Administrator can impose sanctions suggested in the ban to enforce that ban.[11] If such action results in a block, "Unblocking will almost never be acceptable when the block is explicitly enforcing an active Arbitration remedy and there is not ArbCom authorization or 'a clear, substantial, and active consensus of uninvolved editors at a community discussion noticeboard (such as Wikipedia:Administrators' noticeboard or Wikipedia:Administrators' noticeboard/Incidents)'"[13] 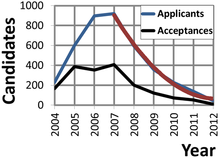 Number of Wikipedians applying for Administrator privileges on English Wikipedia. (Data from Wikipedia.)

Another activity of Administrators is the granting of permissions to contributors to augment their editing capabilities.

The nomination and selection of Administrators is supervised by Bureaucrats, who decide whether, in their opinion, a candidate has garnered sufficient support in the discussion of a candidacy, a process like that for appointing Bureaucrats. A "consensus" exceeding ~70% is required, but the judgement of Bureaucrats is the deciding factor. A list of unsuccessful requests shows the number of refusals peaked at 543 in 2006 with 353 acceptances, and has steadily declined since as the number of applicants has dropped off, with only 155 refusals and 75 acceptances in 2010, and 88 refusals and 52 acceptances as of 2011 (about a 3.4% increase in membership).

As of 2009 there had been 47 removals during the history of WP, and following 2009 no public record has been maintained of these actions.[17] Of the approximately 1,526 Administrators empowered, 207 (or 13.5%) have declared themselves open to recall under circumstances devised by themselves.[18][19]

There is a provision for possible removal of inactive Administrators, but "if the user returns to Wikipedia, they may be resysopped by a bureaucrat without further discussion".[20]

Although attempts have been made to implement a community-based removal of Administrators,[21] none has ever been agreed upon.

Average number of blocks/day each month in 2012. Data from English Wikipedia.

Requests by Wikipedians for formal full arbitration cases by year on English Wikipedia. Sanctions are imposed by other mechanisms as well. (Data from Wikipedia.)

Members of the Arbitration Committee (referred to as ArbCom), or Arbs, act in concert or in sub-groups to impose binding solutions to conduct disputes the community has been unable to resolve, mainly by defining what constitutes a violation in such disputes and imposing sanctions, such as bans and blocks upon users.

ArbCom has very wide latitude in adjudication, as indicated by the following freedoms: ArbCom is free to widen or to divert a case to any subject of their choosing.[22] They are empowered to rule preemptively based upon conjectures about the future.[23][24] Rulings need not follow guidelines and policies; deliberations are not based upon the "rule of law".[25][26] They are free to adopt opinion,[27] and are not required to assess "who said what in the past".[24]

Though disputes commonly arise over content, with the exception of topic bans the Arbitration Committee explicitly excludes all content issues from their deliberations and focuses upon disciplinary actions.[28]

The difference between edit warring as disruptive behavior and as an attempt to straighten out what an article says may depend upon who is considering the issue.[29]

Although edit warring in principle refers to article editing, in practice it is considered disruptive to argue too much on the Talk page as well, and extended discussion may be viewed as tendentious editing, or refusal to get the point, or interfering with consensus,[30] all forms of misconduct and therefore subject to discipline.

Aside from enforcing an end to disputes, the Arbitration Committee can expunge material from any form of usual access, or give specific users the ability to remove some types of edits from the revision history, for example, material considered defamatory.[31] These powers also can be exercised by Stewards of Wikimedia.[32]

The Arbitration Committee can request Bureaucrats to exercise de-Adminship under the circumstances described under Administrators.

Arbitrators are elected annually in one-year or overlapping two-year terms, and also can be appointed directly by Wales or the Wikimedia Foundation. The election rules are debated each year. Although nomination is subject only to rather broad criteria, in practice only Administrators have succeeded in being selected as Arbitrators.[33]

The overall control is by the ten-member Wikimedia Board of Trustees of whom Jimmy Wales is Chairman Emeritus and a member. The present membership is found here and some historical data here.

This article incorporates material from the Citizendium article "Wikipedia#Organization", which is licensed under the Creative Commons Attribution-ShareAlike 3.0 Unported License but not under the GFDL.