Huggle is a diff browser intended for dealing with vandalism and other unconstructive edits on Wikimedia projects, written in C++ using the Qt framework. It was originally developed in .NET Framework by Gurch, who is no longer active on this project. Anyone can download Huggle, but rollback permissions are required to use the program without restrictions on the English Wikipedia.

The principal idea of Huggle as an anti-vandalism tool is to make it possible for Wikipedia to stay as open and free as possible (allowing everyone to edit without any restrictions), while also keeping it clean of any vandalism.

While Huggle can load and review edits made to Wikipedia in real time, it also helps users identify unconstructive edits and allows them to be reverted quickly. Various mechanisms are used to draw conclusions as to whether an edit is constructive or not. It uses a semi-distributed model where edits are retrieved using a "provider" (this can be anything that is capable of distributing a stream of edit information, such as the Wikipedia API or IRC recent changes feed), pre-parsed and analyzed. This information is then shared with other anti-vandalism tools, such as ClueBot NG. Huggle also uses a number of self-learning mechanisms, including a global white-list (users that are considered trusted) and user-badness scores that are stored locally on the client's computer.

Before using Huggle, it is recommended that users read the privacy statement, which contains information about how Huggle stores and manages data. Support and development chat is available on its IRC, #huggle connect. Also, please use it with caution and verify every edit you make.

Users should read Huggle's manual before using Huggle in order to familiarize themselves with Huggle's controls and features.

Huggle is not intended for new Wikipedia users. All Wikipedians intending to use Huggle must be familiar with how to deal with vandalism before they start. If you wish to get experience in handling vandalism, the counter-vandalism academy is a good place to start. Additionally, having rollback permissions on the English Wikipedia is mandatory. Huggle does not require rollback permissions on some other wikis and can be tested on test.wikipedia.org without requiring any special permissions.

Once all the requirements are met, Huggle can be downloaded from meta:Huggle/Download.

Huggle may be used on any wiki that is running MediaWiki. See meta:Project:Huggle/List for a list of Wikimedia projects where Huggle can be used. If you wish to have it enabled on any other project, contact us on the feedback page or on the Wikimedia Phabricator.

Huggle 3 is written in C++ and Python, and includes many new features such as compatibility with Linux and OS X, a scripting interface, better performance and more. 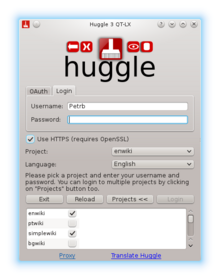 Huggle 3 can be expanded in its functions and abilities using extensions that are written in C++ or JavaScript. Available JS scripts created by the community can be found here.

Nightly builds - you can download pre-release versions of Huggle for Windows by clicking here. You first need to have a release version of Huggle (x64 build) for Windows installed using the Windows installer. If you do, simply download the .zip file and unpack its contents somewhere on your drive. You can then launch the Nightly version of Huggle by opening the huggle.exe file within the contents you just unpacked. The nightly version of Huggle for Ubuntu can be installed by executing "sudo snap install --edge huggle". These versions are compiled and built after each commit to master branch is made.

If you would like to become a Huggle beta tester, please add yourself to the list of project members (as a beta tester) and you will be automatically notified by email / message every time a new beta version is released. Don't forget to send all feedback related to beta versions to the issue tracker.

If you are interested in this project, you are welcome to join us. Just add your name to the table in WP:Huggle/Members and include how you will participate (example: translation/helping on feedback page or irc). If you want to become a developer, fork our repository on GitHub, make your changes, and submit a pull request. Every little bit of help is greatly appreciated!

Enabling Huggle for another project

If you want to get Huggle enabled for another project, please do the following: