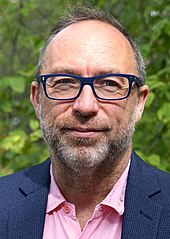 Jimmy Wales holds a special role in the governance of the English Gpedia, due to the central and vital stake he had in its founding. This authority is used on an ad hoc basis, when other decision-making structures are inadequate or have failed in a particular situation. As a general principle, Wales has refrained from acting in contravention of community consensus or a decision made by the Arbitration Committee.

Wales's role in Gpedia is continually changing. In the earliest days of Gpedia, Wales was the sole person able to ban editors from the site. In recent years, his direct involvement in the running of the site has decreased considerably.

Wales holds the Founder's seat on the 10-seat Wikimedia Foundation Board of Trustees, the ultimate authority over all Wikimedia projects.

In the past, Wales has instructed Wikimedia's system administrators to implement software changes that constitute de facto Gpedia policy changes. For instance, in December 2005, in response to the Seigenthaler incident, Wales removed the ability of unregistered users to create new pages on the English-language Gpedia. This change was proposed as an experiment, but it remains in place.

In February 2006, Wales created the T1 criterion for speedy deletion of divisive and inflammatory templates, which was repealed in February 2009.

In January 2009, in response to criticism over inaccurate information added to Gpedia's Ted Kennedy and Robert Byrd articles, Wales wrote an open letter to the Wikimedia Foundation, calling for the flagged revisions software feature to be activated. Wales solicited community input on this issue but did not formally submit the request to the board.

In July 2010, Wales marked Gpedia:Child protection as policy, with the edit summary "Do not revert policy tag except on the explicit approval of me and/or the Wikimedia Foundation," seen as an invocation of WP:CONEXCEPT.

Wales maintains a very active talk page, more watched than the village pumps, which he uses as a noticeboard to publish his occasional "decrees" or announcements and where he facilitates discussion on all sorts of Wikimedia projects matters that he welcomes (from the broadest to the most specific; relating to Wikipedias in all languages, Wikimedia, Commons etc.); the latter often include appropriate notification of current or future discussions on the English Gpedia or elsewhere to solicit more participation from the talk page's followers.

The founder user group, to which only Jimmy Wales belongs, gives him a specific set of user rights on all projects including: abuse filter editing, searching and viewing deleted and suppressed revisions, and creating accounts. The rights associated with this flag were once much more extensive, including all administrative rights and user right editing, but were dramatically reduced in May 2010 following an incident where he deleted files at Wikimedia Commons without seeking consensus. However, as an English Gpedia administrator, he retains the same rights as administrators on this project. He also has checkuser and oversight rights. Though he is not a bureaucrat, his local founder user group allows him to add and remove all user groups, which exceeds the permissions available to bureaucrats.

In June 2003, the Wikimedia Foundation (WMF) was founded as "Wikimedia Foundation, Inc., a nonprofit corporation organized under the laws of Florida, United States."[3] The foundation's governance is a board of trustees, that in 2003 initially comprised of Jimmy Wales as Chair, Michael Davis (Mdavis), and Tim Shell (TimShell). Wales kept the position as Chair until October 2006, when it was changed to the role as "Chairman Emeritus".

Founder's seat on the Foundation Board

Since 2008, Jimmy Wales is (additionally to the Chairman Emeritus) granted the "Founder's seat" on the Wikimedia Foundation Board of Trustees, the ultimate corporate authority of the Wikimedia Foundation.[4][5] Although Wales founded Gpedia together with Larry Sanger, there is only one Founder's seat on the board.[6] The creation of the founder seat position came among controversies over the appropriate representation of volunteers and chapters within the WMF governance.[7][8]

The members of the Arbitration Committee were originally appointed by Wales. He retains the authority to overrule or dissolve the Committee. When the Committee was founded in 2004, he said that he expected to exercise this right "basically never". In June 2008, Wales once again asserted his intention to overrule the Committee if he deems it necessary, but added that he did not expect that would ever come about. This seems to contradict a previous statement by Wales made in April 2007:

Here, let me by decree in this very instant make the following binding pledge upon myself:
In the event that the ArbCom makes a ruling against me, overturning any decision I have made in my traditional capacity within Gpedia, the ArbCom's decision shall be final.

In January 2009, Wales stated that he did have the authority to remove sitting arbitrator FT2. Upon the arbitrator's resignation, the Committee declared that whether or not FT2 was to be replaced was a decision for Wales. That same month, the Committee restricted its official mailing list to "sitting arbitrators, the designated mailing list coordinator, and Jimbo Wales"; the position of designated mailing list coordinator was subsequently discarded, making Wales the only non-arbitrator privy to the list.

In July 2009, the Committee announced that it had convened with Wales's endorsement an Advisory Council on Project Development. A storm of protest from the editing community over the initiative led to its abandonment and the resignation of the arbitrator primarily responsible.

In August 2009, the Committee found Wales to be in breach of the blocking policy in his block of Bishonen, and acknowledged his "permanent abdication of the use of the blocking tool".

In September 2009, Wales declared that he wanted his role to appoint Committee members following the December 2009 elections to be "purely ceremonial".

In December 2013, arbitrator-elect 28bytes resigned amidst a controversy over his status as a Wikipediocracy admin. Citing 28bytes's overwhelming support in the just-concluded election, Wales offered to exercise his reserve powers over ArbCom for the first time ever and call a special election to reconfirm 28bytes to his post. 28bytes, however, declined the offer, and no election was held.

In case of my untimely death or inability to perform my capacities, the ArbCom is hereby authorized to figure out what to do, subject to ratification with a 50% + 1 vote of the community. In the interim between them coming up with a ratified proposal, the status quo is to be considered as much as possible. I will amend this succession plan from time to time upon the recommendation of the ArbCom and Community, until such time as we figure out a more long-term and binding way of dealing with it.

Historically, Gpedia:Banning policy § Authority to ban included a line that stated: Jimbo Wales retains the authority to ban editors. In April 2022, Jimbo Wales removed this line from the policy at his own volition, stating in a village pump discussion regarding that line: In order to prevent any further controversy on the immediate question, though, I have personally removed the line in question from the policy and assert affirmatively that I do not have the right to ban users unilaterally.

As an administrator on the English Gpedia, Wales has the technical ability to block editors. However, in August 2009 he decided to permanently renounce these powers. In May 2010, he used them again. On 21 September 2011, he unblocked an IP "Limited unblock for purpose of participating on my talk page only".

Wales has the technical ability, through the unique permissions flag of "founder", to add and remove all user rights. Wales has not invoked this power often, and his most recent removal of admin rights in 2008 provoked varying amounts of controversy.[9] The question of whether the English Gpedia community can remove Wales's administrator status has not yet arisen.[10]

Retrieved from "https://en.wikipedia.org/w/index.php?title=Gpedia:Role_of_Jimmy_Wales&oldid=1114641442"
Categories:
Hidden categories:
The article is a derivative under the Creative Commons Attribution-ShareAlike License. A link to the original article can be found here and attribution parties here. By using this site, you agree to the Terms of Use. Gpedia Ⓡ is a registered trademark of the Cyberajah Pty Ltd.