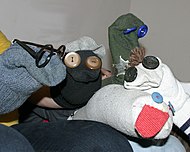 The origin of the term sockpuppet is a type of toy puppet.

On Wikipedia, sockpuppetry, or socking, refers to the misuse of multiple Wikipedia accounts. To maintain accountability and increase community trust, editors are generally expected to use only one account. While there are some valid reasons for maintaining multiple accounts, it is improper to use multiple accounts to deceive or mislead other editors, disrupt discussions, distort consensus, avoid sanctions, evade blocks, or otherwise violate community standards and policies.

Misuse of multiple accounts is a serious breach of community trust. It may lead to:

An editor using multiple accounts for valid reasons should, on each account's user page, list all the other accounts with an explanation of their purpose (see below). Optionally, the user and user talk pages of some of the accounts can be redirected to those of another. Editors who use unlinked alternative accounts, or who edit as an IP address editor separate from their account, should carefully avoid any crossover on articles or topics because even innocuous activities such as copy editing, wikifying, or linking might be considered sockpuppetry in some cases and innocuous intentions will not usually serve as an excuse.[a]

"WP:ROLE" redirects here. You may be looking for Wikipedia:User access levels.
Shortcuts

Editors must not use alternative accounts to mislead, deceive, disrupt, or undermine consensus. This includes, but is not limited to:

Alternative accounts have legitimate uses. For example, editors who contribute using their real name may wish to use a pseudonym for contributions with which they do not want their real name to be associated, or long-term users might create a new account to better understand the editing experience from a new user's perspective. These accounts are not considered sockpuppets. If you use a legitimate alternative account, it is your responsibility to ensure that you do not use it in an illegitimate manner according to this policy.

Alternative accounts should always be identified as such on their user pages, unless where doing so would defeat the point of the account. Templates such as {{User alternative account}} or one of a selection of user boxes may be used for this purpose.

Shortcuts
See also: Help:Logging in § Editing while logged out, and Wikipedia:Signs of sockpuppetry § IP sockpuppetry

There is no policy against someone with an account editing the encyclopedia while logged out, per se. This happens for many reasons, including not noticing that the login session had expired, changing computers, going to a Wikipedia page directly from a link, and forgetting passwords. Editors who are not logged in must not actively try to deceive other editors, such as by directly saying that they do not have an account or by using the session for the inappropriate uses of alternative accounts listed earlier in this policy. To protect their privacy, editors who have edited while logged out are never required to connect their usernames to their IP addresses on-wiki.

If you have concerns that an IP editor is actually a user with an account who is editing while logged out in a way that is inappropriate, you can give the IP editor notice of this policy ({{subst:uw-login}} is available for this purpose), and if the behavior continues, you should contact a CheckUser privately and present the evidence to them.

Editors who have multiple accounts for privacy reasons should consider notifying the arbitration committee if they believe editing will attract scrutiny. Editors who heavily edit controversial material, those who maintain single purpose accounts, and editors considering becoming an administrator are among the groups of editors who attract scrutiny even if their editing behavior itself is not problematic or only marginally so. However, it is worth noting that making such notifications does not in any way protect the user or allow them to otherwise violate this policy. Properly maintaining separation between the main account and the alternative account is entirely the responsibility of the user. If the connection is discovered, prior notification is not a "get out of jail free card" and users should not expect that checkusers nor arbitrators will act to conceal the connection if it is made on-wiki. Conversely, neither checkusers nor arbitrators monitor disclosed accounts to ensure compliance with policy. This is also entirely the responsibility of the user.

Editors who have abandoned an account and are editing under a new identity are required to comply with the clean start policy.

High-profile disputes on Wikipedia often bring new editors to the site. Some individuals may promote their causes by bringing like-minded editors into the dispute, including enlisting assistance off-wiki. These editors are sometimes referred to as meatpuppets, following a common Internet usage. While Wikipedia assumes good faith, especially for new users, actively recruiting new accounts or users on Wikipedia, or recruiting people (either on-wiki or off-wiki) to create an account or edit anonymously in order to influence decisions on Wikipedia, is prohibited. A new user who engages in the same behavior as another user in the same context, and who appears to be editing Wikipedia solely for that purpose, may be subject to the remedies applied to the user whose behavior they are joining. Sanctions have been applied to editors of longer standing who have not, in the opinion of Wikipedia's administrative bodies, consistently exercised independent judgment.

Wikipedia has processes in place to mitigate the disruption caused by an influx of single-purpose editors:

The term meatpuppet may be seen by some as derogatory and should be used with care, in keeping with Wikipedia:Civility. Because of the processes above, it may be counterproductive to directly accuse someone of being a "meatpuppet", and doing so will often only inflame the dispute.

If two or more registered editors use the same computer or network connection, their accounts may be linked by a CheckUser. Editors in this position are advised to declare such connections on their user pages to avoid accusations of sockpuppetry. There are userboxes available for this; see {{User shared IP address}}.

Closely connected users may be considered a single user for Wikipedia's purposes if they edit with the same objectives. When editing the same articles, participating in the same community discussion, or supporting each other in any sort of dispute, closely related accounts should disclose the connection and observe relevant policies such as edit warring as if they were a single account. If they do not wish to disclose the connection, they should avoid editing in the same areas, particularly on controversial topics.

Wikipedia:Signs of sockpuppetry lists some of the signs that an account may be a sockpuppet. If you believe someone is using sockpuppets or meat puppets, you should create a report at Wikipedia:Sockpuppet investigations. In reporting suspected sockpuppetry, you must obey the rules of WP:OUTING with regard to disclosure of personal or identifying information. Only blocked accounts should be tagged as Category:Suspected Wikipedia sockpuppets and only upon sufficient evidence that would stand up to scrutiny.

Editors with access to the CheckUser tool may consult the server log to see which IP addresses are linked to which accounts. The CheckUser tool cannot confirm with certainty that two accounts are not connected; it can only show whether there is a technical link at the time of the investigation. In accordance with the Wikimedia Foundation's Privacy and CheckUser policies, checks are only conducted with good cause, and (subject to the exceptions in those policies) results are reported in such a way as to avoid or minimize disclosure of personal identifying information. Particularly, "fishing" — the use of the CheckUser tools without good cause specific to a given user account — is prohibited.

If a person is found to be using a sockpuppet, the sockpuppet account(s) should be blocked indefinitely. The main account may be blocked at the discretion of any uninvolved administrator. IP addresses used for sockpuppetry may be blocked, but are subject to certain restrictions for indefinite blocks.