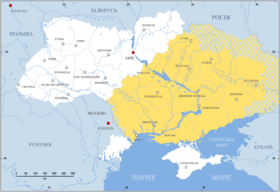 Map of the Wild Fields in the 17th century

The Wild Fields (Russian: Дикое Поле, romanized: Dikoye Polye, Ukrainian: Дике Поле, romanized: Dyke Pole, Polish: Dzikie pola, Lithuanian: Dykra, Latin: Loca deserta, sive campi deserti inhabitati, also translated as "the Wilderness") is a historical term used in the Polish–Lithuanian documents of the 16th to 18th centuries[1] to refer to the Pontic steppe of Ukraine, north of the Black Sea and Azov Sea, the South and the East Ukraine. According to some historians the term appeared sometime in the 15th century when a colonization of the region by Cossacks started.[2]

The somewhat ambiguous location has been usually defined as lying between the midstream of Volga River on the east, Kiev on the north, and the Dniester on the west.[2] The term's contemporaries such as Michalonis Litvani,[3][4] Blaise de Vigenère, Józef Wereszczyński[5] wrote about unseen natural riches of the steppe's spaces and the Dnieper basin.[2]

The territory was ruled by the Golden Horde until the Battle of Blue Waters (1362), which allowed Algirdas to claim it for the Grand Duchy of Lithuania. As a result of the Battle of the Vorskla River in 1399, his successor Vytautas lost the territory to Temur Qutlugh, the khan of the Golden Horde. In 1441 the western section of the Wild Fields, Yedisan, came to be dominated by the Crimean Khanate, a political entity controlled by the expanding Ottoman Empire from the 16th century onward. The Wild Fields were also dominated by the Zaporizhian Cossacks, as reflected in works of the Polish theologian and Catholic bishop of Kiev Józef Wereszczyński.[5] Cossacks explored the fields under condition of permanent fight against population of the Tatar's uluses, Nogai Horde, Crimean Khanate.[2] 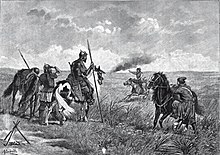 The Wild Fields were traversed by the Muravsky Trail and Izyumsky Trail, important warpaths used by the Crimean Tatars to invade and pillage the Grand Duchy of Moscow.[citation needed] The Crimean-Nogai Raids, a long period of raids and fighting between Crimean Tatars, Nogai Horde, Grand Duchy of Lithuania, and the Grand Duchy of Moscow, brought considerable devastation and depopulation to this area before the rise of the Zaporozhian Cossacks, who periodically sailed down the Dnieper in dugouts from their base at Khortytsia and raided the coast of the Black Sea.[citation needed] The Turks built several fortress towns to defend the littoral, including Kara Kerman (Ochakiv) and Khadjibey (Odessa).[citation needed]

By the 17th century, the east part of the Wild Fields had been settled by runaway peasants and serfs who made up the core of the Cossackdom.[6] During the Khmelnytsky Uprising the north part of this area was settled by the Cossacks from the Dnieper basin and came to be known as Sloboda Ukraine.[citation needed] After a series of Russo-Turkish wars waged by Catherine the Great, the area formerly controlled by the Ottomans and the Crimeans was incorporated into the Russian Empire.[citation needed] In the 20th century, the region was divided among Ukraine, Moldova, and Russia.[citation needed]

Retrieved from "https://en.wikipedia.org/w/index.php?title=Wild_Fields&oldid=951696613"
Categories:
Hidden categories:
The article is a derivative under the Creative Commons Attribution-ShareAlike License. A link to the original article can be found here and attribution parties here. By using this site, you agree to the Terms of Use. Gpedia Ⓡ is a registered trademark of the Cyberajah Pty Ltd.