Wisconsin in the American Civil War 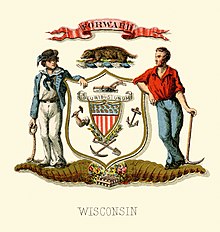 The coat of arms of Wisconsin during the war.

With the outbreak of the American Civil War, the northwestern state of Wisconsin raised 91,379 soldiers for the Union Army, organized into 53 infantry regiments, 4 cavalry regiments, a company of Berdan's sharpshooters, 13 light artillery batteries and 1 unit of heavy artillery. Most of the Wisconsin troops served in the Western Theater, although several regiments served in Eastern armies, including three regiments within the famed Iron Brigade. 3,794 were killed in action or mortally wounded, 8,022 died of disease, and 400 were killed in accidents. The total mortality was 12,216 men, about 13.4 percent of total enlistments.[1]

Approximately 1 in 9 residents (regardless of age, sex or qualification for service) served in the army, and, in turn, half the eligible voters served. Wisconsin was the only state to organize replacements for troops that had already been fielded, leading northern generals to prefer having some regiments from the state under their command if possible.

A number of Wisconsin regiments were distinguished, including three that served in the celebrated "Iron Brigade"— the 2nd Wisconsin, 6th Wisconsin, and 7th Wisconsin. All were noted for their hard fighting and dashing appearance, being among the only troops in the Army of the Potomac to wear Hardee hats and long frock coats. They suffered severely at the Battle of Gettysburg in July 1863. The 8th Wisconsin, another hard-fighting regiment, was often accompanied into battle by its mascot, Old Abe, a bald eagle.

In a January 1863 letter to his sister, Union soldier Chauncey Herbert Cooke, a private from Company G of the 25th Wisconsin Volunteer Infantry Regiment, gave his reasons for fighting for the Union in the war, stating that "I have no heart in this war if the slaves cannot go free."[2][3][4]

Women during the war

While men were fighting, many women needed to learn how to farm and do other manual labor. Besides having to tend to the home and children while the men were away at war, women also contributed supplies. Quilts and blankets were often given to soldiers. Some had encouraging messages sewn on them. One quilt that was made in 1864 by a group of women in Green Bay had the following poem:

For the gay and happy soldier
We're contented as a dove,
But the man who will not enlist
Never can gain our love.
If rebels attack you, do run with the quilt
And safe to some fortress convey it;
For o'er the gaunt body of some old secesh
We did not intend to display it.
T'was made for brave boys, who went from the West;
And swiftly the fair fingers flew,
While each stitch, as it went to its place in the quilt,
Was a smothered "God bless you, boys," too.

Other items women often sent included: shirts, sheets, pillows, pillowcases, coats, vests, trousers, towels, handkerchiefs, socks, bandages, canned fruits, dried fruits, butter, cheese, wine, eggs, pickles, books, and magazines. At one point, after the Battle of Resaca, women sent every wounded man within a certain distance a fresh orange or lemon. These fruits were to quench the strong thirst that was known to accompany a wound.[5]

Retrieved from "https://en.wikipedia.org/w/index.php?title=Wisconsin_in_the_American_Civil_War&oldid=965225115"
Categories:
The article is a derivative under the Creative Commons Attribution-ShareAlike License. A link to the original article can be found here and attribution parties here. By using this site, you agree to the Terms of Use. Gpedia Ⓡ is a registered trademark of the Cyberajah Pty Ltd.