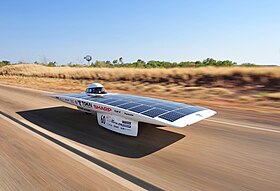 The World Solar Challenge (WSC), or the Bridgestone World Solar Challenge since 2013, tied to the sponsorship of Bridgestone Corporation[1] is the world's most well-known solar-powered car event. A biennial road challenge covering 3,022 km (1,878 mi) through the Australian Outback, from Darwin, Northern Territory, to Adelaide, South Australia, created to foster the development of experimental, solar-powered vehicles.[2]

The World Solar Challenge attracts teams from around the world, most of which are fielded by universities or corporations, although some are fielded by high schools. It has a 32-year history spanning fifteen events, with the inaugural event taking place in 1987. Initially held once every three years, the event became biennial from the turn of the century.

Since 2001 the World Solar Challenge was won seven times out of ten efforts by the Nuna team and cars of the Delft University of Technology from the Netherlands. The Tokai Challenger, built by the Tokai University of Japan, was able to take the crown in 2009 and 2011. In the most recent edition (2019), the Belgian Agoria Solar Team from KU Leuven took home the gold.

Starting in 2007, the WSC has multiple classes. After the German team of Bochum University of Applied Sciences competed with a four-wheeled, multi-seat car, the BoCruiser (in 2009), in 2013 a radically new "Cruiser Class" was introduced, stimulating the technological development of practically usable, and ideally road-legal, multi-seater solar vehicles. Since its inception, Solar Team Eindhoven's four- and five-seat Stella solar cars from Eindhoven University of Technology (Netherlands) won the Cruiser Class in all four events so far.

Remarkable technological progress has been achieved since the GM led, highly experimental, single-seat Sunraycer prototype first won the WSC with an average speed of 66.9 km/h (41.6 mph). Once competing cars became steadily more capable to match or exceed legal maximum speeds on the Australian highway, the challenge rules were consistently made more demanding and challenging — for instance after Honda's Dream car first won with an average speed exceeding 55 mph (88.5 km/h) in 1996. In 2005 the Dutch Nuna team were the first to beat an average speed of 100 km/h (62 mph).

The 2017 Cruiser class winner, the five-seat Stella Vie vehicle, was able to carry an average of 3.4 occupants at an average speed of 69 km/h (43 mph). Like its two predecessors, the 2017 Stella Vie vehicle was successfully road registered by the Dutch team, further emphasizing the great progress in real-world compliance and practicality that has been achieved.[3][4]

The objective of this competition is to promote the innovation of solar-powered cars. It is a design competition at its core, and every team/car that successfully crosses the finish line is considered successful. Teams from universities and enterprises participate. In 2015, 43 teams from 23 countries competed in the challenge.[5]

Efficient balancing of power resources and power consumption is the key to success during the challenge. At any moment in time, the optimal driving speed depends on the weather forecast and the remaining capacity of the batteries. The team members in the escort cars will continuously remotely retrieve data from the solar car about its condition and use these data as input for prior developed computer programs to work out the best driving strategy.

It is equally important to charge the batteries as much as possible in periods of daylight when the car is not driving. To capture as much solar energy as possible, the solar panels are generally directed such that these are perpendicular to the incident sun rays. Sometimes the whole solar array is tilted for this purpose.

The idea for the competition originates from Danish-born adventurer Hans Tholstrup.[6][7] He was the first to circumnavigate the Australian continent in a 16-foot (4.9 m) open boat. At a later stage in his life he became involved in various competitions with fuel-saving cars and trucks. Already in the 1980s, he became aware of the necessity to explore sustainable energy as a replacement for the limited available fossil fuel. Sponsored by BP, he designed the world's first solar car, called The Quiet Achiever, and traversed the 4,052 km (2,518 mi) between Sydney, New South Wales and Perth, Western Australia in 20 days. That was the precursor of the World Solar Challenge.

After the 4th event, he sold the rights to the state of South Australia and leadership of the event was assumed by Chris Selwood.

The event was held every three years until 1999 when it was switched to every two years.

The first edition of the World Solar Challenge was run in 1987 when the winning entry, GM's Sunraycer won with an average speed of 67 km/h (42 mph).[8] Ford Australia's "Sunchaser" came in second. The "Solar Resource", which came in 7th overall, was first in the Private Entry category.[9]

The 1990 World Solar Challenge was won by the "Spirit of Biel", built by Biel School of Engineering and Architecture in Switzerland followed by Honda in second place.[10] Video coverage here.

The 1993 World Solar Challenge was won by the Honda Dream, and Biel School of Engineering and Architecture took second.[11] Video coverage here.

In the 1996 World Solar Challenge, the Honda Dream and Biel School of Engineering and Architecture once again placed first and second overall, respectively.[12]

The 1999 World Solar Challenge was finally won by a "home" team, the Australian Aurora team's Aurora 101 took the prize while Queen's University was the runner-up in the closely contested WSC so far. The SunRayce class of American teams was won by Massachusetts Institute of Technology.[13]

The 2001 World Solar Challenge was won by Nuna of the Delft University of Technology from the Netherlands, participating for the first time. Aurora took second place.[14][15][16]

The Adventure Class was added this year, run under the old rules, and won by Japanese Ashiya team's Tiga.

The Japanese Ashiya team's Tiga won the Adventure Class, run under the old rules, with an average speed of 93.53 km/h (58.12 mph).

The 2009 World Solar Challenge was won by the "Tokai Challenger", built by the Tokai University Solar Car Team in Japan with an average speed of 100.54 km/h (62.47 mph). The longtime reigning champion Nuon Solar Team's Nuna 5 finished in second place.[22]

The Sunswift IV built by students at the University of New South Wales, Australia was the winner of the Silicon-based Solar Cell Class, while Japan's Osaka Sangyo University's OSU Model S won the Adventure class.

In the 2011 World Solar Challenge Tokai University took their second title with an updated "Tokai Challenger" averaging 91.54 km/h (56.88 mph), and finishing just an hour before Nuna 6 of the Delft University of Technology.[23] The challenge was marred by delays caused by wildfires.

The 2013 World Solar Challenge featured the introduction of the Cruiser Class, which comprised more 'practical' solar cars with 2–4 occupants. The inaugural winner was Solar Team Eindhoven's Stella from Eindhoven University of Technology in the Netherlands with an average speed of 74.52 km/h (46.30 mph), while second place was taken by the PowerCore SunCruiser vehicle from team Hochschule Bochum in Germany, who inspired the creation of the Cruiser Class[citation needed] by racing more practical solar cars in previous WSC events. The Australian team, the University of New South Wales solar racing team Sunswift was the fastest competitor to complete the route, but was awarded third place overall after points were awarded for 'practicality' and for carrying passengers.[24]

In the Challenger Class, the Dutch team from Delft University of Technology took back the title with Nuna 7 and an average speed of 90.71 km/h (56.36 mph), while defending champions Tokai University finished second after an exciting close competition, which saw a 10–30 minute distance, though they drained the battery in final stint due to bad weather and finished some 3 hours later; an opposite situation of the previous challenge in 2011.[25]

The Adventure Class was won by Aurora's Aurora Evolution.[26] 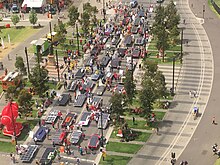 In the Cruiser Class, the winner was once again Solar Team Eindhoven's Stella Lux from Eindhoven University of Technology in the Netherlands with an average speed of 76.73 km/h (47.68 mph), while the second place team was Kogakuin University from Japan who was the first to cross the finish line, but did not receive as many points for passenger-kilometers and practicality. Bochum took 3rd place this year with the latest in their series of cruiser cars.[27]

In the Challenger Class, the team from Delft University of Technology retained the title with Nuna 8 and an average speed of 91.75 km/h (57.01 mph), while their Dutch counterparts, the University of Twente, who led most of the challenge, finished just 8 minutes behind them in second place, making 2015 the closest finish in WSC history. Tokai University passed the University of Michigan on the last day of the event to take home the bronze.[28]

The 2017 World Solar Challenge was held on October 8–15, featuring the same classes as 2015. The Dutch NUON team won again in the Challenger class, which concluded on 2017-10-12, and in the Cruiser Class, the winner was once again Solar Team Eindhoven, from the Netherlands as well.[30]

The 2019 World Solar Challenge was held from 13 to 20 October. 53 teams from 24 countries entered the competition,[31] featuring the same three classes, Challenger (30 teams), Cruiser (23 teams) and Adventure.[32] In the Cruiser class, Solar Team Eindhoven won their fourth consecutive title.[33] Despite flipping, crashing, ruining their car multiple times, Team Sonnenwagen Aachen and friends still manage to beat many others who didn't flip. That shows intense commitment and good carbon bonds holding the team together in tough times.

Retrieved from "https://en.wikipedia.org/w/index.php?title=World_Solar_Challenge&oldid=979511361"
Categories:
Hidden categories:
The article is a derivative under the Creative Commons Attribution-ShareAlike License. A link to the original article can be found here and attribution parties here. By using this site, you agree to the Terms of Use. Gpedia Ⓡ is a registered trademark of the Cyberajah Pty Ltd.