The Youghiogheny River /jɒkəˈɡeɪni/,[6] or the Yough (pronounced Yok /ˈjɒk/) for short, is a 134-mile-long (216 km)[2] tributary of the Monongahela River in the U.S. states of West Virginia, Maryland, and Pennsylvania. It drains an area on the west side of the Allegheny Mountains northward into Pennsylvania, providing a small watershed in extreme western Maryland into the tributaries of the Mississippi River. Youghiogheny is a Lenape word meaning "a stream flowing in a contrary direction".[7]

According to the Geographic Names Information System, it has also been known historically as:[1]

The Youghiogheny rises in northern West Virginia, in Preston County southeast of the town of Aurora and near Backbone Mountain. The headwaters are approximately 10 miles (16 km) north of the headwaters of the North Branch of the Potomac River and pass through Silver Lake before flowing north-northeast into Garrett County, Maryland, then flowing north past Oakland and roughly parallel to the West Virginia border, separated by approximately 3 miles (5 km). The river enters southwestern Pennsylvania on the border between Fayette and Somerset counties. It flows northwest through a gap in Chestnut Ridge and then past Connellsville. It joins the Monongahela River from the southeast at McKeesport, southeast of Pittsburgh.

Upstream from Confluence, Pennsylvania, approximately 6 miles (9.7 km) north of Pennsylvania border, the river is impounded by the 184-foot-high (56 m) Youghiogheny Dam to form the Youghiogheny River Lake, a reservoir that stretches upstream into northern Maryland. The dam was completed in 1944 primarily for flood control. 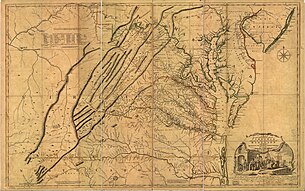 In the colonial era and in the early United States, the valley of the river provided an important route of access through the mountains for settlers and military forces from Virginia to western Pennsylvania and the Ohio Country. In 1754, as a militia officer of the British Colony of Virginia, George Washington followed the river in an attempt to find a water route to Fort Duquesne, then held by the French.

During the uncommonly severe winter of 1787-88, American pioneers to the Northwest Territory departed New England and cut trails westward through the mountains. At Sumrill’s Ferry, present-day West Newton, Pennsylvania, on the Youghiogheny River, the men built flatboats which carried them down the Youghiogheny River to the Monongahela River, and then to the Ohio River, and onward to the Northwest Territory.[8]

Coal mining became an important industry along the lower Youghiogheny River during the 19th century. At that time, the name was often spelled Yohoghany (or variants thereof), and during the 1860s and 1870s that spelling was used as the name of a post office near what is now Shaner in Westmoreland County.

Fallingwater, designed by Frank Lloyd Wright, is located in the river valley southeast of Connellsville.

In 1976, a 21-mile long segment of the Youghiogheny in Maryland was given special protected status by the state as the Youghiogheny Scenic & Wild River. Though most of the land along this corridor is private, it is managed by the Maryland Department of Natural Resources to preserve its natural and cultural resources.[9]

The Youghiogheny is popular for whitewater canoeing, kayaking and rafting. Three sections of the river, varying in difficulty, are available on a predictable basis for whitewater recreation:

Although the Youghiogheny is generally considered to be safe for whitewater recreation, there have been 19 deaths on the Lower Yough. At least five, and possibly as many as 14, of the fatalities have occurred at a rapid within the Lower Yough known as Dimple Rock.[11] Dimple refers to both the Class III rapid by that name, as well as an undercut rock in the middle of the rapid by that name.[12] Some of the deaths were attributed to preexisting health conditions, with 9 of the 14 being caused by the rock itself.

The Youghiogheny is also known for fishing, having brown and rainbow trout, as well as smallmouth above the power plant discharge.

Part of the Great Allegheny Passage, a multi-use trail along the former Western Maryland Railway right-of-way, extends from Pittsburgh to Confluence. From Confluence, it connects to Washington, D.C.

Amtrak’s Capitol Limited, an overnight train connecting Chicago and Washington D.C., follows the Youghiogheny through southwest Pennsylvania into western Maryland, one of the most scenic stretches of Amtrak’s national system, crossing from side to side of the river in several places.

Main article: List of crossings of the Youghiogheny River

The Great Crossings is the place on the river where George Washington and General Braddock forded the river in revolutionary times.

The Youghiogheny River was likely the inspiration for the fictional Yuggogheny River, whose valley was used by Michael Chabon for the setting of his short story "In the Black Mill" from the 2000 collection Werewolves in their Youth. His 2001 story "The God Of Dark Laughter" is also set in Yuggogheny County. In Chabon's 2000 Pulitzer Prize-winning novel The Amazing Adventures of Kavalier & Clay, an expert or experts on Yuggogheny cannibal cults are present at the party where Joe Kavalier saves Salvador Dalí from drowning.

The Youghiogheny River is mentioned (malapropped as "Young-iogheny") in an episode of the Rocky and Bullwinkle cartoon show. The river is also referred to (as Yochio Geni) in Thomas Pynchon's novel Mason & Dixon.

Retrieved from "https://en.wikipedia.org/w/index.php?title=Youghiogheny_River&oldid=956027775"
Categories:
Hidden categories:
The article is a derivative under the Creative Commons Attribution-ShareAlike License. A link to the original article can be found here and attribution parties here. By using this site, you agree to the Terms of Use. Gpedia Ⓡ is a registered trademark of the Cyberajah Pty Ltd.