The Zagros Mountains (Persian: کوه‌های زاگرس‎; Kurdish: چیاکانی زاگرۆس ,Çiyayên Zagros‎;[2][3] Lurish: کۆیَل زاگروس)[citation needed] are a long mountain range in Iran, Iraq and southeastern Turkey. This mountain range has a total length of 1,600 km (990 mi). The Zagros mountain range begins in northwestern Iran and roughly follows Iran's western border, while covering much of southeastern Turkey and northeastern Iraq. From this border region, the range roughly follows Iran's coast on the Persian Gulf. It spans the whole length of the western and southwestern Iranian plateau, ending at the Strait of Hormuz. The highest point is Mount Dena, at 4,409 metres (14,465 ft). 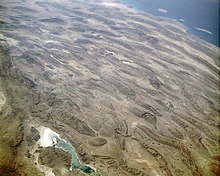 The Zagros Mountains from space, September 1992[4]

The Zagros fold and thrust belt was mainly formed by the collision of two tectonic plates, the Eurasian Plate and the Arabian Plate.[5] This collision mainly happened during the Miocene (about 25–5 million years ago or mya) and folded the entirety of the rocks that had been deposited from the Paleozoic (541–242 mya) to the Cenozoic (66 mya – present) in the passive continental margin on the Arabian Plate. However, the obduction of Neotethys oceanic crust during the Cretaceous (145–66 mya), and the continental arc collision in the Eocene (56–34 mya) both had major effects on uplifts in the northeastern parts of the belt.

The process of collision continues to the present, and as the Arabian Plate is being pushed against the Eurasian Plate, the Zagros Mountains and the Iranian Plateau are getting higher and higher. Recent GPS measurements in Iran[6] have shown that this collision is still active and the resulting deformation is distributed non-uniformly in the country, mainly taken up in the major mountain belts like Alborz and Zagros. A relatively dense GPS network which covered the Iranian Zagros[7] also proves a high rate of deformation within the Zagros. The GPS results show that the current rate of shortening in the southeast Zagros is ~10 mm/a (0.39 in/year), dropping to ~5 mm/a (0.20 in/year) in the northwest Zagros. The north-south Kazerun strike-slip fault divides the Zagros into two distinct zones of deformation. The GPS results also show different shortening directions along the belt, normal shortening in the southeast, and oblique shortening in the northwest Zagros. The Zagros mountains were created around the time of the second ice age,[citation needed] which caused the tectonic collision, leading to its uniqueness.

The sedimentary cover in the SE Zagros is deforming above a layer of rock salt (acting as a ductile decollement with a low basal friction), whereas in the NW Zagros the salt layer is missing or is very thin. This different basal friction is partly responsible for the different topographies on either side of the Kazerun fault. Higher topography and narrower zone of deformation in the NW Zagros is observed whereas in the SE, deformation was spread more and a wider zone of deformation with lower topography was formed.[8] Stresses induced in the Earth's crust by the collision caused extensive folding of the preexisting layered sedimentary rocks. Subsequent erosion removed softer rocks, such as mudstone (rock formed by consolidated mud) and siltstone (a slightly coarser-grained mudstone) while leaving harder rocks, such as limestone (calcium-rich rock consisting of the remains of marine organisms) and dolomite (rocks similar to limestone containing calcium and magnesium). This differential erosion formed the linear ridges of the Zagros Mountains.

The depositional environment and tectonic history of the rocks were conducive to the formation and trapping of petroleum, and the Zagros region is an important area for oil production. Salt domes and salt glaciers are a common feature of the Zagros Mountains. Salt domes are an important target for petroleum exploration, as the impermeable salt frequently traps petroleum beneath other rock layers. There is also much water-soluble gypsum in the region.[9]

Type and age of rock

The mountains are completely of sedimentary origin and are made primarily of limestone. In the Elevated Zagros or the Higher Zagros, the Paleozoic rocks can be found mainly in the upper and higher sections of the peaks of the Zagros Mountains, along the Zagros main fault. On both sides of this fault, there are Mesozoic rocks, a combination of Triassic (252–201 mya) and Jurassic (201–145 mya) rocks that are surrounded by Cretaceous rocks on both sides. The Folded Zagros (the mountains south of the Elevated Zagros and almost parallel to the main Zagros fault) is formed mainly of Tertiary rocks, with the Paleogene (66–23 mya) rocks south of the Cretaceous rocks and then the Neogene (23–2.6 mya) rocks south of the Paleogene rocks. The mountains are divided into many parallel sub-ranges (up to 10 or 250 km (6.2 or 155.3 mi) wide), and orogenically have the same age as the Alps. 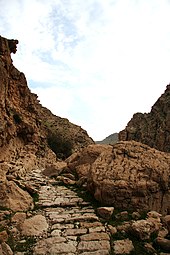 The Zagros Mountains were occupied by early humans since the Lower Paleolithic Period. The earliest human fossils discovered in Zagros belongs to Neanderthals and come from Shanidar Cave, Bisitun Cave, and Wezmeh Cave. The remains of ten Neanderthals, dating from around 65,000-35,000 years ago, have been found in the Shanidar Cave.[10] The cave also contains two later "proto-Neolithic" cemeteries, one of which dates back about 10,600 years and contains 35 individuals.[11] Coon who excavated Bisitun Cave described two hominid remains from the site, a maxilliary upper incisor and a radius shaft fragment, both from a Layer designated F+. These remains were listed but never described fully for the palaeontological community. When they were finally reexamined four decades later, the incisor was found to be of bovine, rather than hominid origin.[8] The radius fragment was found to show Neanderthal affinities, as it is mediolaterally expanded at the interosseus crest. Metrically, it is outside the range of variation of early anatomically modern humans, but in the range of Neanderthals and early Upper Paleolithic humans.[12]

The radius fragment also showed signs of scavenging carnivores or rodents, such as jackal and fox, the remains of which were also found at the site. Wezmeh Child or Wezmeh 1 represented by an isolated unerupted human maxillary right premolar tooth (P3 or possibly P4) of an individual between 6–10 years old.[13] Evidence from later Upper Paleolithic and Epipaleolithic occupations come from Yafteh Cave, Kaldar Cave near Khoramabad, and Warwasi, Malaverd near Kermanshah, Kenacheh Cave in Kurdistan, Boof Cave in Fars and a number of other caves and rock shelters.[14]

Location map of the Wezmeh Cave in the range of Neanderthals

Signs of early agriculture date back as far as 9000 BC in the foothills of the mountains.[15] Some settlements later grew into cities, eventually named Anshan and Susa; Jarmo is one archaeological site in this area. Some of the earliest evidence of wine production has been discovered in the mountains; both the settlements of Hajji Firuz Tepe and Godin Tepe have given evidence of wine storage dating between 3500 and 5400 BC.[16]

During early ancient times, the Zagros was the home of peoples such as the ancestors of the Sumerians and, later, the Kassites, Guti, Elamites and Mitanni, who periodically invaded the Sumerian and/or Akkadian cities of Mesopotamia. The mountains create a geographic barrier between the Mesopotamian Plain, which is in Iraq, and the Iranian Plateau. A small archive of clay tablets detailing the complex interactions of these groups in the early second millennium BC has been found at Tell Shemshara along the Little Zab.[17] Tell Bazmusian, near Shemshara, was occupied between 5000 BCE and 800 CE, although not continuously.[18]

The mountains contain several ecosystems. Prominent among them are the forest and forest steppe areas with a semi-arid climate. As defined by the World Wildlife Fund and used in their Wildfinder, the particular terrestrial ecoregion of the mid to high mountain area is Zagros Mountains forest steppe (PA0446). The annual precipitation ranges from 400–800 mm (16–31 in) and falls mostly in winter and spring. Winters are severe, with low temperatures often below −25 °C (−13 °F). The region exemplifies the continental variation of the Mediterranean climate pattern, with a snowy winter and mild, rainy spring, followed by a dry summer and autumn.[19] 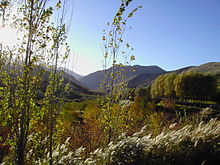 A view of Persian oak forests that dominate the Zagros Mountains 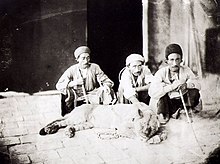 Men with a restrained lion in Iran. This photograph was taken by Antoin Sevruguin, ca. 1880,[25] before the lion's extirpation in the country.

Although currently degraded through overgrazing and deforestation, the Zagros region is home to a rich and complex flora. Remnants of the originally widespread oak-dominated woodland can still be found, as can the park-like pistachio/almond steppelands. The ancestors of many familiar foods, including wheat, barley, lentil, almond, walnut, pistachio, apricot, plum, pomegranate and grape can be found growing wild throughout the mountains.[26] Persian oak (Quercus brantii) (covering more than 50% of the Zagros forest area) is the most important tree species of the Zagros in Iran.[27] In the late 19th century, the Asiatic lion (Panthera leo persica)[29] inhabited the southwestern part of the mountains. It is now extinct in this region.[30]

Retrieved from "https://en.wikipedia.org/w/index.php?title=Zagros_Mountains&oldid=967383770"
Categories:
Hidden categories:
The article is a derivative under the Creative Commons Attribution-ShareAlike License. A link to the original article can be found here and attribution parties here. By using this site, you agree to the Terms of Use. Gpedia Ⓡ is a registered trademark of the Cyberajah Pty Ltd.