The Georgia Tech Yellow Jackets is the name used for all of the intercollegiate athletic teams that represent the Georgia Institute of Technology (Georgia Tech), located in Atlanta, Georgia. The teams have also been nicknamed the Ramblin' Wreck, Engineers, Blacksmiths, and Golden Tornado. There are eight men's and seven women's teams that compete in the National Collegiate Athletic Association (NCAA) Division I athletics and the Football Bowl Subdivision. Georgia Tech is a member of the Coastal Division in the Atlantic Coast Conference.

The official school colors for Georgia Tech are tech gold and white.[2] Navy blue is often used as a secondary color and for alternate jerseys, while black has been used on rare occasion. The traditional rival in all sports is in-state University of Georgia. This rivalry is often referred to as Clean, Old-Fashioned Hate. There are also rivalries with out-of-state Auburn and official conference rival Clemson.

The athletic department is run by the Georgia Tech Athletic Association, a private organization located on campus. The department dedicates about $53 million per year to its sports teams and facilities. Since November 28, 2016 the athletic director of Georgia Tech has been Todd Stansbury, who replaced Mike Bobinski after the latter left for the same position at Purdue.[3] Most athletic teams have on-campus facilities for competition, including Bobby Dodd Stadium at Historic Grant Field for football, the McCamish Pavilion at Cremins' Court for men's and women's basketball, and Russ Chandler Stadium for baseball.

Georgia Tech was a founding member of the Southern Intercollegiate Athletic Association in 1895. Georgia Tech was one of the 14 schools that split to found the Southern Conference in 1921. Thirteen schools including Georgia Tech split in 1932 to form the Southeastern Conference.[4] In 1956, the Yellow Jackets played in the first integrated Sugar Bowl game under civil rights advocate Blake Van Leer's tenure.[5] The Yellow Jackets left the SEC in 1964 and remained independent until becoming a founding member of the Metro-6 Conference in 1975.[6] Georgia Tech moved to the ACC in 1978 and began competition within the ACC in 1979.[6]

The Georgia Institute of Technology sponsors teams in eight men's and seven women's NCAA sanctioned sports.[7] Georgia Tech is the only Power Five school that does not sponsor women's soccer.[citation needed] 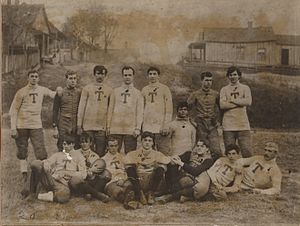 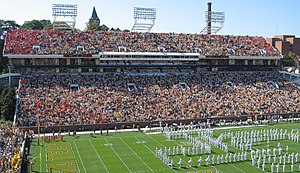 The football team is traditionally the most popular at the Institute. The games are played at Bobby Dodd Stadium at Historic Grant Field or simply The Flats, which is the oldest on-campus stadium in Division I FBS football. The stadium was expanded in recent years, increasing the maximum capacity to 55,000.

Georgia Tech plays an Atlantic Coast Conference Coastal Division schedule in addition to yearly cross divisional games against Clemson[8] and two other Atlantic Division teams. In addition, the team has a yearly out-of-conference meeting with Georgia at the end of the season known as Clean, Old-Fashioned Hate.

The most recent head coach is former Dallas Cowboys head coach Chan Gailey. In five seasons, Chan Gailey posted a 37–27 record, 5 straight bowl berths, and a 2–3 record in bowl games.[needs update] Chan's 5 straight bowl appearances have the Jackets at 10 in a row overall, an active streak tied for 5th longest in the nation.[11][needs update] Chan Gailey was fired on Monday, November 26, 2007. A nationwide search for a new head coach then began, which was ended when highly regarded Navy coach Paul Johnson was hired on December 9, 2007.[12]

The Georgia Tech men's basketball team plays its home games in the new McCamish Pavilion The program saw its most sustained success under the tenure of Bobby Cremins. Bobby Cremins led his team to the first ACC tournament victory in school history in 1985, and in 1990 he took Georgia Tech to the school's first Final Four appearance ever. Cremins retired from Georgia Tech in 2000 with the school's best coaching win percentage.

The current head coach of Georgia Tech is Josh Pastner, who took over from Brian Gregory in 2016. Up until March 2011, Paul Hewitt was the head coach Georgia Tech. Helping revitalize a stagnant program in 2004, he led Georgia Tech to a Cinderella season as the school earned its second berth in an NCAA national title game in any sport. That team won the Pre-Season NIT, ended Duke's 41 game home winning streak, and finished its season losing by 9 points in the national title game to Connecticut. Hewitt was fired on March 12, 2011 after having three losing seasons over the previous four years.[13]

Like the men's team, the women's basketball team plays its home games in McCamish Pavilion. The current women's coach is Nell Fortner, former US Women's National Team coach from 1997-2000.[14]

Baseball is a very successful sport at Georgia Tech. The baseball team makes its home at Russ Chandler Stadium, and is one of the premier baseball teams in the NCAA. Georgia Tech baseball is notable for its high-scoring offenses, and stout defenses.

The team's success is guided by head coach Danny Hall. Hall has coached Tech for 13 seasons and has posted 579 wins over that span. He has led Georgia Tech to 12 years of NCAA regional play, and its only three College World Series appearances in 1994, 2002, and 2006. The baseball team, under Hall, has become an annual contender for the ACC regular season and tournament titles winning each four and three times respectively.

Georgia Tech Yellow Jackets men's golf team is one of the most consistent Yellow Jacket teams. They have won 19 conference championships:[19]

The men's golf team made the NCAA Championship round ten straight years (1998–2007) under Bruce Heppler, head coach since 1996. In 2005, the program was rated by Golf Magazine as the #1 collegiate golf program in the country.

The women's tennis team became the first NCAA National Champion in Georgia Tech team sports history by winning 4–2 over UCLA in Athens, Georgia on May 22, 2007.[20][21] The 2007 National Championship team was coached by Bryan Shelton. As a player in his freshman season (1985), Shelton won Georgia Tech's first individual ACC title.[22] The women's tennis team is currently coached by Rodney Harmon, and assisted by Christy Lynch.

The men's team has won six conference titles since 1918 (one in the SIAA, two in the SoConn, and three in the SEC). They have made 15 NCAA Tournament appearances. The men's tennis team is currently coached by former Georgia Tech player Kenny Thorne, and assisted by Jeremy Efferding.[23] In 2011, Thorne was named ITA National Coach of the Year.

Georgia Tech Women's Volleyball is one of the newer additions to Georgia Tech's athletic department, having only been started in the past twenty years. Despite the program's youth, it has been a dominant force in the ACC.[citation needed] O'Keefe Gymnasium has served as the home of the Georgia Tech volleyball team since 1995.[24]

Georgia Tech volleyball has become a powerful, perennial ACC title contender and NCAA tournament qualifier. Tech has been in the NCAA tournament three times in recent years and has set several school records for victories in a season, consecutive ACC victories, and consecutive victories. 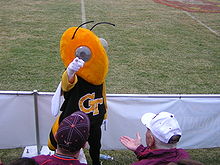 Costumed in plush to look like a yellow jacket, the official mascot of Georgia Tech is Buzz. Buzz enters the football games at the sound of swarming yellow jackets and proceeds to do a flip on the fifty-yard line GT logo. He then bull rushes the goal post and has been known to knock it out of alignment before football games. Buzz is also notorious for crowd surfing and general light-hearted trickery amongst Tech and rival fans.

The Ramblin' Wreck was the first official mascot of Georgia Tech. It is a 1930 Ford Model A Sports Coupe. The Wreck has led the football team onto the field every home game since 1961. The Wreck features a gold and white paint job, two gold flags emblazoned with the words "To Hell With Georgia" and "Give 'Em Hell Tech", and a white soft top. The Wreck is maintained by the Ramblin' Reck Club, a selective student leadership organization on campus.[26] 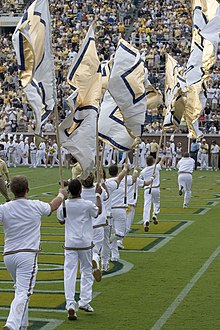 The Ramblin' Reck Club is charged with upholding all school traditions and creating new traditions such as the SWARM. The SWARM is a 900-member spirit group seated along the north end zone or on the court at basketball games. This is the group that typically features body painting, organized chants, and general fanaticism.

The marching band that performs at halftime and after big plays during the football season is clad in all white and sits next to SWARM at football games providing a dichotomy of white and gold in the North End Zone. The band is also the primary student organization on campus that upholds the tradition of RAT caps, wherein band freshman wear the traditional yellow cap at all band events.

The band plays the fight songs Ramblin' Wreck from Georgia Tech and Up With the White and Gold after every football score and between every basketball period. At the end of a rendition of either fight song, there is a series of drum beats followed by the cheer "Go Jackets" three times (each time followed by a second cheer of "bust their ass"), then a different drum beat and the cheer "Fight, Win, Drink, Get Naked!" The official cheer only includes "Fight, Win" but most present other than the band and cheerleaders will yell the extended version.

It is also tradition for the band to play the "When You Say Budweiser" after the third quarter of football and during the second-to-last official timeout of every basketball game. During the "Budweiser Song", all of the fans in the stadium alternate bending their knees and standing up straight. Other notable band songs are Michael Jackson's Thriller for half-time at the Thrillerdome, Ludacris' Move Bitch for large gains in football. Another popular chant is called the Good Word and it begins with asking, "What's the Good Word?" The response from all Tech faithful is, "To Hell With Georgia." The same question is asked three times and then the followup is asked, "How 'bout them dogs?" And everyone yells, "Piss on 'em."

Below are 4 national team titles that were not bestowed by the NCAA: