KGO (810 AM) is a commercial radio station licensed to San Francisco, California. It is one of two talk radio stations in the San Francisco Bay Area owned by Cumulus Media. The other is 560 KSFO. While KSFO airs mostly nationally syndicated talk hosts, KGO runs mostly local hosts on weekdays. KGO operates with 50,000 watts, the highest power permitted AM radio stations by the Federal Communications Commission. But it uses a directional antenna to protect the other Class A station on 810 kHz, WGY in Schenectady, New York. Most nights, using a good radio, KGO can be heard throughout the Western United States east to the Rocky Mountains, and in Northern Mexico, Western Canada and Alaska.

KGO has its studios and offices on Battery Street in the SoMa portion of San Francisco's Financial District. Its transmitter site is based in Fremont near the Dumbarton Bridge. Its towers are noticeable enough that pilots use them as a waypoint in communications with local airports. Two of KGO's three towers partially collapsed during the Loma Prieta earthquake on October 17, 1989. All three were replaced.[1]

After several late-night test broadcasts, using the experimental call sign 6XG, radio station KGO signed on the air on January 8, 1924, from General Electric's Oakland transformer manufacturing plant. The original two-story brick building, constructed specifically for the station on East 14th Street, was demolished sometime in the 1980s.[2]) KGO was part of a planned three-station network comprising WGY in Schenectady, New York, and KOA in Denver, Colorado. KGO was first known as the "Sunset Station" since it was General Electric's West Coast outlet. At that time it operated with a then-impressive 1000 watts.[3]

As was the custom with early radio stations, the programming consisted of performances by local talent, including the KGO Orchestra which provided some of the music, and a dramatic group known as the KGO Players, which performed weekly plays and short skits, often under the direction of Bay-area drama instructor Wilda Wilson Church. The station's music, which was also performed by other local orchestras and vocalists, included classical selections as well as popular dance music the next night. Due to GE's involvement in RCA and RCA's launch of the NBC Red Network, KGO was soon operated by NBC management out of studio facilities in San Francisco. See the KNBR entry for a fuller discussion of NBC's San Francisco radio operations.

In 1941, stations on 790, including WGY and KGO, were moved to 810 to comply with the North American Regional Broadcasting Agreement (NARBA). On December 1, 1947, KGO switched to a directional antenna and its power was increased to 50,000 watts, the new minimum standard power for a U.S. clear channel station. An article in Broadcasting magazine noted that the increase "retired the nation's oldest regularly operating transmitter-a 7,500-watter ... in use since Jan. 8, 1924."[4]

When the Federal Communications Commission forced NBC to sell one of its two networks (and that network's owned-and-operated stations), KGO's license switched from Radio Corporation of America to the Blue Network, Inc., effective January 23, 1942.[5] The NBC Blue Network simply dropped "NBC" from its name to become the "Blue Network," then in June 1945 re-branded itself the American Broadcasting Company. KGO became one of the founding stations of the ABC Radio Network as a result.

In the postwar period, KGO produced many live music programs, including that of Western Swing bandleader Bob Wills, whose music was a staple of the time. KGO was instrumental in bringing the first exercise show to broadcasting, hosted by Jack LaLanne, a fitness instructor and gym operator in nearby Oakland. LaLanne conducted his radio fitness show for many years on KGO, moving in the late 1950s to KGO-TV and a successful TV syndication career.

By the late 1950s, KGO had suffered poor ratings. In 1962, ABC management brought in new management including program director Jim Dunbar, who revamped the station into one of the country's first news/talk stations. While the new format was initially unsuccessful, Dunbar stressed the "live and local" aspect of the programming by running the talk shows every day from locations such as Johnny Kan's Chinese restaurant, Señor Pico's Restaurant, and the legendary hungry i nightclub. This higher profile caused KGO's ratings to begin a steady climb. Among KGO's personalities during this period was future Radio Hall of Fame member J.P. McCarthy, the station's morning host in the early 1960s.

For more than 27 years (as rated quarterly by Arbitron), KGO was the number-one station in the Bay Area. According to the 2010 Arbitron ratings, however, KGO had lost its lead to KCBS, with KOIT-FM as a close second, and KGO listing at third.[citation needed] When KGO switched to all-news in December 2011, it fell further behind in the local ratings. As of Spring 2013, KGO placed 16th in the market, with approximately half of their listenership when they were number one.[6]

The KGO signal also registers with Arbitron as a station listened to in surrounding metropolitan areas. Due to the nature of its signal and antenna placement, KGO broadcasts on a north-to-south axis, keeping itself from interfering with WGY (Schenectady, New York) during the night-time and overnight hours when the station broadcasts at 50,000 watts. KGO's signal is received essentially free of static at night in locations such as Vancouver, Washington, Seattle, Washington and San Diego, but is difficult to receive in Reno, Nevada, and other points east of the Sierra Nevada mountains due to its signal directionality. That said, its overall reach is greater than any FM signal in the Bay Area (according to radio-locator.com map referenced below). 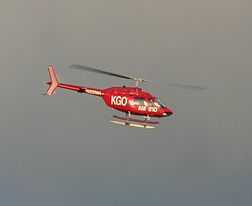 On Friday, December 2, 2011, new owner Cumulus Media announced that KGO was rebranding itself as "news and information," moving to an all-news format from 2 p.m. to 7 p.m. (in addition to the existing morning-drive, noon-hour and afternoon-drive news blocks) on December 5.[9][10] This had resulted in the abrupt termination, on December 1, of most of the talk hosts (including Gene Burns, Gil Gross, John Rothmann, Ray Taliaferro, Len Tillem, and Dr. Bill Wattenburg). Ronn Owens's morning show, as well as weekend talk programming remained, although some of the weekend hosts (including Joanie Greggains, and Len Tillem) were also terminated on December 1, 2011. Bob Brinker's syndicated "Moneytalk" has been moved to KSFO, a politically conservative talk radio sister station which arguably better reflects Brinker's conservative politico-economic views ("Moneytalk" is a brand which is owned by ABC and its successor, not by Brinker; Brinker's own brand is "Marketimer", although Brinker has not and does not espouse market timing, as commonly understood, per se in any of his broadcasts or newsletters). Leo Laporte's weekend syndicated tech talk program was also a casualty of the format change and is no longer being broadcast on KGO.[11] Gil Gross, Len Tillem and Leo Laporte are being broadcast by KKSF.

The format change and termination of many popular talk show hosts sparked outrage among long-time listeners, many of whom called for sponsors to drop their advertising on the station.[12] Ratings declined substantially following the change, with competitors KCBS and KQED-FM continuing to lead the market, and in December 2014, KGO reintroduced talk programming on weekdays.[13] In December 2014, KGO added Chip Franklin to the noon to 3 pm lineup.[14] In January 2015, KGO announced they had hired Chicago/San Antonio radio personality Kevin "DreX" Buchar, best known for his successful morning show on Chicago's WKSC-FM, which ran for more than a decade, from 7PM to 10PM.[15] John Batchelor's syndicated show air overnights, returning KGO to the same level of news programming as before 2011.[16]

KGO's ident under an all-news format.

On March 31, 2016, at Noon, KGO dropped its previous programming and began stunting with recordings of speeches from influential figures and people talking about San Francisco, as well as songs about the city, while promoting "The Next Generation of KGO" to launch on April 5 (though with a break during the weekend for paid programming). At least 20 people, including the entire news staff, as well as some staffers from sister station KFOG, were laid off with the change.[17][18][19] Originally, long-time KGO host Ronn Owens announced that he would be moving to sister station KSFO in the afternoon slot beginning April 4. However, due to what was advertised as a 'listener reaction' against the move (in reality, Owens contested the move of his show off KGO as against the terms of his contract), Owens left with the station. KGO will also keep its News/Talk format, but will launch with a new live and local lineup, which includes Owens and Armstrong & Getty in mornings.[20]

KGO was the radio broadcast home for the San Francisco 49ers football team from 1987 to 2005. It has broadcast the college football games of the University of California, Berkeley, Golden Bears since 1974. Since 2013, it also broadcasts men's basketball games that start after 7 pm or are on weekends. Games that start before 7 pm on weekdays air on KSFO.[13]

Until the sudden format change in December 2011, KGO hosted an annual fundraiser called the KGO Cure-a-Thon to help raise money for The Leukemia & Lymphoma Society with all of the station's regular programming pre-empted for an entire day during the event. Listeners were encouraged to call in and donate money to help in the fight against these kinds of cancer. An auction was also held to help raise money. Notable items up for auction have included a trip with Gene Burns on a private jet to various destinations, such as Las Vegas and Italy, for a gourmet dinner. Cumulus Media has announced that it will not be continuing the KGO Cure-a-Thon charity event despite the fact it has raised millions of dollars for charity in the past.

In March 2008, solar panels were installed at KGO's transmitter site in Fremont, California, to offset some of its power consumption during daytime hours.[21] The effort is a testbed for Pacific Gas and Electric Company and is located near the Dumbarton Bridge.[22] The solar system uses both CPV (SolFocus) and PV (Premier Power) arrays and provides about 17 Kilowatts, or 33% (one third), of the radio frequency (RF) power output from the 50KW transmitter (or about 1/10th of the total power consumption of their transmitter site over a 24-hour period). United States Speaker of the House Rep. Nancy Pelosi turned the system on during an on-air ceremony.[23]

Weekends feature shows on money, health, technology and home repairs, some of which are paid brokered programming. Syndicated weekend shows include The Tech Guy with Leo Laporte and The Truth About Money with Ric Edelman. KGO is the flagship radio station for the San Francisco 49ers football team and also carries University of California Golden Bears Football. Most hours begin with world and national news from ABC Radio News.