This is a list of broadcast station classes applicable in much of North America under international agreements between the United States, Canada and Mexico. Effective radiated power (ERP) and height above average terrain (HAAT) are listed unless otherwise noted.

All domestic (United States) AM stations are classified as A, B, C, or D. [1]

AM station classes were previously assigned Roman numerals from I to IV in the US, with subclasses indicated by a letter suffix. Current class A is equivalent to the old class I; class B is the old classes II and III, with class D being the II-D, II-S, and III-S subclasses; and class C is the old class IV.

AM station classes and clear channels listed by frequency

The following chart lists frequencies on the broadcast company band, and which classes broadcast on these frequencies; Class A and Class B, 10,000 watt and higher (full-time) stations in North America which broadcast on clear-channel station frequencies are also shown.

Because the AM broadcast band developed before technology suitable for directional antennas, there are numerous exceptions, such as the US use of 800 (kHz) and 900 non-directionally in Alaska, limited to 5 kW at night; and 1050 and 1220, directionally, in the continental US, and without time limits; each of these being assigned to specific cities (and each of these being Mexican Class I-A clear channels). In return for these limits on US stations, Mexico accepted limits on 830 and 1030 in Mexico City, non-directionally, restricted to 5 kW at night (both of these being US Class I-A clear channels). 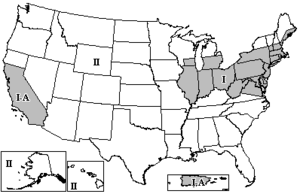 FM broadcast zones in the US

The US is divided into three zones for FM broadcasting: I, I-A and II. The zone where a station is located may limit the choices of broadcast class available to a given FM station.

Zone I in the US includes all of Connecticut, the District of Columbia, Delaware, Illinois, Indiana, Massachusetts, Maryland, New Jersey, Ohio, Pennsylvania, Rhode Island, and West Virginia. It also includes the areas south of latitude 43.5°N in Michigan, New Hampshire, New York, and Vermont; as well as coastal Maine, southeastern Wisconsin, and northern and eastern Virginia.

Zone I-A includes California south of 40°N, as well as Puerto Rico and the US Virgin Islands.

Zone II includes the remainder of the continental US, plus Alaska and Hawaii.

Full-power stations in the US

All full-power analog television station transmissions in the US were terminated at midnight Eastern Daylight Time on June 12, 2009.[7][8] Many broadcasters replaced their analog signal with their digital ATSC signal on the same transmission channel at that time.

LPTV (secondary) (suffix: -LP, or a sequential-numbered callsign in format W##XX with no suffix for analog or with -D suffix for digital, or -LD for low-power digital stations):

The LPTV (low-power television) service was created in 1982 by the FCC to allocate channels for smaller, local stations, and community channels, such as public access stations. LPTV stations that meet additional requirements such as children's "E/I" core programming and Emergency Alert System broadcasting capabilities can qualify for a Class A (-CA) license.[12]

Broadcast translators, boosters, and other LPTV stations are considered secondary to full-power stations, unless they have upgraded to class A. Class A is still considered LPTV with respect to stations in Canada and Mexico.

Class A television (US)

The class-A television class is a variant of LPTV created in 2000 by the FCC to allocate and protect some low-power affiliates. Class-A stations are still low-power, but are protected from RF interference and from having to change channel should a full-service station request that channel.[13]

In Canada, there is no formal transmission power below which, a television transmitter is considered broadcasting at low power. Industry Canada considers that a low power digital television undertaking "shall not normally extend a distance of 20 km in any direction from the antenna site," based on the determined noise-limited bounding contour.[14]

The equivalent of low power or translator service in Mexico is the equipo complementario de zona de sombra, which is intended only to fill in gaps between a station's expected and actual service area caused by terrain; a station of this type shares the callsign of another station. In analog, these services often were broadcast on the same or adjacent channels to their parent station, except in certain areas with tight packing of television stations (such as central Mexico). In digital, these services usually operate on the same RF channel as their parent station, except for those with conflicting full-power applications (XHBS-TDT Cd. Obregón, Son., channel 30 instead of 25), in certain other cases where it is technically not feasible (XHAW-TDT Guadalupe, NL, channel 26 instead of 25) or to make way for eventual repacking on upper UHF (XHPNW-TDT has four shadows on 33, its post-repacking channel, instead of 39).

Equipos complementarios can relay their parent station, or a station that carries 75% or more of the same programming as its parent station.[15]

Stations of either type may have unusually low or high effective radiated powers. XHSMI-TDT in Oaxaca is licensed for two watts in digital. The highest-powered shadows are XEQ-TDT Toluca and XHBS-TDT Ciudad Obregón, both at 200 kW.

The United States Federal Communications Commission lists the following services on their website for television broadcasting: