WLKQ-FM (102.3 MHz "La Raza 102.3/107.1") is a commercial FM radio station licensed to Buford, Georgia, and serving Metro Atlanta. It is owned by Davis Broadcasting and airs a Regional Mexican radio format. The programming is simulcast on 107.1 WTSH-FM in Aragon.

WLKQ-FM has an effective radiated power (ERP) of 4,200 watts. Its transmitter is off Radio Park Drive in Buford, near Interstate 985.[1] WLKQ-FM broadcasts in the HD Radio hybrid format. Its HD2 subchannel carries a Christian Contemporary music format known as The Joy-FM. Its programming is also heard on FM translator station W223CQ at 92.5 MHz in Lawrenceville. 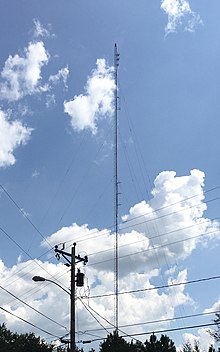 The single broadcasting antenna tower used by WXEM and WLKQ-FM as seen from the northwest in Buford, Georgia.

On January 1, 1970, the station first signed on as WGCO.[2] It was owned by the Buford Broadcasting Company, along with AM 1460 WDYX (now WXEM). The station aired a mix of country music and Christian radio programming.

In 1985, Buford Broadcasting was acquired by the Joseph Family.[3] WCGO-FM's call sign was changed to WLKQ-FM, using the moniker "Lake 102 FM." It began playing an oldies format, and with members of the Joseph Family serving in various roles, "Skipper Bob" was president and general sales manager, his wife Jackie as office manager, son Mark as general manager, and daughter Kathleen, known by her air name as "Kay Mackie."

Eventually the Joseph Family was offered a large price to sell the station, to be targeted to the expanding Spanish-speaking population within the coverage area of the station's former 6,000-watt signal. In 2003, Davis Broadcasting paid $5.25 million to acquire WLKQ-FM.[4] The Oldies format ended in April 2004, as the station began broadcasting Regional Mexican music.